Crimea And Punishment: Who Really Stopped The Russians? 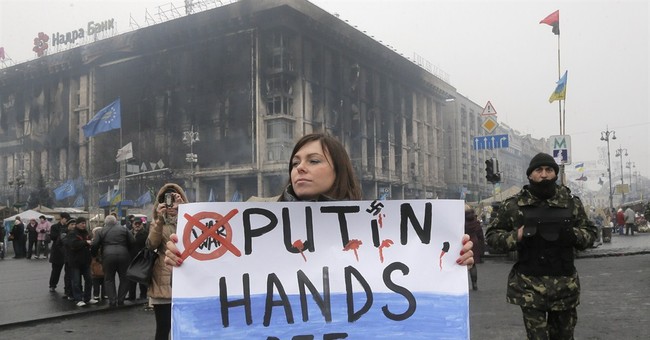 Putin’s recent decision to order Russian troops on Ukraine’s eastern border to return to base was a surprise to many. After all, vague U.S. threats that there would be a price to pay and consequences for the invasion of Ukraine were hardly much of a deterrent. The red line which Obama had painted on the ground in front of Putin ally, Bashar Assad, in Syria, turned out to have been a weak watercolor. Does anyone seriously believe that Russian troops were stopped at the Crimean border by communiques from this White House or the diplomats in Brussels threatening that Russia would no longer be able to send representatives to G8 meetings?

No, Putin was not turned by diplomats or feckless heads of state from the West. He was dissuaded by speculators. Russia was not dissuaded by threats of punishment: Russia was dissuaded by actual punishment, meted out in real time by that most vilified of classes, currency speculators. As Russian troops crashed through turnstiles and over legal international borders, their Rubles crashed too. As international rule of law collapsed, so did the Moscow Stock Exchange’s MICEX Index.

For Russia to invade and annex Ukraine would be an unwise act of imperial overreach. Apart from legal and moral considerations (which are more complicated than either Putin haters or Putin fanboys would admit), Russia simply cannot afford an empire, not even a regional one.

What markets told Putin this week is that he can either have a great empire or he can have a great currency, but not both. The choice is his (which is part of the problem). Putin can expand his economy or he can expand his empire. At least for the moment, he seems to have chosen the better option of the two: To send the troops back to base, their point having been made, to sell natural gas at market price rather than subsidized discounts, to buy client states and rebuild the true foundation of a great nation and productive economy. I pray that lesson is not soon forgotten.