Why I Dissed Republicans at the Tea Party 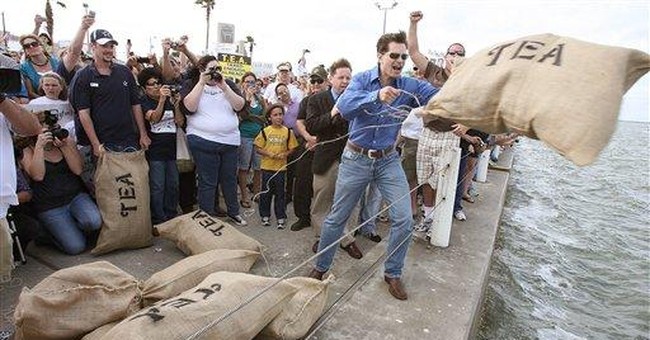 Congratulations and thanks to all who participated in the Tea Parties.  A true grass roots movement is evident when almost every sign is handmade.

I was privileged to be asked to participate as a speaker at the event in Lisle, Illinois, a suburb of Chicago.

Here is, more or less, what I said:

“A moment ago Sandy Rios mentioned John McCain’s comment that government is spending like drunken sailors.  As irresponsible as drunken sailors can be, they are at least spending their own money.

First, here is how I react to our situation today; I am that person the government says that they want to help.  I recently lost my talk show at WLS, so I am an unemployed immigrant.  They think of me as a shovel ready project.  But I don’t want their help.  I don’t need their help.

I believe in myself and my ability to get up every morning and make good things happen – good things that will outnumber the bad things.

I believe in you and your ability to make good things happen.  Don’t you?  Perhaps you will start a company that will one day hire me.

I believe in America – it works if government lets it work.  There is no more level playing field than American capitalism.  When a politician says his project will create jobs, he is using money that was taken from private hands; hands that then cannot use that money to create jobs more efficiently.

I don’t need more government programs.  I am an unemployed immigrant.  I’ll be fine.  I am in America.  I believe in America.  Don’t you?

Next – let’s talk about us.

We gather here, as they gather all across this land today to protest increased taxes, more government programs and mismanagement, and the resultant loss of freedom.

We protest the pork.  But how many of us are the problem?

We protest the pork, but we sure do like that new federally funded Senior Center.

We protest the pork, but we sure do like that new federally funded Bike Overpass

We protest the pork, but we sure do like that new federally funded After School program that babysits our children at taxpayer expense.

We have to be willing to say to the representative who proudly brags about the projects she brought home, that we don’t need Washington and we didn’t send her there to take our money and then pretend to be our friend when she gives it back.

No pork means no pork.  Let’s make sure that we are not the problem.

We can do it without Washington.  I believe in us.  Don’t you?

Now let me talk about them.  The elected officials.  The incumbents.

Homeland security is already calling all of us here at this party a bunch of right wing radicals – so we may as well think about a radical solution.

The incumbents have to go.

A lot of Republicans are excited because they think this day is about them.  Don’t get me wrong.  The Democrats generally ARE the problem.  But how much help have the Republicans been lately?

George Bush talked about ending a huge government program – social security – but he backed off.  The Republicans did talk in 2001 about a looming housing crisis, but Chris Dodd and Barney Frank called them racists, so they spinelessly backed off.

When an incumbent politician of any party asks for your vote – back off.

They say that they “get it.”  But they “get it” in a government sort of way.  They always have a solution that involves another government program.  They won’t get it until they are startled into the realization that this is not about them.  It is not about Fox News as CNN seems to think it is.  It is about a political class and a citizen class.  The incumbent political class has to go.

I am not saying not to elect Republicans.  I am saying, elect new ones.  We have a lot of smart people in America who have not yet been elected to office.  Perhaps a new set of Democrats who were elected under this scenario would respect the people a bit more than Nancy Pelosi does.

Imagine a day in DC when every member of congress is brand new.  No long term deals and relationships.  No favored programs.  No favors to call in or to honor.

Sure this is a fun day.  But there are hard decisions to make, and hard work to do.  I am willing.  Are you?”

The Coma Before the Storm
Townhall
'This is NOT spying': Don't look now, but the DOJ subpoena stories about Adam Schiff and Don McGahn appear to be blowing up
Twitchy
Bill Maher Tells the Young and Woke White Power Isn't at a Historic High
Redstate
Turks Enraged as Ancestry.com Reveals the Truth: Most of Them Are Greeks
PJ Media