Puerto Rico in Self Destruction

Jeremiah Cuevas
|
Posted: Apr 14, 2016 12:01 AM
Share   Tweet
The opinions expressed by columnists are their own and do not necessarily represent the views of Townhall.com. 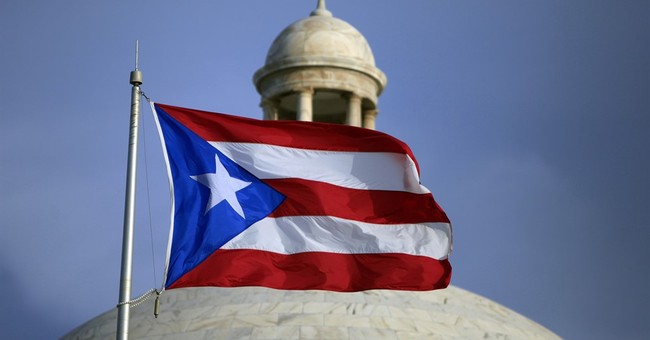 Puerto Rico is a beautiful lush paradise that attracts over 3 million tourists each year, with sun swept beaches and tourists soaked in rum. But, amidst the wonderfully gregarious people, and palm trees, there lies a cancer that we in America know all too well. To put it simply, Puerto Rico, like Greece and others, has been living beyond its means.

At the root of this problem is the growth socialism. With a population of over just 3 million, Puerto Rico only has a workforce of just over 1 million making an average hourly income of under $10 an hour. To put things into perspective the average hourly income in the US is $20.40, that fact in mind the commonwealth's problem of overspending becomes more apparent. Coupling the income deficit with an overdeveloped welfare state, only underlines the severity.

Puerto Rican Governor Alejandro Garcia Padilla, who has described the Puerto Rican economy as being "in a death spiral," is looking to our federal government for help, but is a bailout the answer? The American people know all too well what happens when the United States gets into the banking business.

Between the bailouts of both the auto industry costing American taxpayers $16.6 billion and the bank bailouts, the Special Inspector General for Troubled Asset Relief Program (TARP) summary says the total commitment of government is $16.8 trillion dollars on top of the $4.6 trillion that the taxpayers have already paid out. The fact that the mere mentioning of these numbers make one's head spin speaks directly to how ludicrous the idea of bailing out yet another entity is.

Many in government like to evoke Reagan as of late. Perhaps it would be good to remember what the late president said about government intervention, "The nine most terrifying words in the English language are: 'I’m from the government and I'm here to help.'" Well, it would seem that his words of wisdom are reduced to sound bites, with Democrats in Congress calling for the federal government to bailout the small island commonwealth. Earlier this week it would seem as though revisions of a bill dubbed "Super Chapter 9," have enjoyed bipartisan support, with finalities wrapping up as early as next week.

What could the long term implications of such a bill have on the function of the federal government in the long run? Many economists look at the horizon of our own economy, and it does not look good. It is of the general consensus that things will get much worse before it gets better. What happens when financially troubled states like Illinois and others seek similar help?

Puerto Rico should be allowed to fail. Democrats in Congress point to this collapse as having humanitarian repercussions. That may be true. However, this collapse was due to government overspending, as a result of largely socialist governing system. The people took advantage of an overdeveloped welfare state. With such a small population that is shrinking due to mass emigration to the United States and the Dominican Republic, Puerto Rico could course correct in time, without the need for US intervention.

Some might read this commentary and make inferences as to where my own point of view is from. Often many conservative commentators have absolutely no tie to their subject matter, far from any accountability and largely disconnected from that which they are commenting on. Here, that is not the case. Readers may note that I am Puerto Rican, as a point of fact my wife and I just returned from the island not too long ago. Much like Mexican Americans who stand against illegal immigration, I myself believe that the free market needs to be allowed to work in this case.

When the Soviet Union collapsed in the 90s it was proof that communism and its little brother socialism are unsustainable - a fact that America also could take note of before following people like Bernie Sanders down that road to financial ruin.