Jennifer Van Laar
|
Posted: May 27, 2017 7:40 PM
Share   Tweet
The opinions expressed by columnists are their own and do not necessarily represent the views of Townhall.com. 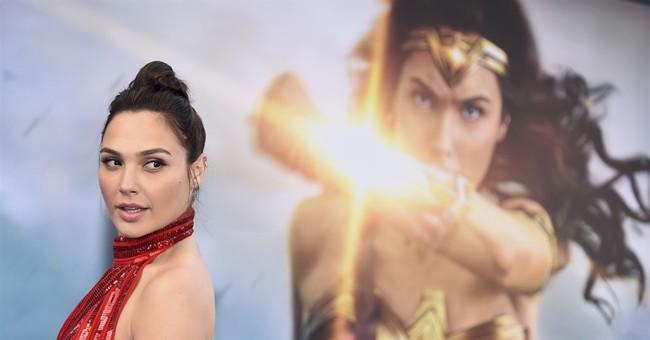 Alamo Drafthouse announced this week that their Austin, TX and NYC locations are planning a “women only” screenings of the new Wonder Woman movie and donating a portion of the ticket price to Planned Parenthood - and they quickly sold out.

We're proud to be hosting #WonderWoman screenings for women ONLY (incl our staff) w/ all proceeds going to @PPFA! ??: https://t.co/ILueTsJH6R pic.twitter.com/LmmgAnmBcg

The movie chain has been vocal in their support of gender neutral bathrooms and laws requiring them, and some in the LGBT community felt excluded by this event. So AD clarified:

@PPFA Want to clarify these WONDER WOMAN screenings include any of our guests who identify as women as well.

Now the men were incensed, and let it be known.

@brianscully @drafthouse Hi, I am also a male and I wholeheartedly disagree with any and all discrimination and segregation.

@LainieEscovedo @drafthouse That would be illegal in California, where there are laws against gender discrimination in public accommodations.

@drafthouse Er, isn't this kinda inherently sexist? Not to mention the fact that the legality is questionable given the Civil Rights Act...

Uh-oh. In their quest to be politically correct, Alamo Drafthouse stepped into one of the unintended consequences of the “you can’t discriminate against anyone, anywhere, ever” movement.

Since you all have appropriated the word “discrimination,” diluted the meaning, and talked about it incessantly for a couple of decades, you can’t be surprised when people use it against you.

In the business sense, I don't see a problem with what Alamo Drafthouse is doing. If, as part of their marketing plan (and don’t kid yourself - that’s exactly what this is) they want to have this special women-only screening and donate money to Planned Parenthood as part of it, so what? It’s their company. I wouldn't take part, because I have no desire to sit with a bunch of rabid man-haters and have part of my money donated to an organization that might abort the next Wonder Woman, but it doesn't bother me if they want to host such an event.

But when journalist Stephen Miller bought a ticket to the NYC screening and tweeted about it, suddenly the mood changed - now men think the women-only screening thing is A-OK.

@redsteeze You probably have every legal right to attend, but it's a shame you can't just let this screening play out as intended.

I imagine @redsteeze thinks he's a 21st century Rosa Parks with his #WonderWoman battle with @AlamoNYC. News flash: he's not.

@redsteeze You'll be denied entry. If you get in, you'll be kicked out. If you order food, it won't be served.

No men means NO. MEN. #gocryaboutit

Miller stated in a reply that it's "against state law to evict me because of my gender," so he should safely be able to sit in the seat he purchased on Alamo Drafthouse's website and "Enjoy the show."

The major problem for Alamo Drafthouse is that they cannot prohibit people from purchasing a ticket based on their gender, race, color, religion, or national origin, according to the Civil Rights Act of 1964.

Another problem for Alamo Drafthouse and their gender-role-averse fans is that their philosophy isn’t logical. They say gender is a social construct. They say biology has nothing to do with gender identification. They say that one can be gender neutral, genderfluid, transgender, or any mutation of the above - and that your identification can change over a lifetime.

So, if one is genderfluid, they could have a male body, yet identify with a different gender depending on the situation - which means that literally ANYBODY could attend that screening and say they are identifying as a female for that span of time. And the progressive rules of not questioning another’s reality would, theoretically, forbid them from calling that person out.

By then, what is the point of a female-only screening?

Going back to the responses to Stephen Miller, imagine that the issue wasn’t him attending a movie screening, but deciding that he wanted to use the ladies’ restroom, and that the people questioning him were conservatives or Christians.

Alamo Drafthouse is standing behind their decision and expanding it.

“That providing an experience where women truly reign supreme has incurred the wrath of trolls only serves to deepen our belief that we’re doing something right.

“As a result, we will be expanding this program across the country and inviting women everywhere to join us as we celebrate this iconic superheroine in our theaters,” the statement added, referring to plans to hold women-only screenings in other states."

Can you imagine if they said that they wanted to provide an experience where men truly reign supreme? Why is one gender more deserving of that treatment, Alamo Drafthouse? And your movie is in June - the month of Father’s Day. Do you not appreciate men?

As my RedState colleague Brad Slager writes, though, in addition to men like Stephen Miller, there is one other group that’s probably not welcome:

Based on recent feminist marches I’m relatively certain that they will not be open to those women who self-identify as “pro-life."

Good on Stephen Miller for volunteering as tribute on this issue. The way to shine a light on the hypocrisy and insanity of today's "tolerance" and "diversity" police is to use their own tools against them - and mock them the entire time.