Thompson Supporters Should Back Giuliani 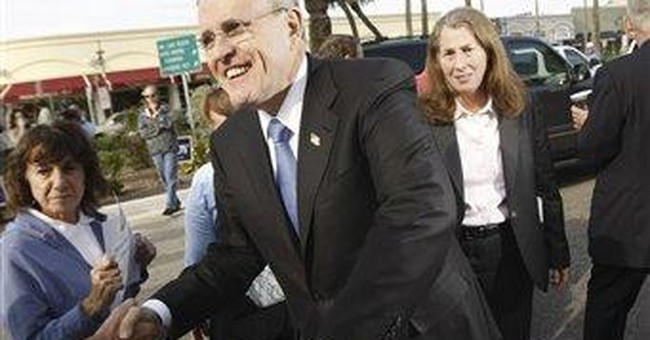 Even with their candidate out of the race, Fred Thompson’s supporters can make a big impact in Florida. They should do so by supporting Rudy Giuliani.

More than any other candidate, Rudy matches Thompson’s conservative credentials in the three most important areas: he offers a conservative economic policy, an explicit promise to nominate only “strict constructionist” judges, and a strong dedication to national security. On the economy, social issues, and defense, a Giuliani presidency will take the nation in a clearly conservative direction—and he can actually beat Hillary Clinton or Barack Obama in November. With a win—or a strong showing—in Florida, Rudy will be positioned to do very well on Super Tuesday a week later, when New York, New Jersey, Connecticut, and California (all strong states for Rudy) all vote. And Thompson supporters can greatly enhance Rudy’s chances in Florida.

It may be surprising to think of Giuliani as the candidate who is closest to Thompson, given their disagreement over abortion. But the Supreme Court long ago took this issue out of representative legislatures’ hands—in a plainly unconstitutional ruling. So a candidate’s position on this issue is now dwarfed in importance by his commitment to appointing judges who will abide by the Constitution and thereby return this issues to legislatures. And Rudy, more than John McCain or Mitt Romney, has firmly committed to appointing law-abiding judges. That is why prudent, pro-life conservatives, like Dennis Prager, have endorsed Rudy.

For all of his noble qualities and his commitment to reform, McCain is a maverick whose breaks from conservatives—on campaign finance, illegal immigration, etc.—are almost always in a left-leaning direction. No Thompson supporter could truly feel confident about the judicial nominees McCain would present to his former Senate colleagues. Romney is less of a maverick than McCain, but he is every bit as unpredictable. Without being unfair, one thing that can surely be said about Romney is this: one can rarely quite pin down what he thinks or what he’ll do. Giuliani, meanwhile, is committed to nominating a particular type of judge—the law-abiding rather than the law-making kind—and Rudy is a man true to his word. If he weren’t, he would have changed his position on abortion before the campaign.

On national security, no one can question Rudy’s credentials. No one can question his proven record of executive leadership in arguably the second-toughest executive position in America—a city whose metropolitan-area population is greater than all but three states (New York included). Rudy took on crime, he took on Democrats, and he transformed a crime-ridden metropolis into the safest large city in America. His record of successful executive leadership is something no other candidate can match. George Will called his tenure in New York “the most successful episode of conservative governance in the past 50 years.”

On the economy, there can be no doubt Rudy is the most conservative candidate. In New York, he consistently cut taxes and balanced budgets. Romney raised taxes 8% during the span of his tenure in Massachusetts,[1] imposed a government-mandated healthcare plan, and received a “C” from the small-government-minded Cato Institute. McCain voted against the recent Bush tax cuts, and he seems to have a limited commitment to limited government. Mike Huckabee increased taxes 19% during the span of his tenure in Arkansas, increased spending 65%—more than Bill Clinton did—and received an “F” from Cato.[2]

On the other hand, Rudy’s tax cut would be the largest in American history. His Fair and Simple Tax (FAST) form—similar to Thompson’s proposal—would allow Americans to complete their taxes on one page. He would cut corporate taxes from 35% to 25%, capital gains from 15% to 10%, and allow tax-free private savings accounts for general savings, retirement, education, and access to affordable, portable, private healthcare.

Rudy was recently praised by the Wall Street Journal, which asserted that he and Thompson have proposed the best tax plans and are the best “at explaining how taxes affect the economy.”[3] Steve Forbes writes that, “With Fred Thompson now having dropped out…there can no longer be any question which candidate is offering the best tax plan.”[4] Americans for Tax Reform president Grover Nordquist calls Rudy’s plan “a monumental leap forward for the American taxpayer and the U.S. economy,” and the Club for Growth calls it “a bold and innovative proposal that will…promote economic growth for Americans across the economic spectrum.”[5]

There’s a reason the New York Times, the nation’s liberal paper of record, just eschewed Giuliani and endorsed McCain. The Times could instead have endorsed Romney, but the Times, like everyone else, presumably can’t really tell where Romney stands. So they decided to go with the candidate who sometimes breaks with conservatives, rather than the one who consistently avoids taking positions. (If a candidate is to be characterized by slipperiness, the Times prefers that the candidate be named Clinton.) Thompson’s supporters should migrate to the man the Times wants nothing to do with, the man who ran New York as a conservative, is true to his word, and will clearly lead America in a conservative direction on social, defense, and economic issues: Rudy Giuliani.