The Republican President Who Alienated Republicans

Jeff Jacoby
|
Posted: Feb 18, 2019 12:01 AM
Share   Tweet
The opinions expressed by columnists are their own and do not necessarily represent the views of Townhall.com. 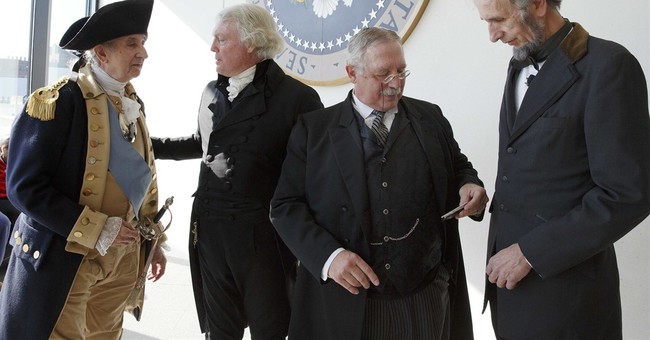 APART FROM history buffs and aficionados of presidential beards, few Americans today have ever heard of Benjamin Harrison. Yet on this Presidents Day weekend, there is a lesson to be learned from the experience of our obscure 23rd president.

When he entered the White House in 1889, it was with a pedigree unmatched in American presidential history.

He was the son of John Scott Harrison, an Ohio farmer and two-term member of Congress. He was the grandson of William Henry Harrison, a war hero who was elected the ninth president of the United States. He was the great-grandson of Benjamin Harrison V, a Founding Father who served in the Continental Congress, signed the Declaration of Independence, and was both a Virginia governor and speaker of the elected House of Delegates. And he was the great-great-great-grandson of Benjamin Harrison III, a gifted 17th-century Virginia politician, who became the colony's attorney general when he was just 24, then went on to become speaker of the House of Burgesses and Virginia's treasurer before his untimely death at 36.

But while politics was in the family line, Harrison was anything but a normal politician.

On paper, he fit the part. As a fledgling lawyer in Indianapolis, where he and his wife moved after getting married, he made a name for himself as a gifted speaker and rose steadily in Republican Party circles. He won election to the post of Indiana Supreme Court reporter, narrowly lost a race for governor, and in 1880 was named to the US Senate. Yet his demeanor with political people was nearly always chilly and standoffish. He was described as a "refrigerator" by the GOP's national chairman, and as "the human iceberg" by the most powerful Republican in Congress, House Speaker Thomas Reed. The very opposite of a glad-handing back-slapper, Harrison didn't like to shake hands (and always wore gloves when doing so). But he had a knack for addressing crowds that kept him in great demand as a Republican Party campaigner.

For Republican strategists seeking a candidate to challenge Democratic President Grover Cleveland in the 1888 election, however, Harrison had assets that outweighed his stiffness and lack of bonhomie. Above all, he was the acknowledged leader of the Republicans in Indiana and had guided the state party to notable success in the 1886 midterms. Indiana was then one of the two most crucial "doubtful" states — or as we would say today, swing states — in presidential politics. The other was President Cleveland's home state of New York, where Democrats appeared to be running strong.

At the Republican convention in 1888, seven candidates contended for the nomination. Harrison wasn't the favorite, but he was everyone's second choice and gradually gained strength through seven roll calls as the front-runners faded. On the eighth ballot, Harrison captured the nomination. In the campaign that followed he played to his strengths, giving speech after speech to delegations that traveled Indianapolis to see him. On Election Day, Cleveland won the national popular vote by 90,000 — but Harrison narrowly carried Indiana and New York, thereby clinching a majority in the Electoral College to become the 23rd president of the United States.

From the perspective of a 21st-century American, the election of 1888 and the Harrison administration that followed are a reminder of an inconvenient truth about political parties: They exist to fight and win elections, not to uphold permanent principles.

In recent years, traditional GOP conservatives have been discombobulated by the changes that Donald Trump has wrought in the Party of Reagan; centrist Democrats in Bill Clinton's mold have felt similarly displaced from the mainstream of their party.

That is nothing, though, to the way the parties have shifted since Harrison's time.

The GOP of 1888 was the party of unabashed protectionism, higher tariffs, increased spending, and expanded entitlements (in the form of lavish pensions for Civil War veterans). Cleveland and the Democrats, by contrast, embraced the cause of government restraint; they urged a reduction in tariffs to ease consumer prices, and argued that the government surplus should not be spent by Washington but returned to the private economy.

The Republicans of the 1880s were also the party of black civil rights.

Repeatedly and eloquently, Harrison appealed for strong federal action to combat the disenfranchisement of African Americans in the South. "When and under what conditions," he demanded, "is the black man to have a free ballot? When is he in fact to have those full civil rights which have so long been his in law?" Democrats, on the other hand, implacably opposed Harrison's voting-rights measure. They reviled it as a "force bill" that would bring federal bayonets to Southern polling places and allow whites to be "over-ridden and down-trodden" by the blacks they considered inferior. The legislation died in a Senate filibuster, but Harrison's sincerity was never in doubt. His efforts on behalf of voting rights said Frederick Douglass, "should endear him to the colored people as long as he lives."

Unfortunately for Harrison, he had never managed to endear himself to leaders of his own party. Almost from the moment, he was elected, the "human iceberg" began alienating top Republicans, bypassing them for Cabinet posts and ignoring their recommendations on patronage.

"Resentments were famous," political scientist Karen Orren wrote in a 2004 essay. "Speaker Reed lamented he had only two enemies in Maine, and Harrison appointed one of the collectors of customs. Harrison refused [Ohio Senator Marcus] Hanna, who raised unprecedented funds for the 1888 campaign, the patronage of the Cleveland lighthouse." New York's powerful Republican boss, Thomas Platt, "went to his grave claiming Harrison broke a promise to make him secretary of the treasury."

Harrison managed to lose support even when he granted supplications.

"I suppose he treated me about as well ... as he did any other Senator," Senator Shelby Cullom of Illinois later recounted, "but whenever he did anything for me, it was done so ungraciously that the concession tended to anger rather than please."

As the 1892 election approached, more than a few Republicans were fed up with Harrison. Some maneuvered to replace him as party standard-bearer with Secretary of State James Blaine, who had been the GOP nominee in 1884. The insurgency failed — then as now, it was virtually impossible for a sitting president to be denied renomination.

But then as now, even an unsuccessful intraparty challenge could fatally weaken a president seeking a second term. Foreshadowing the fate of later presidents such as Gerald Ford, Jimmy Carter, and George H.W. Bush — all of whom ran for reelection with only lukewarm support from party loyalists — Harrison had no chance of prevailing. The Democratic candidate was again Grover Cleveland, who drew almost as many votes as he had four years earlier. But Harrison did far worse, as hundreds of thousands of Republicans in the West defected to a new third party, the Populists. New York and Indiana switched back to the Democrats. Cleveland won in a rout, and both houses of Congress went Democratic for the first time in decades.

On this Presidents Day, Harrison's experience might be read as a cautionary tale about the limitations of a prominent family brand or an aptitude for stump speaking. In the end, those weren't enough to overcome the dismay and divisions the 23rd president engendered in his own party. Democrats, united in their opposition, reclaimed the White House and sent the president with the troublesome personality back home to Indianapolis.