Clinton Tumbles Down the 'Marriage Gap'

Jeff Jacoby
|
Posted: Mar 19, 2018 11:29 AM
Share   Tweet
The opinions expressed by columnists are their own and do not necessarily represent the views of Townhall.com. 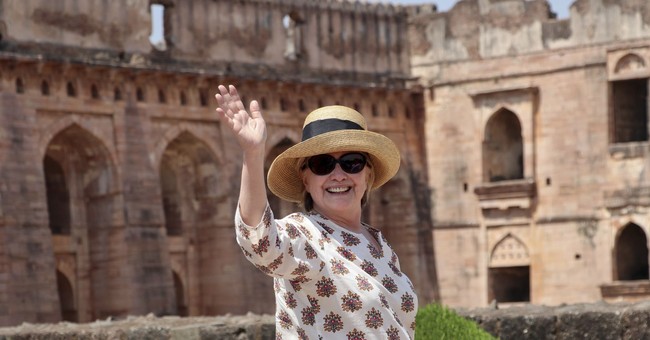 IT HAS BEEN nearly 17 months since Hillary Clinton lost the presidential election, yet she can't seem to stop talking about her defeat, or all the culprits she holds responsible.

She was at it again in India last weekend. Answering a question about the 2016 election, she portrayed Trump supporters as primitives motivated by racism, misogyny, and hatred of immigrants. "Make America Great Again" was a pitch to American bigots, Clinton said — to voters who "didn't like black people getting rights . . . don't like women getting jobs . . . don't want to see that Indian-American succeeding." That was a reprise of her infamous "basket of deplorables" slur, one of the worst self-inflicted wounds of her campaign.

"We [Democrats] do not do well with white men, and we don't do well with married, white women," she said. "And part of that is an identification with the Republican Party, and a sort of ongoing pressure to vote the way that your husband, your boss, your son, whoever, believes you should."

Not surprisingly, that triggered a torrent of ridicule. "Yes, women who voted Republican only did so because they are afraid that ol' Bob is going to come home, get the beatin' stick out of the closet and start a-whoopin' and a-whalin' on the little woman," wrote conservative polemicist Ben Shapiro.

It wasn't the first time Clinton has blamed her loss in part on women caving in to pressure from the men in their lives. Last September, in an interview with NPR, she approvingly cited Facebook executive Sheryl Sandberg's prediction that women would have no empathy for her on Election Day because they would "be under tremendous pressure from fathers and husbands and boyfriends and male employers not to vote for 'the girl.'"

Clinton is a former law partner, US senator, and secretary of state. She was the first woman to be a major-party nominee for president. She is an outspoken feminist who, even as she lost the 2008 Democratic nomination to Barack Obama, boasted of having put "about 18 million cracks" in the "highest, hardest glass ceiling." She acknowledged then that the prospect of a woman becoming president of the United States had become "unremarkable." In last year's election, she received 65,844,954 votes — millions more than her opponent — and the majority of those who voted for her were women.

Yet now she claims she lost the election because women were arm-twisted into backing Trump? Is her feminism really that shallow?

Buried under the condescension and self-pity, however, there were some grains of truth in Clinton's words.

White voters and married voters are more likely to vote Republican, and have been for years. Though disquisitions on the "gender gap" are a perennial feature of presidential campaign coverage, marital status is a far more telling predictor of voter behavior. Single women, by and large, vote Democratic. Married women lean Republican.

Exit polls in 2016 confirmed that this marriage gap was alive and well. While Clinton won 55 percent of unmarried voters, Trump pulled 52 percent of those who were married. Among married women, Clinton actually edged Trump, winning a 49 percent plurality to his 47 percent. A differential in favor of the female candidate obviously can't be explained by "tremendous pressure" from men not to vote for "the girl." What it did reflect was Clinton's massive support from black women, 94 percent of whom voted for her.

But most white women voted Republican in 2016, just as they had in 2012, 2008, and 2004. And since white women are much more likely to be married, that is the demographic in which the marriage gap shows up most vividly.

Clinton's problem with married white women had nothing to do with her sex, and everything to do with her being a liberal Democrat. Wedlock correlates strongly with more conservative political opinions; in Gallup's words, "marital status remains one of the most reliable predictors of party identification." Americans who lean conservative or Republican — those who are older, white, and religious — are more likely to get married. At the same time, marriage and the experiences associated with it — parenthood, home ownership, the economics of supporting a family — have a well-known tendency to nudge adults to the right.

It will hardly come as a bolt from the blue that spouses affect each other's thinking and habits. Studies have long shown that women pay less attention to politics than men do. That helps explain why single women are less likely to register and vote — and why, when they marry, women are more likely to embrace their husband's political perspective than the other way around. That doesn't reflect patriarchal misogyny; it reflects the fact that bonds of love and marriage lead people to unite in other ways too.

In 1992, when Bill Clinton was running for president, he went on "60 Minutes" to answer allegations of extramarital wrongdoing. His wife appeared with him and backed him up. "I'm not sitting here some little woman standing by my man like Tammy Wynette," Hillary Clinton said that day. "I'm sitting here because I love him and I respect him." She resented the insinuation that she lacked the agency to make a political decision in her own best interest. Women who voted for Trump resent it when Clinton makes the same insinuation about them.