Shock and Awe Over Agrabah 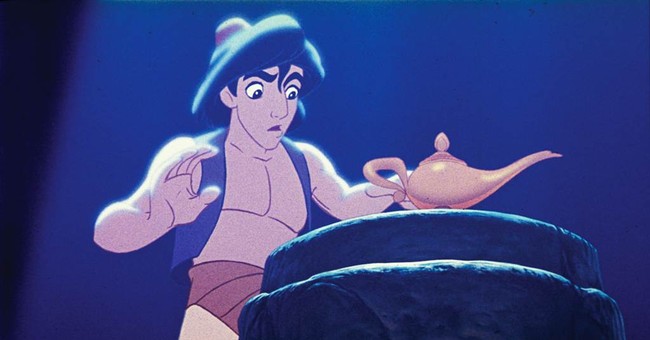 Americans hardly need another polarizing issue to argue about. But according to a new poll, voters are increasingly at odds over US policy toward Agrabah.

In a survey released Friday, Public Policy Polling asked a national sample of voters: "Would you support or oppose bombing Agrabah?"

The results were revealing. Thirty percent of the Republican respondents supported a bombing campaign, while 13 percent were opposed. Among Democrats, 19 percent were in favor of bombing, compared with 36 percent who were against.

To be sure, Agrabah, a city of mystery and enchantment, is not likely to be attacked any time soon: It's the fictional metropolis in the 1992 Disney film "Aladdin." Even Ted Cruz, who proposes to "carpet bomb" ISIS strongholds in Syria, hasn't called for deploying the US bomber fleet against magic carpets. And it's doubtful that Pentagon planners have war-gamed taking out a target with an all-powerful genie on its side.

Well, even serious pollsters are entitled to amuse themselves every now and then. It is kind of funny to think that a large swath of the electorate, if asked, will express an opinion on whether to launch a military strike against an imaginary enemy.

Then again, "funny" may not be the right word.

Militarily and economically, the United States is the most powerful nation on earth. As a democratic republic, its leadership and policies are shaped by the electorate's attitudes and impressions, which makes US public opinion one the most consequential levers in world affairs. If American voters can be so easily bamboozled into taking sides on a joke proposition like "bombing Agrabah," just how far-fetched is it to assume they could be bamboozled into taking a stand on anything?

The Agrabah prank is the latest in a long line of seemingly serious poll questions highlighting the public's lack of knowledge.

An Oklahoma State University survey in January, for example, found that approximately 80 percent of Americans supported mandatory labeling of "foods containing DNA." (All food contains DNA). In another example, a YouGov poll conducted for the Huffington Post asked whether the 1975 Public Affairs Act should be repealed. When respondents were informed that President Obama favors repeal, Republicans were 13 times more likely than Democrats to insist the law should be preserved. By contrast, when told that the push to scrap the law was coming from GOP leaders in Congress, 28 percent of Democratic respondents — but just 4 percent of Republicans — said they opposed repeal.

There is no end to what the public doesn't know about public policy, current events, andAmerican history. Ilya Somin, a scholar at George Mason University, opens his 2013 book, Democracy and Political Ignorance, with a slew of devastating illustrations. At the height of the Cold War, he notes, only a minority of Americans knew that the Soviet Union wasn't a member of NATO. Six years into the post-9/11 war on terror, just one-third of the public could identify "Sunni" as one of Islam's two main branches. Agrabah an anomaly? Hardly.

H. L. Mencken, writing in 1916, lampooned democracy as "the theory that the common people know what they want, and deserve to get it good and hard." If political ignorance was distressing a century ago, it is vastly more alarming today. Government at all levels has grown inconceivably complex and overbearing; so enormous is the modern state that even the most well-informed citizen cannot help but be ignorant of most of its activities. The bigger the government, the more we don't know — and the more dangerous our predicament. That's a problem that can't be solved by bombing Agrabah. When will we wake up and smell the hummus?