When the General Assembly Votes, the US Should Abstain 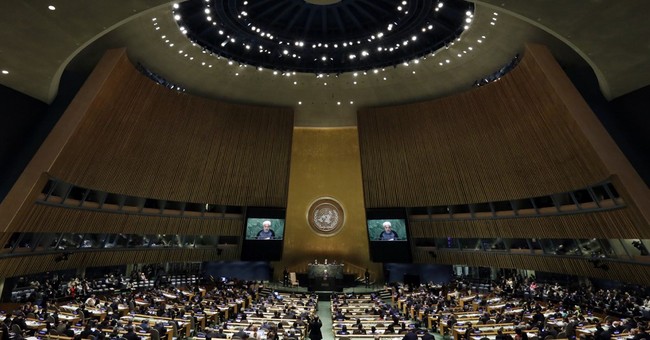 EACH YEAR, the United Nations General Assembly passes a resolution condemning the US economic embargo on Cuba. Each year, the United States, joined by a dwindling number of friends, votes against the resolution. Passage is a foregone conclusion. The vote last year was 188-2.

The United Nations was born 70 years ago this autumn. Its idealistic Charter called for the promotion of peace and the protection of human rights and dignity.

The resolution has no legal effect. It is merely a vehicle for inveighing against Washington, and for pretending that communist Cuba's long record of economic failure and human-rights abuse is somehow the fault of the United States.

For 23 years, under Republican and Democratic presidents, the United States has opposed the anti-embargo measure. But now comes word that the Obama administration may abstain from this year's vote, an unprecedented step. "It is unheard-of for a UN member state not to oppose resolutions critical of its own laws," the Associated Press reported on Monday, and some congressional leaders are aghast that President Obama would consider shirking his sovereign obligation to defend US interests before the world body. Even if he favors repealing the Cuban embargo (which President Bill Clinton signed in 1996), it remains the law of the land. Until that changes, says House Speaker John Boehner, the president has a "responsibility to defend US law and that's what [he] should do."

An abstention on the UN vote would be in keeping with this administration's practice of flouting, ignoring, or refusing to defend provisions of law it finds inconvenient, in matters ranging from immigration to health insurance to recess appointments to marriage. It isn't only Republicans or conservatives — or lawmakers — who have objected to Obama's presidential overreach. You can agree with the president's position that a statute ought to be repealed or amended, while still expecting him to "take Care that the Laws be faithfully executed," as the Constitution requires.

The suggestion isn't original. It was proposed in the 1960s by the political theorist James Burnham, who died in 1987. To vote on General Assembly resolutions, he argued, is to lend them an authority which serious countries like the United States know they aren't entitled. If that was true in Burnham's day, it is even truer now, when the General Assembly is dominated by corrupt, authoritarian, or tyrannical governments that are hostile to democratic liberties and contemptuous of human dignity. We should not indulge the pretense that there is moral significance to any proposition merely because a majority of the UN's membership endorses it.

The United Nations was born 70 years ago this October with the ratification of a Charter committing member-states to "save succeeding generations from the scourge of war" and "reaffirm faith in fundamental human rights." To be sure, those ideals were always aspirational. But what remains of them? Look at UN today and what do you see? The world's cruelest dictatorships seated on the Human Rights Council. A monomaniacal hostility toward Israel. Global financial and sexual scandals. Thundering applause for speeches by tyrants and terorrists. The General Assembly has become a moral wasteland and a monument to hypocrisy.

If the United States cannot simply walk away from the UN, we can at least decline to solemnize the farce by voting on General Assembly resolutions. The Security Council is different: Its resolutions can have legal force and we have veto power. But in the General Assembly, where cynicism and sanctimony reign, we gain nothing by voting. Certainly America's views should be explained and defended, with eloquence and force. But when the question is called, the United States should abstain. On every issue, every time.