American to the Core 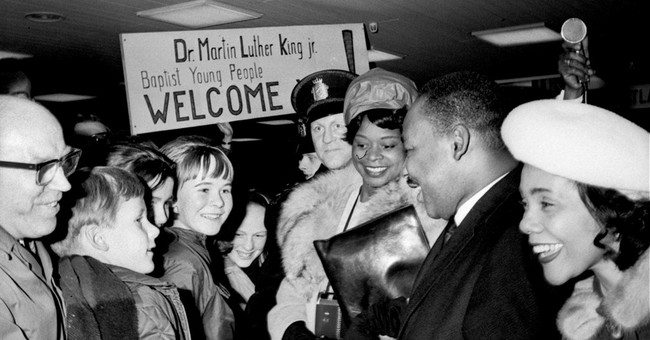 THE FINAL words of his final speech, delivered from the pulpit of the Mason Temple Church of God in Memphis on April 3, 1968, eerily foreshadowed the next day's catastrophe.

"Like anybody, I would like to live a long life," the Rev. Martin Luther King told his listeners, who had braved a thunderstorm to be there. "Longevity has its place. But I'm not concerned about that now. I just want to do God's will. And He's allowed me to go up to the mountain…. I've seen the Promised Land. I may not get there with you. But I want you to know tonight, that we, as a people, will get to the Promised Land!"

Thoughts of his mortality were understandably on King's mind. The plane he flew to Memphis had been delayed by a bomb threat. For years he had been the target of anonymous assassination warnings. At a Harlem book signing a decade earlier, he had narrowly survived a knife attack. A woman had stabbed him deep in the chest, and as King recounted to his Memphis audience, the papers reported that had he sneezed before doctors could remove the blade, he would have died. As he was recuperating, letters poured in from around the world — including one from a ninth-grade student that King quoted from memory.

"While it should not matter, I would like to mention that I'm a white girl," she had written. "I read in the paper of your misfortune and … that if you had sneezed, you would have died. And I'm simply writing you to say that I'm so happy that you didn't sneeze."

Taking that white girl's kind words from 1958 as his theme, King launched into a brilliant peroration.

"I want to say tonight that I too am happy that I didn't sneeze," he declared. "Because if I had sneezed I wouldn't have been around here in 1960, when students all over the South started sitting in at lunch counters." He proceeded to enumerate, step by step, the civil rights victories of the previous 10 years, each of which he would have missed "if I had sneezed." Eight times he repeated that phrase — "if I had sneezed." It is a mark of King's oratorical genius that he could employ so homely a term with such riveting effect.

To read (or listen to) King's final speech, knowing that he was just 39 and would be murdered the next day, is to marvel that America could have produced so extraordinary a liberator. He could and did evoke the shame of his nation's grievous racial injustices with devastating force — yet he never broke faith with that nation, or doubted that if its conscience were aroused it would eventually take seriously its creed of liberty and justice for all.

"All we say to America is: Be true to what you said on paper," King told his Memphis audience that day. "If I lived in China or Russia or any totalitarian country, maybe I could understand … the denial of certain basic First Amendment privileges, because they hadn't committed themselves to that over there." But America had committed itself to uphold freedom of speech and assembly and conscience. "The greatness of America is the right to protest for right." Far from writing off that commitment as a dead letter, King never stopped insisting that it be lived up to.

Then as now, there were some black Americans — W.E.B. Du Bois, Malcolm X, Stokley Carmichael — who decided that the American idea was a galling lie. Not King. A Jeremiah Wright might preach "God damn America," or gloat after 9/11 that "America's chickens are coming home to roost." Not King.

Whether writing behind bars from a Birmingham jail, or preaching to 250,000 civil rights marchers at the Lincoln Memorial, or accepting the Nobel peace prize in the presence of Norway's royal family, King always located his true north within the American tradition. On the last full day of his life, in the last speech he ever gave, this great American reiterated that those who struggled for black civil rights "were really standing up for the best in the American dream, and taking the whole nation back to those great wells of democracy which were dug deep by the Founding Fathers."

He was American to his core, not only staking a claim to the American dream, but enriching and expanding it for everyone. With hope and love, with dignity and truth, he said in Memphis, "we, as a people, will get to the Promised Land."

We, as a people, did. Would that King could have lived to experience it.