The Wall Came Tumbling Down 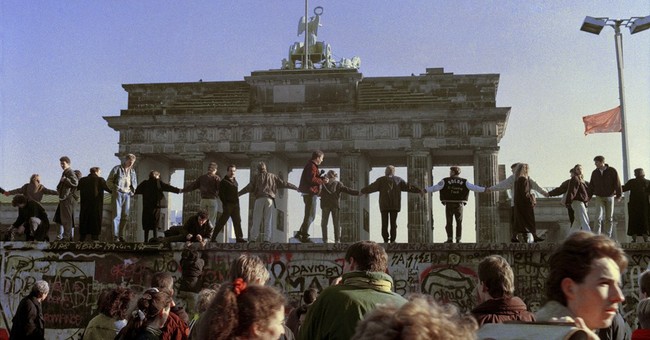 Editors' note: this column is a reprint from Jeff Jacoby in 1999.

They used to tell a joke in West Berlin:

"What are you going to do when the Wall comes down?"

"Find a tree and start climbing."

"Because there won't be any room to stand in the streets."

Like a lot of jokes told on the front lines of the Cold War, that one contained more than a grain of truth. There really wasn't any room to stand — well, not much — when, on that breathtaking night 10 years ago this week, the Central Committee of the East German Communist Party abruptly announced the end of all restrictions on travel to the west. Almost at once, a flood of East Berliners came rushing through the gates. By the hundreds of thousands they came, surging all night long and through the next day, making their way to the free world on foot, by car — even by subway.

Overnight, two new openings were carved out of the heavily reinforced concrete of the Berlin Wall, and the Jannowitz Bridge underground station -- sealed off 28 years earlier when the wall went up — was hastily reopened. They were still painting the fare schedule when the crowds came hurtling down the steps for the ride westward.

In the first 48 hours, more than a million East Germans crossed over. Many were keen to see the Kurfurstendamm, West Berlin's glittering shopping boulevard — a paradise unknown in the drab and shortage-plagued East. Traffic came to a halt all over the city. And not only there. At Helmstedt, on the border between the Germanies, cars were backed up for 40 miles; some drivers waited 11 hours to drive across to the west.

But nothing could top the tableaux at the Wall itself. The huge crowds of weeping, laughing, cheering Berliners, filling every square foot of what had been a grim no-man's-land just a day earlier. The exuberant young men and women clambering to the top of the wall to dance and drink champagne. The welcoming throngs of West Berliners, pounding with glee on the hood and roof of each Trabant that came sputtering through the checkpoints. And everywhere, Germans with chisels and hammers and drills, attacking the wall in joy and in triumph.

Schandmauer, the Germans called it: wall of shame. It had been, literally, a monument to evil — the evil of communism. In the 20th century, no menace ever proved more deadly. Not even Nazism. The Nazis murdered millions, but the communists murdered scores of millions. The Nazis terrorized Europe for seven years; the communist horror lasted for more than 70 years. No single structure could encapsulate all that the communists unleashed in Europe, but the Berlin Wall communicated with perfect clarity communism's political repugnance: It is a system so hateful that no people would willingly live under it.

John F. Kennedy said it best. "Freedom has many difficulties and democracy is not perfect," he acknowledged in his 1963 address in Berlin. "But we have never had to put a wall up to keep our people in."

It was an electrifying speech, but ultimately a hollow one. Kennedy, overly afraid of triggering a war with the Soviet Union, had refused to act when the East Germans first began to wall off the western sectors of Berlin on Aug. 13, 1961. (His response was to send Vice President Lyndon Johnson on a morale-boosting visit to West Berlin.) He had no intention of going beyond rhetoric in 1963, either.

Twenty-four years later, a different president delivered an equally electrifying speech at the Berlin Wall. But this was a president who matched words with action.

He wasn't waiting for Gorbachev to accept the invitation. Reagan had come to office believing that the Cold War could be won by applying economic, military, and political pressure to the Soviet Union. In a landmark document — National Security Decision Directive 75 — he had laid out the strategy by which the Soviet rulers would be forced to their knees.

On every front, he bore down. From rebuilding the US military to arming freedom fighters in Afghanistan and Central America, from funding Poland's Solidarity movement to harshly denouncing the crimes of communism, Reagan fought the Cold War to win. By the time he stood before Berlin's Brandenburg Gate in 1987, the Kremlin was under terrible strain and badly demoralized. When the endgame began in Eastern Europe two years later, Mikhail Gorbachev didn't dare send in the tanks. The Evil Empire was finished.

For a time it was the planet's most visible, most nauseating, emblem of tyranny. Today its shards are sold for souvenirs. The Berlin Wall was massive enough to stop a tank. But, as Reagan foretold, it could not withstand freedom.