The Most Useless Job in the State 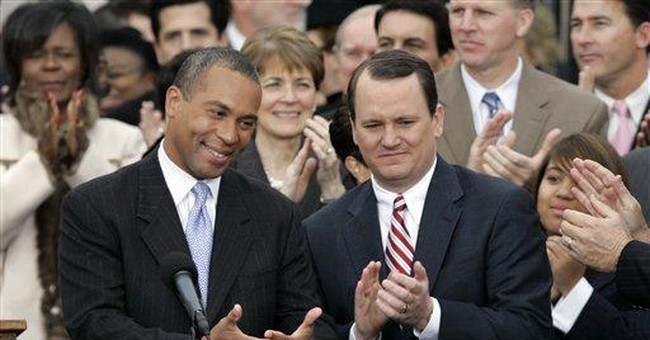 Lieutenant Governor Timothy Murray is quitting his job next week, and I know how deeply worrying this must be to the good people of Massachusetts: How can we hope to survive the next 19 months with a vacancy in the lieutenant governor's office? As Governor Deval Patrick said when Murray announced his resignation on Wednesday: "His departure leaves a very big hole in our team…. This is no small loss."

Call me a crazy optimist, but I'm pretty sure that Patrick – and the rest of us – will come through just fine.

After all, it won't be the first time Massachusetts has stared into this abyss.

In 1969, Governor John Volpe resigned in mid-term to become secretary of transportation in the Nixon administration, and Lieutenant Governor Francis Sargent moved into the corner office. For the next two years Massachusetts was without a lieutenant governor, yet the commonwealth somehow endured.

It endured as well from 1985 to 1987, after John Kerry was elected to the US Senate, leaving a vacant lieutenant governor's post in his wake. Likewise a decade later, when Governor Bill Weld walked away from a job he'd grown bored with, and Lieutenant Governor Paul Cellucci took over as governor. And when a re-elected Cellucci resigned in 2001 to become the US ambassador to Canada, Jane Swift moved up to the top job and the state once again found itself without the services of a lieutenant governor. Believe it or not, Massachusetts muddled through.

Murray's exit makes him the fifth of the last nine lieutenant governors to leave the position unoccupied — and unoccupied it will stay until a new administration takes power in 2015. When it comes to any other statewide office, or to seats in Congress or the state Legislature, vacancies are filled by special election and/or gubernatorial appointment. Yet Massachusetts law makes no such arrangement for replacing a departed lieutenant governor. The framers of the state constitution knew that some political openings need to be filled promptly. They also knew that the lieutenant governorship isn't one of them.

All snark aside, the real puzzle isn't how Massachusetts will get through the next year and a half without a lieutenant governor. It is why we bother to retain the job at all. It is a constitutional position with no useful constitutional function, apart from succeeding a governor who dies or resigns. (The lieutenant governor also attends meetings of the archaic Governor's Council, an anachronistic holdover from colonial days.) He is the governor-in-waiting, with nothing to do while he waits. For doing that nothing, the lieutenant governor is paid a salary of $125,000, and provided with a staff, a State House office, and all the perks of a lofty political title.

Being the state's No. 2 can be a springboard to higher office. But it can also leave a lot of time for getting into trouble, as Murray's rocky tenure has shown. And not only in Massachusetts: A few weeks ago Florida's lieutenant governor Jennifer Carroll abruptly resigned amid a growing scandal involving an Internet gambling company for which she had once been a consultant.

There are a few states, Texas being the most noteworthy, where lieutenant governors are entrusted with serious, high-level responsibilities. Much more common is the Massachusetts-style sinecure, where ambitious politicians have little to do but wait for the state's chief executive to expire or quit.

In California, Lieutenant Governor Gavin Newsom – the former mayor of San Francisco -- has been unusually blunt about the pointlessness of his current job. Asked at one point how often he spent time in the state capital, Newsom replied: "Like one day a week, tops. There's no reason…. It's just so dull…. Sadly, I just – ugh, God."

No state has to have a lieutenant governor.

For the next 19 months, Massachusetts voters will wake up every morning and go to bed every night in a state with no lieutenant governor. Like the proverbial fish with no bicycle, we won't notice that anything is missing, or yearn for it to be restored. The commonwealth's founders knew better than to worry about an absent lieutenant governor. Wouldn't this be a good time to make that absence permanent?