Secure the Border? That's What the US Has Done 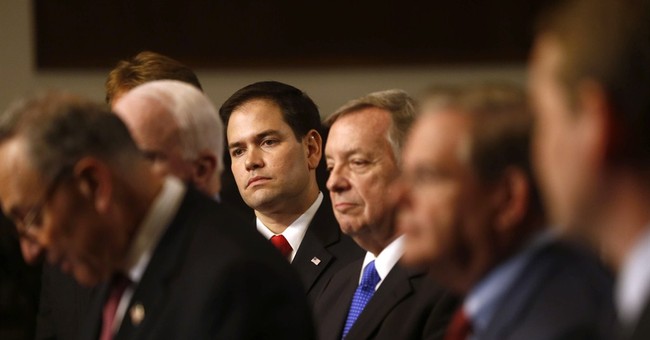 IN THE CLAMOR over immigration, the demand for more border security has been unrelenting.

Immigration restrictionists have dug in their heels, insisting that stronger border controls must come before any other change. The Senate's bipartisan Gang of Eight, bowing to political reality, is proposing an immigration overhaul that creates a path to citizenship for illegal immigrants living in the United States, but makes it contingent on a series of border-focused security "triggers." The bill they introduced last month is styled the "Border Security, Economic Opportunity, and Immigration Modernization Act of 2013" – the order of those terms is not random – yeta majority of Americans doubts the government would actually secure the border if the law is passed. Florida Senator Marco Rubio, one of the bill's sponsors, publicly invited critics to suggest ways the security triggers could be made even tougher.

Immigration hardliners are determined to prevent a repeat of 1986, the year President Ronald Reagan signed a landmark immigration law offering amnesty – it wasn't a fighting word then – to about 2.7 million illegal immigrants. Yet the massive border strengthening called for in the law never materialized, critics say. So they've learned their lesson: border security first.

But suppose that in the years since then we had undertaken a massive effort to secure the Mexican border? What if, instead of largely ignoring the rising pressure to crack down on migrants entering the country illegally, Congress and the president had responded to it to with a will?

There is no need to imagine. They did.

Contrary to popular mythology, the federal government has taken border security so seriously that it now spends more than $18 billion a year on border and immigration enforcement – 15 times what it was spending at the time the 1986 law was enacted. Washington now puts more money into immigration control than intoall other federal criminal law-enforcement agencies – including the FBI, the Drug Enforcement Administration, the Secret Service, the US Marshals Service, and the Bureau of Alcohol, Tobacco, Firearms and Explosives – combined.

The US Border Patrol has been dramatically built up, with the number of agents at the border having doubled over the past decade to more than 21,000. And in addition to "boots on the ground," America's border is now being patrolled with radar stations, surveillance cameras, nearly 700 miles of steel fencing, and even Predator drones.

With our southern border quasi-militarized in this manner, the number of aliens illegally crossing into the United States plummeted. From a high of 1.6 million in 2000, Border Patrol apprehensions are now at one-fifth that level, the lowest rate since the 1970s.

For all the complaints about insufficient enforcement, the feds are now more pitiless about prosecuting immigration violators than ever before – today a majority of all federal criminal prosecutions are immigration-related. And illegal immigrants and criminals have been deported with such growing aggressiveness in recent years, so much so that during President Obama's first term, a record 1.5 million deportations were carried out.

This is not a description of some alternative reality in which border security had been taken more seriously. It's a description of how seriously immigration and border enforcement have been taken in recent decades. From the Predator drones to the record-high deportations to the vast increase inBorder Patrol agents, the last thing Washington can be accused of is ignoring the ferocious public pressure to secure the border.

Though you would never know it from all the hyperventilating and ginned-up outrage, net migration across the southern US border has now fallen to zero – the number of Mexicans entering is now matched (or even exceeded) by the number leaving.

Border security, of course, is a perfectly sensible goal. An impenetrable airtight Berlin Wall of a border is not. Mexico and the United States are democratic friends and indispensable economic partners, deeply linked by ties of family, history, and trade. As Shannon O'Neil of the Council on Foreign Relations notes, the border is legally crossed every day by more than $1 billion worth of goods, 13,000 trucks, 1,000 railroad cars, and 400,000 people. It is mad to imagine that such a busy and important frontier could be sealed so hermetically that no one without legal papers can ever get across. It is even madder to insist that intelligent immigration reform should be held hostage to such an irrational goal.