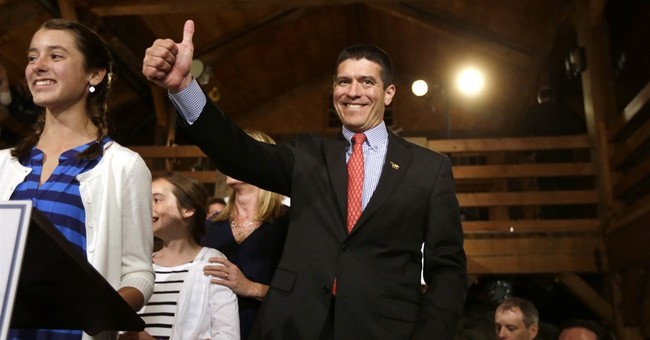 Trending
It's the Holy Grail that Massachusetts Republicans have been seeking for years: the blueprint for getting candidates elected to statewide office. There were those who thought Scott Brown had solved the riddle after his electrifying special-election victory in 2010 — only to see him lose decisively to Elizabeth Warren less than three years later. Now comes another special Senate election, and Republicans have another intriguing standard-bearer. Can Gabriel Gomez crack the code?

Broadly speaking, there are two contending theories of how the GOP can win in deep-blue Massachusetts. One school holds that Republicans do best when they run as reach-across-the-aisle moderates, taking liberal stands on social issues and distancing themselves as much as possible from the national party’s more conservative brand. The other holds that in an environment dominated by liberals, Republicans can succeed only by creating a contrast: Rather than hold themselves out as a paler shade of Democrat, they should focus on the values that made them Republicans in the first place.

Each camp bolsters its case by pointing to political history.

Those who argue that Republicans should downplay party affiliation and run as centrists cite the success of former Governor Bill Weld, who was prochoice, pro-gun control, and a supporter of gay rights, affirmative action, and strict environmental controls. Weld was clearly no conservative, yet he was twice elected governor — the second time, in 1994, by a record-shattering landslide.

Brown’s dramatic upset in the Senate race 16 years later is also held out as evidence that only Republican moderates can win statewide elections. Brown campaigned as an “independent” who wouldn’t be just “another partisan placeholder.”

But the same examples support a contrary interpretation.

Weld’s blowout reelection in 1994 was the culmination of a campaign in which he ran well to the right, spending millions on commercials that hammered home his most conservative positions — his support for tax cuts, welfare reform, law and order, and the death penalty. As for Brown, his triumph in 2010 was buoyed by one conservative issue above all: opposition to Obamacare. Brown vowed to be “the 41st vote” against the Democrats’ — and the late Ted Kennedy’s — top legislative priority. Running for reelection three years later, Brown lacked a comparably galvanizing issue.

This how-can-Republicans-get-elected debate has been going on for decades, with reasonable people and thoughtful arguments on both sides. But one brute fact overshadows everything else: Republicans don’t get elected in Massachusetts. Since 1978, only five GOP candidates have waged successful statewide campaigns. Besides Weld and Brown, the others are former governors Paul Cellucci and Mitt Romney, and former Treasurer Joe Malone. Of the five, only Brown made it to the US Senate (Weld and Malone both tried and failed). And the voters replaced him with a Democrat at the first available opportunity.

Can Gomez find the electoral key that has eluded the Massachusetts GOP for so long? His personal story is unquestionably appealing; he is manifestly smart, skilled, brave, and successful. His biography, as the Globe noted in a profile, “might have been compiled by a team of Republican consultants trying to craft the perfect candidate.” But is that enough?

If the election on June 25 comes down to a matchup of demographics and personal appeal, perhaps Gomez will catch lightning in a bottle and power past Ed Markey. The decorated former Navy SEAL with a Harvard Business School pedigree and the Latino immigrant background vs. the tiresome liberal war horse who’s been in Congress forever and is the sanctimonious epitome of an establishment insider? If that’s how voters see their choice, then Gomez may well be the next senator.

But Gomez isn’t the first Republican with an engaging personality and compelling life story to run for office. And Markey is not the first Democratic political lifer to seek higher office. Yet with the rarest of exceptions the Democrat always wins. Gomez may call himself “a new kind of Republican,” but it will take more than a slogan to overcome the powerful Massachusetts tropism for voting Democratic.

“I’ve been a Republican all my life,” Gomez said during the primary. He has yet to tell voters why — and why they should find that attractive. If he can’t come up with a convincing, optimistic Republican message, he’s not likely to crack the code that has defeated so many other Republicans. He hasn’t got much time to figure it out.