Biden vs Trump: the Effectiveness of Their Press Secretaries

Jeff Davidson
|
Posted: Mar 15, 2021 12:01 AM
Share   Tweet
The opinions expressed by columnists are their own and do not necessarily represent the views of Townhall.com. 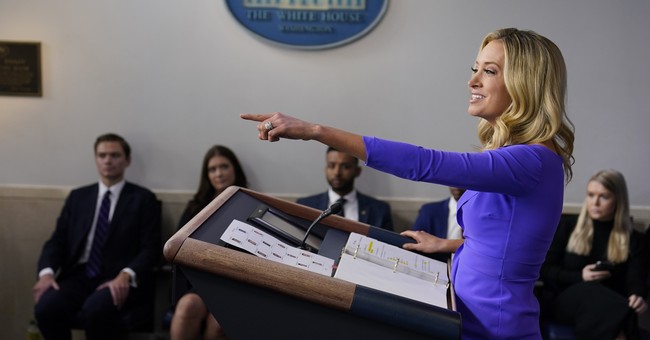 The contrast couldn't be more stark: The difference between Jen Psaki and Kayleigh McEnany reveals a great deal about the respective presidents who hired them. Jen Psaki is unaware of Joe Biden’s positions on a large number of issues, but then so is he. She often answers reporters by saying that she'll have to ‘circle back’ to that. By now, she must be quite dizzy.

In contrast, Kayleigh McEnany upheld the position with aplomb. She appeared at each press conference with high energy. She walked with purpose, stepped on the podium, opened her notebook, and was ready for action.

Besides making dubious flat-footed statements, Jen seems to have a weak grasp on a wide variety of topics. She is often confused and she tries to BS her way out of reporters’ concerns that she does not understand or for which she has no cogent answer.

Jen, to be kind, is disorganized. A photograph of the notebook she uses on the lectern when addressing reporters, versus that of Kayleigh McEnany tells all. Jen's notebook is a near disaster with handwritten notes and post-it pads all over the place. Kayleigh’s was in perfect order, updated with file tabs facing out, typed, alphabetical by key topic area, and a highly viable tool.

One quickly loses faith in Jen’s ability to represent the Biden administration, to pre-assemble information that reporters logically would ask about, and even to offer useful nuggets on the spot which would temporarily satisfy her questioners.

Kayleigh, leagues ahead, would smile at the reporters and deliver several minutes of edited information directly from President Trump and his administration, without a preamble – knowing that most reporters in attendance did not wish to cover her initial topic.

She also was well aware that the reporters represented organizations having a predetermined agenda to diminish the Trump Presidency, in one way or another. Yet, she maintained an upbeat and positive level of communications with everyone.

After Kayleigh presented her opening topic, she took questions from the floor. She stood ready to be of service knowing that she’d encounter round after round of negatively posed questions designed to either catch her off guard, create controversy, or otherwise create an atmosphere of rancor.

Kayleigh offered illuminating press conferences that imparted real news about  what President Trump was doing. She would frequently and proudly say, “this president will always stand for” the U.S. military, the police, wage earners, etc.

Her aforementioned notebook, in a three-ring binder, tabbed with several dozen categories such as the COVID virus, the national budget, or school reopening, included new categories based on new developments within the Administration, across the country, and around the world. When Kayleigh received a question that she could not answer off-the-cuff, with lightning speed, she turned to the tab in her notebook with the essential facts and figures, and, without missing a beat, delivered authoritative information to the questioner.

Kayleigh listened intently to the questions posed and strived to give everyone a chance to pose a question. If someone was grandstanding, or droning on and on, she sought to offer an answer, end the encounter, and turn to the next party. She was quick and to the point, but not terse or demeaning. Most amazingly, she would maintain her composure even after a series of heated questions in a row.

She was not hesitant about accenting key developments that the press ignored. If she didn’t have the answer to a question but could direct the questioner to a better source, she did so. When speculative questions were asked, she politely said, “I'm not going to speculate on that," or, "I don't want to get ahead of the President."

The pacing of her conferences was impressive, with most ranging from 23 to 30 minutes. Reporters eventually became ‘trained’ by Kayleigh to ask their questions succinctly and allow for others to pose questions.

At the close of sessions, Kayleigh offered prepared, parting words, smiled at the group, closed her notebook, and immediately left. In the early days of her tenure, reporters would shout out more questions but soon learned that the attempt was futile.

Not surprisingly, Joe Biden apparently would need at least 47 more years in Washington to be as accomplished in actually serving America, as Donald Trump was in four years.