Jeff Davidson
|
Posted: Sep 10, 2020 12:01 AM
Share   Tweet
The opinions expressed by columnists are their own and do not necessarily represent the views of Townhall.com. 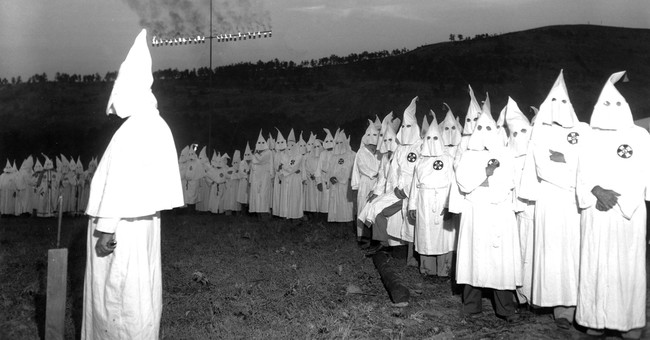 The KKK flourished in America from its inception in 1865, through its resurgence in the 1920s. In 2017, according to U.S. News and World Report, 42 Klan groups have been active in 22 states, representing a slight increase from Obama's last year in office.

Thriving particularly throughout the Democrat-dominated southeastern U.S., over many decades the KKK was responsible for untold lynchings, home burnings, and violence against innocent black Americans. What’s more, they terrorized all blacks, psychologically, keeping them from feeling safe, secure, or even respected in the U.S.

Today, the mainstream media, as typified by The Washington Post, The New York Times, other newspapers around the country, along with broadcast and cable media such as CBS, NBC, NBC, CNN, MSNBC, plus groups such as NPR, have picked up the mantle of where the KKK left off. If that sounds like hyperbole, stay with me.

Instead of employing white hoods and robes, and burning crosses, the mainstream media uses other devices to scare blacks, namely, demonizing the police, demonizing Caucasians, and demonizing American culture in general. The assault is non-stop and has dramatic consequences.

Today's mainstream media elevates any rare incident in which an unarmed black person is killed by police to the hilt. Contrast this with the number of police encounters with the public. Radio host Larry Elder points out that about 50 million police-civilian interactions occur annually with nearly 11 million people being arrested.

Of late, approximately 60,000 police have been assaulted per year, leading to an annual average of 1,000 people killed by the police. Virtually all such suspects violently resisted police and/or brandished a weapon. Of those killed, approximately 250 were black and 500 white. Overall, police shootings involving a white cop and an unarmed black suspect represent less than 4 percent of the total.

Little known is that police officers are 18.5 times more likely to be killed by black suspects than vice versa, based on research from the Manhattan Institute.

Meanwhile, the mainstream media works overtime to ensure that the true nature of policing and, for that matter, violence in America is never depicted accurately. Their skewed attention to a handful of celebrated encounters played out over weeks and sometimes months systematically drums fear into the African American community, as well as those who are sympathetic to it.

As in the incident with Jacob Blake, in Kenosha WI, when a suspect turns his back on the police, he is inviting the greatest of harm. No police officer can see through a suspect, who might be reaching for a weapon. So a split-second decision needs to be made: 1) Trust that the already resistant suspect will turn around and neither injure or kill me, or 2) Save my own life by firing my pistol.

Based on the Bureau of Justice Statistics for 2018, black-on-white violent crime overall – murders and violent attacks – totaled 547,948, whereas similar white-on-black crime was 112,365. Adjusting for overall representation in the population, since there are six times as many whites as black's, means that black-on-white violence is 30 times more prevalent than white-on-black violence. Not three times, not 10, and not 20 – 30 times more likely.

The mainstream media has no interest in you finding out the truth and goes to great lengths to ensure that blacks stay both scared of police and angry at them, and be resentful of whatever whites have done, whether it was 200 years ago or last Friday. The mainstream media knows that conjuring up fear will keep more blacks voting Democrat, even though Democrats have done virtually nothing for blacks in 50 years.

Because many of those on the Left live in a media bubble and are rarely exposed to any other views, they swallow the mainstream media's massive ongoing, fear-mongering campaign, hook, line, and sinker. If you're a black person in America, you might have little chance of knowing that, all other things considered, you're likely safer here than nearly anyplace else on earth. This is particularly true even considering the highly disproportionate involvement blacks have with law enforcement.

Indeed, too many people in America have little or no chance of being exposed to the actual statistics and current reality because the mainstream media's pervasive, ongoing propaganda campaign is so effective. Today, the mainstream media has ably picked up the slack for the KKK.

The larger society did indeed persecute blacks for many years and the mainstream media is fully vested in exploiting historical white guilt to the max. More so than the KKK was ever able to muster, the psychological, if low level, terror that today’s mainstream media constantly and intentionally foments among our black citizens understandably can keep them from feeling safe, secure, and a part of the U.S. mainstream.