Jeff Crouere
|
Posted: May 31, 2021 12:01 AM
Share   Tweet
The opinions expressed by columnists are their own and do not necessarily represent the views of Townhall.com. 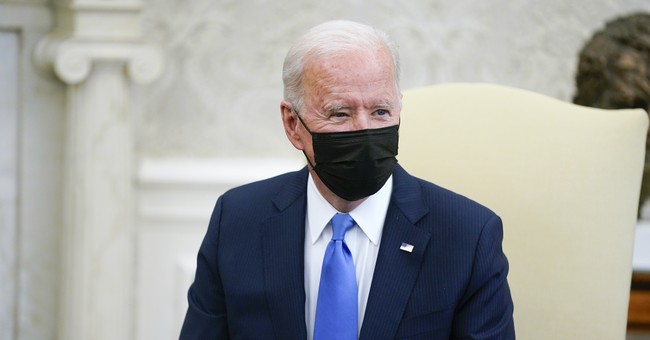 The 78-year-old President of the United States, Joe Biden, is not well. He is suffering from an obvious mental decline. Americans are not sure of his exact condition because he has not released any mental competency test results. When he was asked about it during the presidential campaign, he responded in anger and accused the news reporter who posed the question of being a “junkie.”

Clearly, Biden does not exhibit the same mental acuity that he did as a United States Senator. Comparing videos of Senator Biden versus President Biden shows he is a shadow of his former self.

The younger Biden was much sharper and able to engage in wide-ranging, rapid-fire conversations. Today, President Biden often stumbles through his speeches, having to repeat passages that he could not communicate correctly. Even more troubling, he frequently forgets what he is doing or where he is going, showing a much more severe decline than the normal aging process.

Obviously, it is one of the reasons that he only held one formal news conference in his first 130 days in office. All Republicans in Congress should be demanding that Biden submit to a mental competency test. If he still refuses, there should be loud calls for the 25thAmendment to be utilized and for his removal from office. A mentally incompetent individual should not be entrusted with the most important and demanding position in the free world.

While his mental ability has changed over the years, he has retained glaring character flaws that he exhibited throughout his career. As a Senator and failed presidential candidate, Biden was often labeled a plagiarist. In multiple speeches, he quoted passages from Robert F. Kennedy and British politician Neil Kinnock among others without attribution. It was one of the many reasons his previous presidential campaigns failed so miserably.

As President, Biden is still plagiarizing. At a recent U.S. Coast Guard Academy graduation ceremony, Biden plagiarized by trying to tell an old Ronald Reagan joke. When Reagan said it, it was met with uproarious laughter and applause.  When Biden tried to say it, the response was so muted that he blasted the crowd as “dull.”

Another aspect of Biden’s character that has remained the same is his propensity to lie. It was on display May 18 in Dearborn, Michigan when he claimed that his “great-grand pop” was a coal miner. In fact, even theWashington Posthad to admit that it was a falsehood as his ancestors were not miners, but one worked as an engineer and another one as an inspector.

Another disturbing aspect of Biden’s persona that has not changed is his unseemly behavior toward women and young children. In 2014, author Ron Kessler claimed in his book,The First Family Detail, that Biden enjoyed swimming nude in front of female Secret Service agents. Understandably, Kessler wrote that the agents found his behavior “offensive.”

In 2019, he was almost forced to end his presidential campaign as women came forward complaining about his strange behavior such as smelling hair, massaging, neck rubs, inappropriate touching, kissing, and hugging.

At that time, former Nevada lawmaker Lucy Flores emerged to accuse Biden of smelling her hair and engaging in other unacceptable conduct during a 2014 political event. Other women made similar accusations about Biden. All these accusations were alarming, but the most serious charges were made by a former U.S. Senate office aide, Tara Reade, who alleged that Biden sexually assaulted her. Reade’s bombshell accusations were practically ignored by the media and Biden denied the charges.

At that time, plenty of creepy online videos emerged of Biden manhandling young children. In these videos, Biden was shown grabbing young children who were attending the induction ceremonies of incoming members of Congress or the Obama administration.

These images would have derailed the presidential aspirations of any Republican candidate, but Biden persevered after pledging to improve his behavior. At the time, Biden asserted that he would “be more mindful and respectful of people's personal space.”

While his physical contact with young children may have lessened, he still is making cringe worthy comments. On Friday, during a speech at Joint Base Langley-Eustis in Hampton, Virginia, Biden made appalling remarks about the young daughter of Major Nathaniel Bean, who is currently serving our country in Afghanistan.

After complimenting the Bean family, Biden departed from his script to tell little Margaret Catherine, “I love those barrettes in your hair, man. I tell you what, look at her. She looks like she is 19 years old sitting there like a little lady with her legs crossed.”

According to theNew York Post,  the young child is in elementary school. She was joined at the event by her two brothers and her mother. It must have been extremely embarrassing for Mrs. Bean to have her young daughter sexualized by the President of the United States.

This was not the first time during his presidency that Biden has been criticized for inappropriate comments about young children or women. In February, during a video conference, he flirted with an Arizona nurse and said that she appeared to be as young as a “freshman” in college. Even during Memorial Day weekend, Biden posted a questionable picture online. It showed the President holding an ice cream cone talking to a young girl.

As Biden loses more of his mental competence, Americans can expect more of these inappropriate episodes to continue. How many more of these will occur before those close to him decide to intervene?

While flirtatious comments and behavior about women and young girls are offensive, his mental incapacity could lead to dangerous decisions impacting our national security. The lives of Americans could be in jeopardy because the nation is being led by someone who is literally “losing it.”

Let us hope those who can encourage either a resignation or can invoke the 25thamendment decide to act for the sake of the country. How much longer will Americans have to endure this unacceptable risk?

Jeff Crouere is a native New Orleanian and his award winning program, “Ringside Politics,” airs nationally on Real America's Voice Network,AmericasVoice.News weekdays at 7 a.m. CT and from 7-11 a.m. weekdays on WGSO 990-AM & Wgso.com. He is a political columnist, the author ofAmerica's Last Chanceand provides regular commentaries on the Jeff Crouere YouTube channel and on Crouere.net. For more information, email him at jeff@ringsidepolitics.com