Jeff Crouere
|
Posted: Sep 10, 2016 12:01 AM
Share   Tweet
The opinions expressed by columnists are their own and do not necessarily represent the views of Townhall.com. 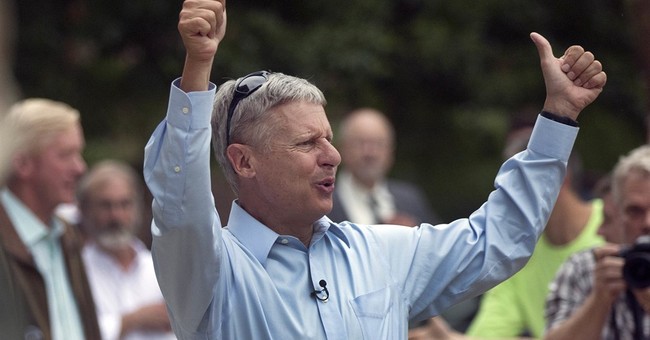 Just one day after jealous 2012 Republican presidential candidate Mitt Romney recommended that Gary Johnson, the Libertarian Party presidential nominee, be included in the debates, the idea has been exposed as patently ridiculous.

On Thursday’s edition of the MSNBC program “Morning Joe” Johnson was asked “what about Aleppo?” Incredibly, the candidate who is auditioning to be Commander-in-Chief of the United States of America, responded, “and what is Aleppo?” His ignorance of the city in the center of the Syrian civil war, the greatest humanitarian crisis since World War II, is a disqualifier for Johnson’s quixotic presidential campaign.

It is inexcusable to be uninformed about a city that has endured four years of constant bombardment and incalculable human suffering. Once Aleppo was a bustling city with two million residents, but, today, its population has declined to fewer than 200,000 survivors.

Aleppo has been completely devastated by the war that has pitted a dictatorship allied with Russia fighting against a variety of rebel forces, some working with the U.S. Both sides in the conflict are also battling the growing plague of the terrorist group ISIS.

Knowledge of Aleppo is part of any candidate’s “Foreign Policy 101” introductory course to world affairs. It is a city that is important because it has been so adversely impacted by the two main forces that are growing in influence in the Middle East, namely ISIS and Russia.

Even though he ran for President and failed miserably in 2012 as the Libertarian Party nominee, Johnson is still clearly not ready for prime time. Obviously, he has not been focused on foreign policy, world affairs and national security issues. His emphasis has been on social issues such as the legalization of marijuana and reducing the nation’s prison population. Johnson also supports open borders, believes in abortion rights, and is a staunch advocate of gay marriage. Overall, Johnson is pretty closely aligned with the Democrat Party on many issues. In fact, he even supports President Obama’s controversial and unconstitutional executive orders granting amnesty to millions of illegal immigrants.

Even though Johnson agrees with Hillary Clinton and other Democrats on many social issues, most liberals upset with their nominee will vote for Jill Stein, the Green Party presidential nominee. For Republicans upset with Donald Trump, Gary Johnson should not be an option. Unfortunately, due to his fiscal conservatism, Johnson is appealing to some Libertarian leaning Republicans. If given enough exposure, he has the potential to take more votes away from Trump than Hillary Clinton. If Johnson is given an even bigger platform, such as a televised presidential debate, he could peel enough votes away from Trump to hand the election to Hillary Clinton.

Thus, it was very revealing that Romney, an establishment moderate Republican, pushed for Johnson to be included in the debates. It shows that Romney only has one interest, stopping Donald Trump from becoming the next President of the United States.

All Republicans should be working non-stop to defeat Clinton, but Romney is obviously doing just the opposite. He is putting his petty interests and jealousies above his party and his country. Romney is clearly still resentful about Trump’s success and smarting about his failure to stop his nomination.

In return, Trump has ridiculed Romney as a loser and blasted the former GOP nominee for his inept 2012 campaign. As a two-time presidential candidate, Romney had his chances to win the White House and was rejected by the American people. He can’t get over his losses and wants to prevent Trump from being elected and moving the Republican Party and the country in a different and more conservative direction.

At this point, Americans have been subjected to enough nonsense from both Romney and Johnson. Both of them are failed presidential candidates who need to just shut up and go home.