The Racist Democrat Running For President

Jeff Crouere
|
Posted: Mar 12, 2016 12:01 AM
Share   Tweet
The opinions expressed by columnists are their own and do not necessarily represent the views of Townhall.com. 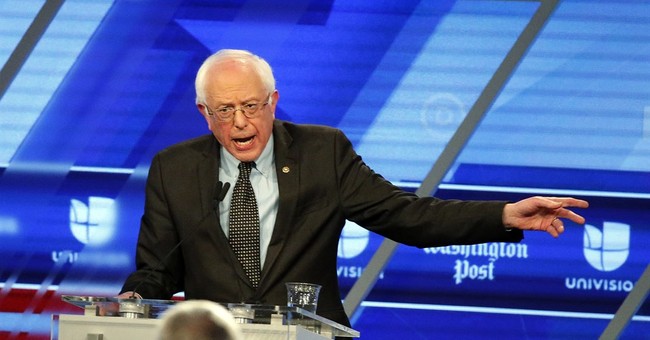 This is incredibly ironic because Sanders, a committed socialist, was relatively poor until the age of 40. He was never able to earn an adequate living until he started in politics. Before he entered elective office, Sanders engaged in carpentry and other odd jobs, drove an old Volkswagen Beetle and lived on public assistance.

Once he started getting elected to office in Vermont, Sanders obviously forgot his impoverished roots. However, Sanders is not the only white person who has had to deal with poverty. In fact, today, according to the latest U.S. Census data, all of the poorest counties in the country have an overwhelmingly white population, at least 95%. According to Peter Hasson of the Daily Caller, “The nation’s poorest county, Owsley, Kentucky, is more than 98% white, and it’s only getting poorer.”

Hasson cites examples of other extremely poor counties in Kentucky that have an almost exclusively white population. In fact, across the Appalachian states, the Deep South, and in the Rust Belt there are literally millions of poor white people struggling to survive in the Obama economy. These folks will undoubtedly be quite surprised to know that Bernie Sanders believes that they do not know poverty.

In our country, there are white residents living in ghettos and white people comprise the majority of our welfare recipients. According to recent data from the Department of Agriculture, there are approximately 19 million white people in the United States receiving welfare benefits. Overall, 10% of white Americans are facing poverty. While this percentage is less than African Americans and other minority groups, it is still a large number of people for Sanders to ignore.

It seems that in his quest to appear progressive on race issues, Sanders is willing to disregard poor white Americans. At the debate, he was displaying his utter ignorance and reciting nonsense from the Democrat Party playbook. In this familiar script, only minorities understand real suffering and oppression in this country. This is complete pandering and while it may help Democrats garner a solid majority of minority votes, it will also inevitably lead more white voters to the Republican Party.

Sanders often recites racist anti-white rhetoric on the campaign trail. For example, not only does he believe that only African Americans know poverty, but, he also states that only African Americans know what it is like to be “hassled” by police or “dragged out of a car.” Really, Senator Sanders where are your statistics to back-up these charges? Of course, he does not have the proof and the media never challenges him to tell the truth. In contrast, the media loves to demonize Republicans and if one of the GOP presidential challengers had made such inaccurate and asinine comments about African Americans, the media would be in an uproar. In the aftermath of these comments, there has been virtual silence from the mainstream media even though Sanders was utterly wrong.

This type of blatant racial appeal is nothing new for Sanders. Several months ago, he aligned with the radical group Black Lives Matter and agreed with their agenda. Even worse, he allowed their representatives to hijack one of his campaign events and steal the microphone from him.

Recently, Sanders met with race hustler and accomplished shakedown artist Rev. Al Sharpton in a bid to appear more sympathetic to African American voters. Ironically, despite his best efforts at soliciting support from minorities, Sanders is being destroyed by Hillary Clinton among African American voters. She has scored massive victories throughout the South, including an 83-17% destruction of Sanders in the Mississippi Democratic primary on Tuesday night.

In the weeks ahead, Americans should expect more anti-white rhetoric from both Sanders and Clinton. Of course, they hope this will appeal to liberal whites and African American voters.

Along with their race based bombast they will continue to espouse economic policies modeled after the failed Great Society programs of the 1960s, which did very little to lift Americans out of poverty. Today, we have 47 million Americans mired in poverty, a serious crime problem and millions of broken homes and one parent families, courtesy of our federal government.

The “solutions” from Sanders and Clinton just trap more minorities and whites in government assistance programs that do not provide real opportunities.

There is certainly rampant poverty among Democrats today, a poverty of fresh thinking.