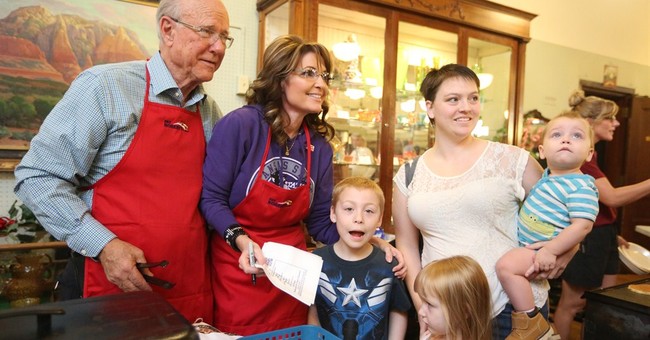 Since she burst on the national scene in 2008, the national media has enjoyed poking fun and mischaracterizing former Alaska Governor Sarah Palin and her family. The main reason for their obsession is that Palin is an unabashed conservative who is articulate and popular with millions of Americans.

From the reporting about her supposed shopping spree during the 2008 race for Vice President to the continuing rumors about her marriage, the media has been unrelenting in their attention and almost universally negative coverage.

The media narrative is that the former Alaska Governor is a dumb conservative woman with lots of kids who lives in the remote wilderness. They claim she has succeeded because of her good looks and persuasiveness, forgetting that the real reason for her success is her courage.

Sarah Palin is able to withstand assaults from Democrats, the media and her own party. Many times she is on an ideological island fighting all sides, but not backing down because she stands firm on principle.

If Palin is such a dimwit, why is she such a successful author, speaker and media commentator who has earned millions of dollars? She is in demand across the country because of her message and her sincerity. She really believes in constitutional principles and conservative solutions to the problems our country faces today. Her commentaries reflect her true beliefs, not a sordid public relations gimmick.

Because of her genuineness, the media hates Palin and is on a relentless mission to destroy her and her family. The latest case of media harassment concerns an incident that occurred at a private party in Alaska. At the event, there was a fight involving members of the Palin family.

Much of the media coverage of the party has revolved around Sarah Palin’s daughter, Bristol. In reality, she was attacked at the party as were other members of the Palin family. Incredibly, this was a cause for amusement for members of the media such as Carol Costello of CNN, who referred to the police recording of the incident as the “best minute and a half of audio we’ve ever come across.”

What was so special about the audio? It featured Bristol Palin describing her sister being pushed and thereafter “some guy” pushing her down and dragging her “across the grass.” Eventually, Bristol was pushed down again, and her $300 sunglasses and shoes were stolen.

According to Costello, it is just hilarious that a young mother was attacked at a party! Even the liberal hosts of MSNBC’s “Morning Joe,” Joe Scarborough and Mika Brzezinski admitted that they were guilty of treating the event as a humorous incident. According to Brzezinski, “the more we’ve learned about what happened, it’s clearer that it’s not that funny.”

Not only is it not funny, it is sad that the Palin family was probably targeted because of the media ridicule they have received for the past six years. Even Scarborough admitted that “there is the very real possibility that something terrible happened to them.”

What is even worse than being attacked at a party is the constant media bias that the Palin family endures. The unceasing hatred toward the Palin family is reflected in their negative media coverage. As Bristol Palin noted on her blog, “Imagine for a second the outrage that would happen if Chelsea Clinton had gotten pushed by some guy. Had she tried to defend herself, the liberal media would’ve held her up as some feminist hero."

In this case, Bristol Palin was the hero who defended her sister and the villains were the jerks who pushed her and the members of the media, like Carol Costello, who wear their liberal bias as a badge of honor.
Amy Coney Barrett's Nomination Just Got Endorsed from an Unlikely Source
Matt Vespa