The Federal Reserve is contemplating another quantitative ease. This would be the third one since August of 2009. Like the other’s it won’t make a difference-except because they are artificially devaluing the US dollar, it will make asset prices go up so people will “feel” richer.

The idea is that if they act, they can decrease interest rates. Lower interest rates supposedly create demand so business and people borrow more, creating more economic activity. However, rates are already close to zero. I just had an adjustable rate mortgage drop to 3.1%.

Companies and individuals don’t act on macro. They behave on microeconomic principles. That means, while they look at the big picture, it’s marginal things that cause them to act. Another QE from the Fed isn’t going to move the needle enough to get any economic fires started.

The problem right now is the money that gets created sits. There is no economic velocity with regard to money. It’s not turning over because economic activity is stalled at virtually every level, and in every industry.

Companies see the macro, a decline with continuing problems in Europe; a slow down in China, and a fiscal cliff in the US, and then look at the micro in their own backyard. It’s not any better. Retail sales and consumer spending are flat. There just aren’t as many customers coming through the door. 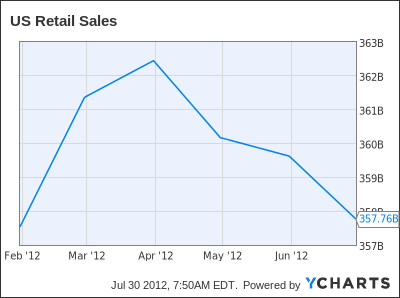 US Retail Sales data by YCharts

If we want to change the game, we have to think micro, not macro. There is little the Fed can do on a micro level given the state of the economy. The only one that can release the dam that’s creating a reservoir of despair is the President by agreeing to tax cuts for corporations and individuals at all income levels. Then, at the margin, behavior will change.

The Romney Character Assassination Has Begun

The Democrats cannot win on the facts. They tried to bend the facts, but the data keeps exploding in their face. What’s left in their playbook? Character assassination. Next, comes an article at Business Insider by left leaning Henry Blodgett. The column is a backhanded, “I am just curious” assault on Mormonism. It starts out,

Our next President may be a Mormon, so it seems a good time to learn some things about that particular religion.
For example:
Do Mormons have any weird beliefs or practices that might make a President do strange things?
Is there a Mormon “pope” or other boss that a President might feel some greater allegiance to?
Can Mormons truly separate “church” and “state”–or do they think that their “God’s law” is higher than American law?
And so on…

Cheap shot for sure.

@hblodget
And Now For A Bunch Of Things I Just Learned About The Founding Of Mormonism… http://read.bi/T1246i
Expand

@pointsnfigures
@hblodget were you worried about Obama’s church of choice in 2008? Bush’s in 2000? Clinton in 1992? Does it matter?
@hblodget
@pointsnfigures Or not “worried,” really… I’m not “worried” about Romney’s religion. Mostly curious.

?@pointsnfigures
@hblodget I am not Mormon. You might want to take a trip to Salt Lake if you really want to find out about Mormonism.

31m 57Jeffrey Carter ?@pointsnfigures
@hblodget your was the first I saw going after Mormonism in a backhanded way.

My kids sat in the pews at Obama’s church when Reverend Wright was preaching. It’s a different brand of Christianity, far from mainstream Christianity. Why wasn’t the left curious about what was going on there?

I think we know the answer. It’s a double standard. President John F. Kennedy endured the same amount of bigotry back when he was running as the first Catholic. Fortunately for him, he wasn’t a Republican.

I should clarify, my kids attended Wright’s church as a part of a program at the church I belonged to, Fourth Presbyterian. Fourth Pres confirmation classes go to other churches, synagogues, and mosques as part of a confirmation program.

If the Trump WH Ever Gave an Answer Like This About COVID, The Press Would Have Had a Total Meltdown
Matt Vespa
Banks: Pelosi Doesn't Want 'Tough Questions' Because She's Responsible for Breakdown of Security on Jan. 6'
Rebecca Downs
Tucker Carlson Accosted By Hater in Montana Tackle Shop: 'You Are the Worst Human Being'
Rebecca Downs
Anthony Fauci Defends Funding of Wuhan Lab: 'Would Be Negligent' to Not 'Pursue That Research'
Rebecca Downs
Gretchen Whitmer Will Be Stripped of Her Emergency Powers
Rebecca Downs
New CA Recall Poll Sends 'Big Warning Signs' to Newsom
Leah Barkoukis

It’s Fun Watching The Press Humiliate Itself
Townhall
'My butt's been wiped'?: People are trying to figure out what Joe Biden said to reporters upon returning to the White House on Sunday
Twitchy
2020 Election: Another Look at Arizona Election Numbers
Redstate
Why Greeks Hate Jews, or Talmud and Tragedy
PJ Media