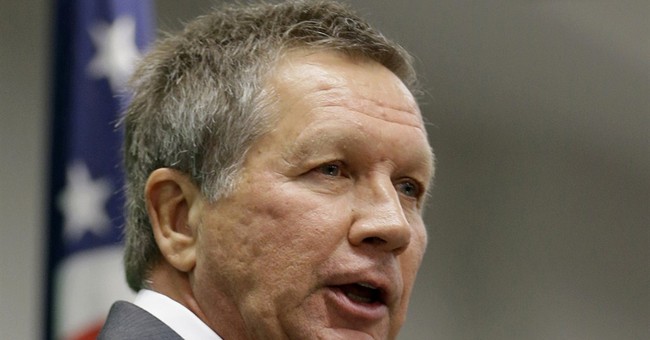 Ohio taxpayers are being treated to an unwelcome taste of DC, as Governor John Kasich brings President Obama’s favorite policies and tactics to the Buckeye State.

Narrowly elected as a small-government conservative in 2010, Kasich has veered sharply to the left despite Republican supermajorities in both houses of the Ohio General Assembly.

Candidate Kasich warned that the Obamacare Medicaid expansion would “stick states with large and unsustainable costs.” But after failing to trim public unions’ power in 2011, Kasich decided last winter that he’d show what a caring moderate he is by hanging the millstone of Medicaid expansion around Ohio’s neck.

Kasich used laughably false talking points to undercut conservative critics, saying the Obamacare expansion would be paid for with “Ohio’s tax dollars” and warning that Ohio’s slice of some imagined funding pie would be served to other states if Ohio rejected it.

Although political wrangling over Medicaid expansion was big news for most of 2013, Ohio’s dino-media let Kasich lie about billions in taxpayer money without batting an eye.

Coordinating messaging with the entitlement lobby the same way Obama frequently does, Kasich developed a “compassionate conservative” stump speech that would make a Clinton blush.

Kasich even improved on Obama’s routine of torching straw-men opposed to big government: just add brimstone. Frustrated by opposition to the Obamacare expansion, Kasich warned his foes that they may be securing themselves a place in Hell.

Nonetheless, Ohio’s legislature – lobbied by grassroots groups the press acknowledges only to sneer at – stripped Medicaid expansion from the state budget and even passed language explicitly forbidding it.

The legislature wouldn’t grow government the way Kasich wanted, so Kasich took a page from Obama’s playbook and pretended the huge policy decision was an executive matter.

Ohio’s newspapers cheered along, but the leftist press is only part of the state’s problem.

Like Obama, Kasich is the shark in a bristling ecosystem of political suckerfish eager to help grow the welfare state.

“I guess for some people in Ohio, unless you are a card-carrying Nazi you can’t be a Republican,” a GOP lobbyist and Kasich advisor told The Daily Beast in an autumn story about intra-party strife.

“Conservatives all oppose Obamacare and Ohio’s Republican leaders have helped lead that opposition,” Ohio GOP Chairman Matt Borges said in a hilarious announcement the day Kasich made official his move to expand Medicaid over legislative opposition.

“On the separate matter of Medicaid, good conservatives have worked to make the program better and engage in a healthy debate on its future,” Borges added.

Probably the first obvious red flag of Kasich’s tenure was when the governor created JobsOhio, a secretive, publicly-funded nonprofit later described in Fortune as an “Obama-like jobs plan.”

Before spending most of 2013 pushing Medicaid expansion, Gov. Kasich was using Obama-worthy class warfare rhetoric to hawk a tax hike on fracking.

In 2012, Kasich toured Ohio promising his fracking tax proposal would redistribute money from rich, out-of-state Big Oil companies in the name of fairness and job creation.

Sure, Kasich’s plan – which the legislature and industry now tepidly support, after watching him ram through Medicaid expansion – would also hit Appalachian landowners, but Gov. Kasich cares about personal property rights about as much as President Obama does.

On school choice, the Second Amendment, and the rights of the unborn, Kasich has signed some good policies sent to his desk by a legislature pushed in the right direction by Ohio taxpayers… but even excluding Medicaid expansion, both of Kasich’s budgets have increased the reach and cost of the State.

Lately, it seems the main difference between John Kasich and Barack Obama is that Obama doesn’t claim to be a limited-government conservative.