Jason Garshfield
|
Posted: Jan 15, 2021 12:01 AM
Share   Tweet
The opinions expressed by columnists are their own and do not necessarily represent the views of Townhall.com. 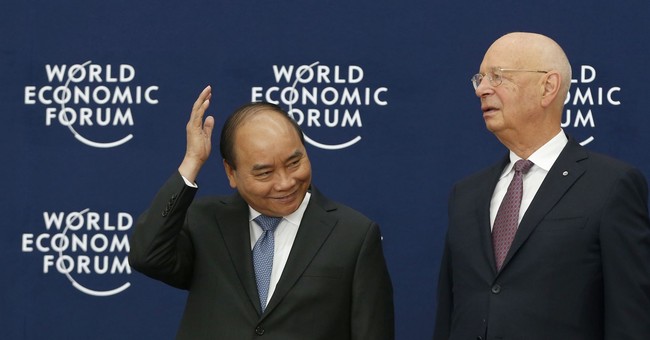 Abraham Lincoln once told the story of a boy who asked how many legs his calf would have, if he called the tail a leg. The answer is four: calling a tail a leg does not make it one.

Capitalism, as traditionally understood, is the system by which the economic market falls under the control of private owners, who are permitted to make a profit on their ownership. As Milton Friedman wrote, a business has no “social responsibility” but to increase its own profits. So long as it does so legitimately, without force or fraud, then everyone benefits: its owners, its shareholders, its employees, and its consumers.

These factors – private ownership and profit motive – are the fundamental premises on which the capitalist system rests. They are not mere gimmicks that can be removed while leaving the whole intact. When they are removed, then whatever else the system may be, it is no longer capitalism.

With that in mind, let us examine “stakeholder capitalism.”

Klaus Schwab lays out his vision in the Davos Manifesto 2020. His system is one where a company must serve the interests of “all its stakeholders,” a term broad enough to encompass just about any tangentially interested party, including “society at large.” The success of a company, Schwab says, should be measured by “environmental, social and good governance objectives.”

When a business is compelled to work, not in its own financial interest, but in the interest of some greater purported social good, then that is not capitalism. We may debate the merits of such a stance, but to call it “capitalism” is akin to calling a tail a leg.

One might argue that the David Manifesto is meant to be a set of recommendations for businesses to voluntarily follow, rather than a blueprint for government action. This is nonsense. In anarticleforTime, Schwab explicitly attacks the belief that “government should refrain from setting clear rules for the functioning of markets.”

Schwab’s language is slippery, and deliberately so. He is hinting broadly at his aims, but backing off just enough that those who read the clear meaning of his words can be accused of jumping to conclusions. He does not outright call for an end to capitalism, but he makes clear his intention for a system that would abandon its fundamental elements.

Schwab has used the economic fallout from the COVID-19 crisis as a justification for his proposals. We are,he says, living in “a sharp economic downturn,” and we can avoid further catastrophe only if we “act jointly and swiftly to revamp all aspects of our societies and economies.”

Except that the current crisis is not the result of capitalism. It is the result of a pandemic, and particularly of the economic shutdowns implemented by governments worldwide. The solution is not to revamp our entire economy; it is to allow the market to go back to normal.

Ironically, these shutdowns rely on the same logic that underpins Schwab’s vision of “stakeholder capitalism.” Businesses are being denied the opportunity to reopen – even if their owners, employees, and consumers all want it – in the name of a government-defined public good, independent of the personal interests and against the free will of almost all those involved.

And here we see how disingenuous Schwab really is: after governments around the world have caused economic disaster by implementing a system close to what he advocates, he is attempting to redirect the frustrations of a demoralized public, not onto the direct cause of the economic devastation, but onto the capitalist system itself.

When pundits lament that Americans are losing faith in experts and institutions, they should lay some of the blame at the feet of Klaus Schwab. There can be no faith in authority so long as men of his stature insist that we accept their claim that a tail is a leg.