Leave School Choice to the States 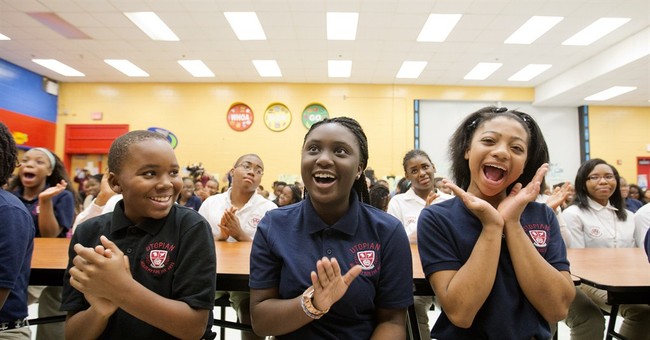 Like the guy who won his office March Madness pool by consulting goat entrails, the center-left think tank Third Way is right about federal vouchers for all the wrong reasons.

In a “memo” earlier this month, two Third Way analysts vigorously argued that Congress should not include a federal voucher program as a part of the Elementary and Secondary Education Act (ESEA) reauthorization. However, the five reasons they give to oppose federal vouchers range from flawed to erroneous. Nevertheless, though the evidence suggests that school choice programs benefit students and are popular among voters, Congress should leave it to the states.

Third Way claims that there is “little convincing evidence that students who receive vouchers are better off for it.” However, Third Way relies on outdated studies and misleading analyses and ignores a mountain of evidence that school choice programs benefit students.

School choice is one of the most-researched education policies, and the best studies overwhelmingly find positive results for some or all categories of participants. Eleven of 12 random assignment studies found statistically significant positive outcomes for students who won a school voucher or scholarship lottery relative to students who entered the lottery but did not win. For example, a study of a pilot program in Charlotte, NC published in the Policy Studies Journal in 2008 found that voucher students scored eight percentile points higher than the control group in reading and seven percentile points higher in math.

Random assignment studies are the gold standard of social science research because they allow researchers to isolate the effect of the intervention, similar to medical trials where doctors randomly administer a drug to some patients but not others in order to determine the drug’s effectiveness.

Third Way, however, ignores the gold standard studies, omits the positive findings for low income and minority students from the very research it cites, and points instead to analyses that compare apples and orangutans. For example, Third Way points to a 2013 Politico article that claimed Milwaukee voucher students underperformed their public school counterparts on standardized tests. However, it is misleading to compare the mostly low-income voucher students to the general student population, which includes students from wealthy families. Previous random assignment studies by researchers at Princeton and the Brookings Institution found that Milwaukee voucher students scored significantly higher than the control group on math and reading exams. Moreover, the average cost per pupil in Milwaukee’s public schools is more than double the average $6,442 voucher.

While regulations vary considerably, most school choice laws (particularly scholarship tax credit laws) do not impose the public school testing regime on private schools accepting school choice students. Third Way asserts that this is “incredibly problematic” because it is “impossible to tell how voucher students or specific groups among them, like students with disabilities or students of color, are faring from school to school—let alone compared to their non-vouchered peers.” However, imposing standardized tests has the potential to stifle the very the diversity and innovation that gives choice its value.

When tied to the “annual goals” and potential “repercussions” that Third Way advocates, standardized tests drive what is taught, when it is taught, and how it is taught. Such so-called “accountability” measures create a powerful incentive for schools to conform, depriving parents and students of the ability to choose schools that chart a different course.

It is inappropriate to impose an accountability system designed to regulate a monopoly on a market. Private schools are directly accountable to parents, who have the ability to vote with their feet if the school fails to meet their needs. By contrast, public schools are accountable to politicians and bureaucrats, not parents. Indeed, many low-income families have no financially viable options besides their assigned district school. Without the crucial feedback loop that direct accountability to parents provides, states and localities (and even the feds) have imposed numerous regulations to improve quality, generally with little success. Unfortunately, these top-down regulations have become synonymous with “accountability” when they are but a pale imitation of direct accountability to parents.

3. There is no evidence that school choice programs “wreak havoc” on school district budgets.

Third Way laments that school choice could “destabilize district financial planning.” It is telling that they don’t point to a single example. Even more telling, their concern assumes that there would be a mass exodus from the public schools if families were given the option to leave and take the funds dedicated to their child with them. As David Boaz once observed, “Every argument against choice made by the education establishment reveals the contempt that establishment has for its own product.”

Third Way asserts that “letting the money follow the child” would “divert limited … resources away from districts needing financial assistance the most.” This assumes that a lack of resources is what ails low-performing schools. However, if funding were the main driver of performance, then at about $30,000 per pupil, Washington, D.C.’s public schools would be among the best in the nation instead of the worst.

There is little compelling evidence that resources drive performance. A 2012 report on international and state trends in student achievement by researchers at Harvard, Stanford, and the University of Munich found that “Just about as many high-spending [U.S.] states showed relatively small gains as showed large ones…. And many states defied the theory [that spending drives performance] by showing gains even when they did not commit much in the way of additional resources.”

Moreover, the available evidence suggests that the positive impact of choice and competition outweighs any potentially negative impact from lower resources. Twenty-two out of 23 empirical studies found that the performance of students at public schools improved after the enactment of a school choice law. One study found no statistically significant difference and none found any harm. School choice programs empower low-income families to choose the schools that work best for their children, which means that public schools have to be more responsive to their needs.

Third Way claims “Americans overwhelmingly reject the idea that vouchers are an effective way to repair our country’s education system.” As evidence, they cite a 2013 PDK/Gallup poll, which found that 70 percent of Americans opposed vouchers. However, in a 2014 survey by Education Next and Harvard University’s Program on Education Policy and Governance, 60 percent of Americans favored scholarship tax credits and 50 percent favored universal school vouchers.

Moreover, Americans are likely to support school choice at even higher levels over time. A 2014 poll by the Friedman Foundation for Educational Choice found the highest levels of support for school choice policies among Americans aged 18-35, with 74 percent favoring scholarship tax credits and 69 percent supporting vouchers. Even the 2013 Gallup poll found that 75 percent of 18-29 year olds and 59 percent of 30-49 year olds support school vouchers.

School choice programs benefit participating and public school students, increase accountability to parents, empower low-income families, and have the support of a growing majority of voters. So why not support a federal school choice law?

is not based simply on a commitment to the original Constitution, as important as that is. It also reflects an understanding of why the Founders were right to reserve most subjects to state, local, or private endeavor. The Founders feared the concentration of power. They believed that the best way to protect individual freedom and civil society was to limit and divide power. Thus it was much better to have decisions made independently by 13–or 50–states, each able to innovate and to observe and copy successful innovations in other states, than to have one decision made for the entire country. As the country gets bigger and more complex, and especially as government amasses more power, the advantages of decentralization and divided power become even greater.

It is very likely that a federal voucher program would lead to increased federal regulation of private schools over time. Once private schools become dependent on federal money, the vast majority is likely to accept the new regulations rather than forgo the funding.

When a state adopts regulations that undermine its school choice program, it’s lamentable but at least the ill effects are localized. Other states are free to chart a different course. However, if the federal government regulates a national school choice program, there is no escape. Moreover, state governments are more responsive to citizens than the distant federal bureaucracy. Citizens have a better shot at blocking or reversing harmful regulations at the state and local level rather than the federal level.

With its proven policy success and public support, it’s understandable that a federal voucher program is politically tempting. Yet politicians should resist the temptation. School choice advocates are winning in state after state—just this month, Arkansas and Nevada became the 25th and 26th states to adopt school choice laws. Federal intrusion, however well-intended, risks undermining the hard-fought effort to expand educational opportunity to all Americans.