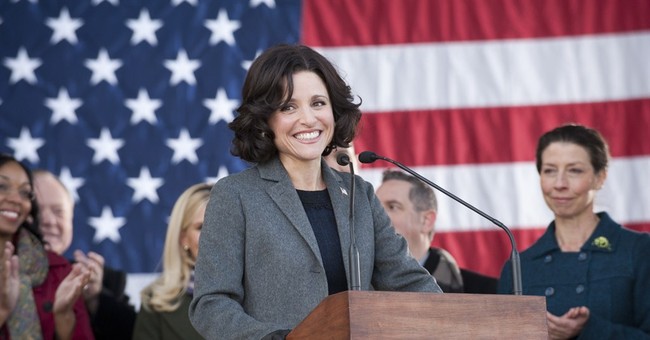 This week VEEP, HBO’s popular comedy about Washington politics, was offered $6.5 million to move its production from Maryland to California. Film industry representatives and California lawmakers are touting the offer as an economic win for the state, while similar groups in Maryland are pushing for an equal or larger package to convince the show to stay in Baltimore. But rolling out the red carpet for expensive movies and TV shows by showering them with scarce taxpayer dollars is a waste of money. Maryland Governor Larry Hogan (R) should celebrate if VEEP leaves the state, not try to persuade it to stay.

If VEEP accepts the offer, it will join three other shows that have agreed to pack up production and relocate to California—FX Network’s American Horror Story (which was previously filmed in Louisiana), VH1’s Hindsight (Georgia), and ABC’s Secrets and Lies (North Carolina).

Maryland offers a fully refundable tax credit that covers up to 25 percent of local movie production costs and 27 percent of TV costs. In 2013, giveaways to VEEP and Netflix’s House of Cards accounted for all of Maryland’s credits. Maryland’s film production tax credit program is not helping small, local filmmakers—it is instead needlessly subsidizing wealthy Hollywood producers.

Since Maryland’s program was updated in 2012, $62.5 million in credits have been authorized. Of this total, 97 percent has been awarded to VEEP ($22.7 million) and House of Cards ($37.6 million). For fiscal year 2014, Maryland’s film credit tax cap was temporarily increased to $25 million. This $25 million exceeded the business tax credits given to cybersecurity, wineries, biotechnology, job creation, and research and development—combined. This year, Governor Hogan can use VEEP leaving as a reason to substantially shrink the film program’s budget.

Tax credits are more valuable than deductions because, while deductions lower taxable income, credits directly reduce tax bills. When these credits are refundable, as they are in Maryland, states actually pay production companies the difference if the tax liabilities are lower than the amount of the credit.

Qualified film production activities are also exempt from sales and use taxes. This has led to foregone revenues in Maryland totaling $17.8 million since 2001, including $4.0 million in 2013 and $3.7 million in 2014.

California recently tripled its film credit spending to $330 million in an attempt to keep productions currently in the state in place and to lure in other productions from across the country. This year, $27.6 million was set aside to accomplish the latter goal. As a base incentive, California offers a non-refundable 25 percent tax credit off of qualified expenses for relocating TV series. The credit declines to 20 percent after the first season is filmed in the state, but productions are eligible for an additional 5 percent credit.

In support of the increase, Mike Gatto, a California state assemblyman who represents Hollywood, said he wanted the tax break to be “[big] enough of a break to incentivize productions to stay here, to locate here, to incentivize long-term health of the industry.” But instead of catering to a favored industry, legislators should be concerned with the health of the overall economy. Gatto admits that lower tax burdens create incentives for firms to locate in the state and expand. A far better policy would be to lower tax rates for everyone—not just film producers.

Interest groups consistently claim that film tax credits pay for themselves. The Maryland Film Industry Coalition, which is “dedicated to improving the business conditions for the film industry in Maryland,” funded a study which found that every dollar granted in film tax credits leads to $1.03 in tax revenues and $3.69 in economic output.

Debra Donaldson Dorsey, director of the Baltimore Film Office, told the Baltimore Sun that VEEP "is a tremendouns [sic] asset to Baltimore City." She continued, "VEEP supports hundreds of Baltimore City small businesses, thousands around the state in addition to the jobs provided for crew and extras. I'm still hopeful that the state will step up and provide the commitment that HBO needs to keep VEEP here."

Film industry groups claiming imaginary benefits to targeted tax credits are nothing new and, even if VEEP offers a surprisingly realistic view of how Washington works, the projections remain pure fantasy. As the non-partisan Tax Foundation chronicles, every independent study of film tax credits has found that they are not effective at creating permanent jobs or economic development. Data from several states find movie production incentives generate less than 30 cents for every lost dollar in tax revenue.

For example, the Maryland Department of Legislative Services came to a slightly different conclusion than did the Maryland Film Industry Coalition. In an October 2014 report, it found that the state’s film tax credit program led to negative long-term outcomes that actually decreased jobs, lowered personal incomes, and slowed GDP growth. For every dollar granted in film tax credits, Maryland receives only 6 cents back—meaning the program is a drain on the budget that, contrary to what the film industry argues, does not pay for itself.

States that choose to enter the competitive arena of film tax credits are set up for losing battles. Unless they continually increase their incentives, film companies will simply pack up and move to states offering sweeter deals, as shown by the recent exodus to California.

Another claimed benefit of film tax credit programs is increased tourism. Although a popular film or television show could theoretically boost tourism, it is puzzling what, if any, tourism benefits Maryland gains from subsidizing a series that takes place mainly in Washington, D.C. The same logic applies for California.

State lawmakers could attract almost any industry if they paid for a quarter to a third of its expenditures, but such a policy would be fiscally unsustainable. Special-interest tax breaks leave other states’ taxpayers to make up the revenue shortfall. Either essential services are cut, or tax rates are raised. Fixing potholes, staffing fire departments, or returning money to taxpayers are all better uses of state funds than subsidizing film production companies.

As Governor Hogan looks for ways to repair Maryland’s struggling economy, letting VEEP leave should be a no-brainer. California residents will lose if state representatives waste money by throwing it at HBO and other production companies for a chance to rub elbows with famous film stars.

Leah Barkoukis
This Is How Minnesota's Democratic Governor Responded to New Round of Riots In the State
Julio Rosas
Tensions High in Minnesota City Where Driver Shot Dead by Police
Rebecca Downs
'Fox News Sunday' Host Chris Wallace Did Not Mince Words Calling Out Sec. Buttigieg's Lies
Rebecca Downs
Now, It's Time to Stop Listening to Fauci...Even Liberals Are Calling Him Out
Matt Vespa
With Mixed Up Priorities of Boycotts, Biden Administration Fails to Protect Human Rights Abuse Victims

Letting Hunter Biden Off Is A Message To Us Peasants
Townhall
'WE WILL NOT COMPLY': The City of Burbank put up a chain-link fence to keep Tinhorn Flats from opening
Twitchy
Rioting and Looting in Suburban Minneapolis After Young Black Man Shot and Killed by Police
Redstate
The Morning Briefing: John Boehner Reminds Conservatives Why We Didn't Like Him
PJ Media