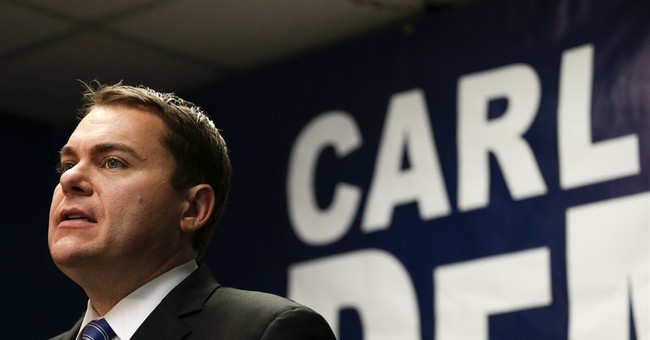 Jared Meyer interviewed former San Diego City Council member Carl DeMaio on March 24 on the subject of what can be done to solve the growing problem of the state and local pension debt crisis. DeMaio now chairs Reform California, a political action committee seeking to place pension reform on the ballot statewide.

JM: Could you describe the pension reforms that you instituted in San Diego and what they accomplished?

CD: The public sector government pension programs are Ponzi schemes—there’s no better way to describe them. The formulas and the benefits used are unsustainable, and the financial forecasts and models use erroneous numbers and assumptions. At the end of the day, taxpayers will be left holding the bag with fewer services, higher taxes, and billions in debt.

What we did in San Diego was shut down that failed system and moved public sector retirement funds to 401(k)s. These 401(k)s shield taxpayers from losses and force politicians to pay for bills in the year in which services were provided. With a 401(k), employees pay their own contributions in that year. This means no hidden debt. Defined contribution plans also provide for a public sector worker’s retirement that’s benchmarked against what the local labor market provides private sector employees—no better, no worse.

JM: How large is this problem right now if we’re looking at the entire United States?

CD: This is a huge problem in three ways.

No. 1, we’re talking billions of dollars in debt, and it’s not just the official debt. When you true up the numbers with realistic assumptions, you find that the amount of debt is far greater than government officials are willing to admit. In California, the official number is around $150 million. But, with realistic return on investment assumptions and mortality rates, you find that the real number is closer to $500 billion—half a trillion dollars—just for California alone. In San Diego, they say the debt is $2 billion. Well it’s more like $4 billion.

Second, to pay the debt service, you are seeing services cut and taxes and fees increased. This unfunded liabilities problem is having an immediate effect on the quality of life, and it will continue to have a growing negative effect as the costs rise.

Third, we’re talking about retirement security that is not going to exist. You will have systems that go bankrupt, and, when the Ponzi schemes collapse, who will be responsible? What these unions are doing to numerous members is unconscionable. The union bosses know that they’re going to get their fat checks. Their attitude is “who cares about what’s going to happen to the next generation?”

Well, I care. And I think that taxpayers want affordable pensions for government employees to protect the quality of their services, but they also want to know that we treat our employees properly and that they have retirement security.

JM: When did this really start becoming a problem, and why?

CD: Politically, it’s the rise of public sector unions. As soon as we allowed government employees to unionize, those unions began to buy their management. They use their dues to elect city council members, county board members, and state assembly members.

That’s when the balance in public sector pensions became completely out of whack. The government union bosses, once they bought legislators, then went to the negotiating table and said, “Give us these big benefits.” And politicians are all too willing to spike benefits and punt the costs to future generations.

JM: When talking about pension reform, what have you found is the most effective way to get the public to notice the extent of the problem?

CD: Most people talk about the size of state and local debt or the amount of money that we’re spending on pensions. That’s not as effective or persuasive as showing them the actual pension payoffs. When I found that a librarian in San Diego was getting $234,000 a year in pension payouts—for life—people were outraged. Or, the number of firefighters that are walking out with $100,000 pensions at age 50. Those payments are overly generous and not sustainable. And so when you show people the actual payouts and how lavish they are, how irresponsible the payouts are, then the public realizes that the public pension system is outrageous and that it needs to be reformed.

JM: Could you talk about the opposition you faced from the public sector unions when you were running for office?

CD: For unions, this is the third rail. They will fight tooth-and-nail to lie, cheat, and steal to keep these pensions—and I say that very candidly. They will literally lie about the notion of the pension crisis. They will look you straight in the face and they will make up numbers. They will say that everything will be just fine, that this is just a temporary investment drop, that there’s no real crisis, and that everything will correct itself.

When I say they cheat, they’re willing to file lawsuits to block reform, they are willing to stand in front of signature gatherers to stop pension reform from getting to the ballot, and they are completely focused on doing whatever they can to defend these systems.

Finally, when it comes to stealing, we saw this in San Diego. They have their board members giving out disability to people who didn’t deserve it, causing a major cost crisis in the system. Or they would give purchase of service credits at discount prices. They allowed government union members to buy phantom years of service at bargain basement prices. They would say, “Oh if you pay $1,000, we’ll give you an extra year of service.” Well the actual cost to taxpayers of another year of service is probably $30,000. Plus, nobody should be buying years of service in the first place—workers should actually be serving those years.

JM: Do you see the federal government eventually coming in to bail out the states?

CD: The unions themselves know that this is a Ponzi scheme, and that at some point the bill is going to come due. What they’ve argued all along is that taxpayers deserve to pay more in taxes and receive fewer services because taxpayers somehow brought this upon themselves. They were cheap with government workers’ salaries, and so the only way they can make it up is on the benefits side.

The expectation that unions have is quite arrogant.