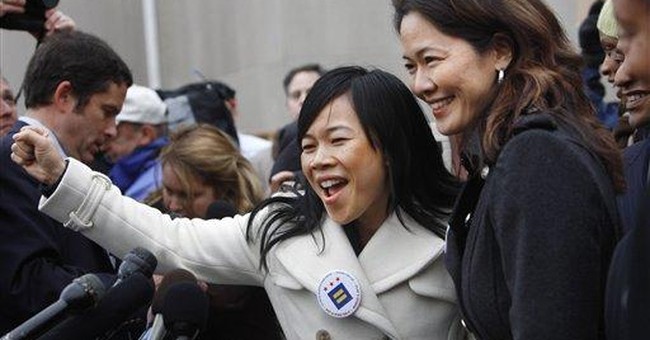 March 9, 2010, is the first day that same-sex couples in District of Columbia (D.C.) will be able to have legal marriage ceremonies. More than 100 couples — some coming from nearby states — have licenses for ceremonies. So-called same-sex “marriages” are legal in five other states — Connecticut, Iowa, Massachusetts, New Hampshire and Vermont — where the words “bride and groom” are replaced with the names of the individuals, who are each called “spouse” or “Person A” and “Person B.”

Those who oppose same-sex “marriage” are called by derogatory labels: bigot, narrow-minded, hate-filled among the nicest. Such name-calling obscures the very real problems associated with watering down and denigrating traditional marriage.

Let’s begin with the basic argument that people are “born gay.” Apparently, activists are operating under the assumption that if they say this long enough, people will believe it. Yet the science is not there to substantiate their oft-stated premise that homosexuality is genetic and is immutable. The studies that purport to support the idea have not been replicated; instead, they have been repudiated or considered inconclusive. The generally accepted theory is that some people may be predisposed to emotional vulnerabilities that can be exacerbated by external factors, such as parental approval, social acceptance and gender affirmation. Indeed, a growing number of individuals have chosen to reject the homosexual lifestyle. In addition, there is an acknowledgement, even among homosexuals, that persons can “choose” their sexuality (be bisexual or not).

Let’s look at five other myths associated with same-sex “marriage.”

Myth #1: Having same-sex couples celebrate their love does nothing to harm anybody else’s marriage or damage the institution of marriage.

The argument that “what I do is my business and doesn’t hurt anybody but me” is an old argument that has been refuted in numerous ways. The institution of marriage has existed throughout history in almost every culture to protect women and children. Marriage is already under attack from a promiscuous, me-centered culture that derides any male who “gives up” his rights for altruistic reasons and labels him a “powerless wimp.” Likewise, women who “hold out” for marriage are called “prudes” and worse. These cultural changes are bad enough. Society opens the floodgates of cultural destruction if marriage becomes meaningless. Counterfeits always devalue the real thing. Counterfeit marriage will lead to “anything goes” unions. There will be no legal reason to deny anyone the umbrella of “marriage.” The age of those seeking unions will be irrelevant; their blood relationship won’t matter; the number of partners seeking the ceremony or any other characteristic will become meaningless. The whole institution of marriage will be rendered irrelevant. Just look at Scandinavia: they legalized “same-sex marriage;” now, cohabitation rather than marriage is the prevalent household arrangement.

Activists argue that same-sex “marriage” is like the civil rights issue of racial equality, that homosexuals “deserve” the right to “marry” and have the same benefits and protections of marriage that heterosexuals enjoy. Any denial of that “right,” they say, violates their “equal rights.” The reality is that the same-sex “marriage” effort is more about getting society’s approval for behavior; it is not about benefits or protections. All American citizens have the right to marriage, and all the protections that homosexuals seek are already embedded in American law. Anyone can legally designate beneficiaries and establish who can or cannot visit them in hospitals. Clearly the push is for approval, mainstreaming an aberrant set of values and condoning certain behaviors; it is not for establishing “rights” that already exist. Marriage is more than a “legal” institution; it is an institution supported by society as a haven for children, the foundation of the family, and the well-spring of civility and national strength. The homosexual activists are seeking a special right, one that denies the human truth that male and female are designed to be “one” and are created as the natural means for propagating the human race.

Myth #3: Any group of people — including homosexual couples — can contribute to the well-being of children and form a productive unit of society.

Conveying marital status to any group of people gives them societal affirmation and establishes them as an essential element of society when the research indicates they are not capable of performing those functions. Social science research sends a clear and unequivocal message: the married couple, mom-and-dad family is best for children — not just good, but best in comparison to any other household arrangement. Other households (headed by anyone other than the married mother and father) are far inferior and damaging to children’s well-being and their futures. Already our children are at risk from the increase in cohabitation and the decline in marriage. If we add same-sex “marriage” into the mix, we are disregarding the best interests of our nation’s children. American children are at risk in carefully-documented ways when they are raised in any household but a married mom-and-dad family: They make worse grades, are likely to drop out of school, more prone to getting into trouble, have greater health problems, are more likely to experiment with drugs and/or alcohol, and will likely engage in early sexual activity and thus be more likely to contract a sexually-transmitted disease, have an abortion(s) and/or teen pregnancy.

Myth #4: Same-sex “marriage” is a matter of freedom of conscience and freedom of religion.

This is one of the more insidious myths related to “same-sex marriage.” There is no way to ignore the fact that same-sex “marriage” violates the deeply-held beliefs of millions of Christian, Jewish and Muslim citizens whose opposition to same-sex “marriage” is founded on central tenets of their faith. Knowing this, the homosexual activists are working through indoctrination programs for the nation’s children. Our public schools are becoming the means through which activists plan to change public opinion and the rule of law. Curriculum programs are instilling the idea that there is no legitimate opposition to homosexuality; instead, any opposition is bigoted and hate-filled. Laws are being changed to force innkeepers, businesses and even our social services to celebrate homosexuality.

More to the point, same-sex “marriage” is already used as a bludgeon to destroy the religious liberties and drive out Christian social services. One recent example: Massachusetts and the District of Columbia have both driven out Catholic adoption agencies, whose moral stand is unacceptable to the homosexual agenda. The radical politics of homosexuality requires orphans to remain without parents at all rather than to allow a Christian agency the religious liberty to find them a home.

This last myth is probably the one furthest from the truth. In actuality, homosexual unions have a very short lifespan; many of the same-sex “marriages” in Massachusetts are already being dissolved. Further, the health risks associated with homosexual practice are very real and very much in evidence in the emergency rooms of hospitals. There is no denying: Homosexual sex is dangerous and destructive to the human body. Both HIV and HPV are epidemic among homosexual men. Domestic violence is a common problem — twice as prevalent among homosexual couples as in heterosexual ones. Indeed, legally creating a union does not enable two men or two women to become “one flesh,” nor does a legal ceremony give the union sanctity. Instead, the ceremony creates a sham that will devalue all marriages. The government establishes “standards” for measurement and value; to declare a sham union equal to marriage would devalue the “standard” and render all unions worthless and irrelevant. If the U.S. government establishes same-sex “marriages” under law, it will be redefining marriage — completely and irrevocably. Such a powerful statement will contradict the prevailing social science research: There is a big difference between 1) a family created and sanctioned by society when a man and a woman commit to each other and thus form a cohesive unit, and 2) a couple or group of people who live together to form a household in defiance of the prevailing moral codes to render meaningless an institution that has been the bulwark of the family and society throughout history.

Conclusion: The bottom line is that this social issue is a defining moment for mankind, not just this nation. What the homosexual activists are seeking is not a minor shift in the law, but a radical change in the fundamental institution that forms the basis for society. Will we protect marriage as the primary institution protecting women and children, or will we surrender to the forces that claim no one has obligations to others and that adults can do anything they want in their sexual lives regardless of how those actions affect society, especially children, and undermine the public good?