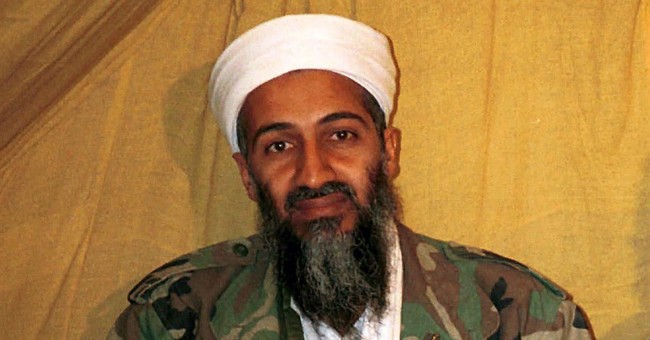 “Bin Laden 2016” raises the question: Does “birthright citizenship,” regardless of parentage, qualify one to become president of the United States?

Now that I have your attention, let’s consider a logical consequence of the current policy of the U.S. government, granting “birthright citizenship” to a child born in the United States of illegal immigrants, otherwise known as an “anchor baby.”

Section I of the 14th Amendment to the U.S. Constitution states:

At the heart of the contentious debate over “birthright citizenship” is the phrase, “and subject to the jurisdiction of.” The author of the phrase, Sen. Jacob Howard of Michigan, made it abundantly clear during Senate debates that it does not apply to alien children:

“It excludes not only Indians but “persons born in the United States who are foreigners, aliens, [or] who belong to the families of ambassadors or foreign ministers.”

"not owing allegiance to anybody else."

Ignoring the interpretation of the men who wrote the phrase is like ignoring Abraham Lincoln on the Gettysburg Address, preferring the scholarship of a guy who once worked for the Gettysburg Planning and Zoning Department.

Similarly, those who espouse universal “birthright citizenship” into the family of God, ignore a key phrase, “who believes in Him,” in the words of Jesus regarding salvation in John 3:16:

“For God loved the world in this way: He gave His One and Only Son, so that everyone who believes in Him will not perish but have eternal life.”

God wants to save everyone, but He makes salvation dependent upon an individual’s absolute and sole allegiance to His Son as Lord and Savior.

Likewise, “birthright citizenship” is based on an absurd interpretation that assumes the phrase, “and subject to the jurisdiction thereof,” means geography. It’s based on the English common law doctrine, “jus soli,” meaning “right of the soil.” The subject of a king could not renounce allegiance to the sovereign ever. Citizens aren’t subjects.

Complete political allegiance is consistent with the oath required to become a naturalized citizen:

“I absolutely and entirely renounce and abjure all allegiance and fidelity to any foreign prince, potentate, state, or sovereignty, of whom or which I have heretofore been a subject or citizen; that I will support and defend the Constitution and laws of the United States of America against all enemies, foreign and domestic; that I will bear true faith and allegiance to the same; …”

The “jus soli” geographic interpretation was incorrectly applied in

Add another boot-strap from a 1982 Supreme Court decision by Justice William Brennan,

Now we come to considering a logical consequence of faulty constitutional interpretation.

There are only two categories of citizenship: born or naturalized, as explained here. Since anchor babies are supposedly born citizens, as opposed to naturalized citizens, why wouldn’t an anchor baby claim that he or she is qualified to become president of the United States under

And that brings us back to the above campaign button: “bin Laden 2016”

Let’s pretend that one of Osama’s wives illegally crossed the U.S. border while pregnant 35 years ago and gave birth here. Let’s pretend the baby’s name is, Anchor bin Laden, and let’s give him at least 512 first cousins. Lots of links in that chain.

That brings us to the present. Anchor is now 35 years-old and running for president.

Following a ridiculous premise, that a child born here to an illegal immigrant is a citizen, can lead to a ridiculous, yet logical conclusion.

It is ridiculous to believe that the 14th Amendment was intended to allow those who commit a criminal act by illegally crossing our national border, or overstaying their visas, to give birth to a “citizen,” regardless of the parents’ political allegiance. It obliterates the essence of U.S. sovereignty—the right of Americans to decide who may become a citizen.

Maybe a reporter will ask Donald Trump if he thinks an anchor baby can become president:

“Are you kidding me? That is really, really, tremendously stupid. Who negotiated that? Really, really stupid!”

It is past time for Congress to use its plenary power over naturalization to pass legislation making clear that a child born in the United States is not a citizen of the United States unless at least one parent was a U.S. citizen at the time of the child’s birth.

As a friend said: “It’s time for anchors away.” Prospectively at least.