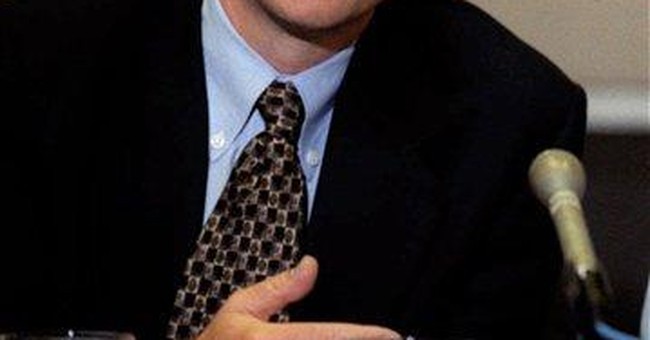 It's been a taxing two weeks for President Obama and his nominees. And there's another nominee with bigger disqualifiers than unpaid taxes.

Imagine. A veteran pornography defense attorney takes a top spot at the agency charged with enforcing the nation's child pornography and obscenity laws.

And that's what will happen if David G. Ogden is confirmed as Deputy Attorney General, the second in command at the U.S. Department of Justice (DOJ), the nation's top law enforcement agency.

Sandy Berger, custodian of classified documents at the National Archives?

Pat Trueman, former chief of the Child Exploitation and Obscenity Section at DOJ says, "We've seen both on adult pornography and on child pornography, [Ogden] is not with us. … Certainly, he reflects President Obama on Obama's positions on pornography, homosexuality and abortion."

"For the adult entertainment industry, the pick could constitute a strong one, considering Ogden's record in representing companies over First Amendment rights and obscenity cases," according to Rhett Pardon of XBIZ.com.

Playboy Enterprises:
1988: a challenge to Puerto Rico's decision to ban obscene content from cable
1986: sought an order forcing the Library of Congress to use taxpayer funds to print Playboy Magazine's articles in Braille against the express wishes of Congress
1990: sought an injunction against the inclusion of Playboy in a list of adult magazines that would potentially be included in the Meese Commission report

PHE, Inc. & Adam & Eve (1990): represented one of the biggest producers of hard-core videos against a multidistrict prosecution strategy by the DOJ.

Ed Whelan, president of Ethics in Public Policy, has this post about Ogden's involvement in the Knox case on NRO's Bench Memos:

In that case, the Department of Justice under President George H.W. Bush had successfully prosecuted Stephen A. Knox for violating a federal anti-pornography law. But when Knox sought Supreme Court review of the federal appellate decision upholding his conviction, Clinton's Solicitor General Drew Days surprised the Court by reversing the government's position and refusing to defend the conviction. After the Senate condemned Days' action by a 100-0 vote and the House did so by a 425-3 vote, Clinton publicly chastised Days and Attorney General Reno eventually overturned his position.

On behalf of the ACLU and other clients, Ogden submitted a Supreme Court brief that advocated the same statutory and constitutional positions that Days has taken.

The National Law Center for Children and Families, where I was senior counsel at the time, was preparing an amicus brief in support of Knox's conviction. We were stunned when we read Days's brief. Thankfully, the Court rejected the Days/Ogden argument, which would have wrapped constitutional protection around child sex exploitation.

Ogden isn't just a lawyer who's had a few unsavory clients. He's devoted a substantial part of his career in defense of pornography for more than 20 years.

The last thing the Department of Justice needs is a deputy attorney general with a track record on behalf of those who've deluged America with pornography and against the federal laws he would be sworn to enforce.