Jane Robbins
|
Posted: Nov 20, 2018 12:01 AM
Share   Tweet
The opinions expressed by columnists are their own and do not necessarily represent the views of Townhall.com. 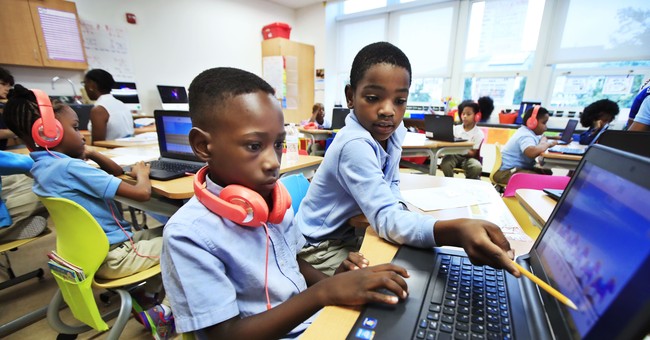 Most public schools are still afflicted with the Common Core national standards. Paid advocates such as the Thomas B. Fordham Foundation continue to push Common Core despite overwhelming evidence of the slow-motion train wreck that has resulted – reduced student achievement by almost every metric. Fordham refuses even to acknowledge the bad news, much less try to rationalize it.

That’s why it was refreshing to hear the blunt truth proclaimed at a Heritage Foundation event last week entitled “Rethinking Federal Intervention in K-12 Education.” At this program the authors of a new Pioneer Institute study, “Common Core, School Choice and Rethinking Standards-Based Reform,” explained how Common Core has not only damaged public education but also threatened the independence of private schools. How? By imposing government strings on the curricular autonomy of the schools that accept government funding via school-choice mechanisms such as vouchers.

Study authors Ted Rebarber of AccountabilityWorks and Neal McCluskey of the Cato Institute advocate restoring genuine diversity in education models by removing centralized government control over K-12 school standards. But the prelude to that argument came from Rebarber, who minced no words in describing the doleful effect of Common Core on education.

“In my view,” Rebarber observed, “[Common Core] is really the worst large-scale educational failure in 40 years.”

Unlike Fordham and its allies, Rebarber offered actual evidence to support his thesis. He demonstrated that U.S. students’ math scores on the National Association of Educational Progress (NAEP) had long been creeping up ever since reliable test results became available in the 1970s. But after release of Common Core in 2010 and full implementation in the fall of 2014, NAEP scores plateaued and then began to decline.

Rebarber focused on scores of the bottom quartile of students, those who were already behind – “the students that were touted as the target for improvement.” Under Common Core, these students’ performance has fallen.

According to Rebarber, “That’s never happened at a consistent multi-year scale [on] the best test instruments we’ve had since we’ve been able to measure in the 1970s. And so that is historic.”

Higher-performing students have been hurt as well. Rebarber’s graph of recent ACT scores showed that the modest upward trend line flattens upon Common Core release and then begins a decline which accelerates with full implementation.

What about U.S. students’ performance in comparison with students in other countries? Rebarber showed another graph illustrating the percentage of 8th-graders internationally who are sufficiently proficient in math to tackle a high-school curriculum that will prepare them for STEM (science, technology, engineering, math) studies in college. The graph showed that high-performing Asian countries prepare about one-third to one-half of their 8th-graders to reach this level, while the U.S. prepares only about ten percent. That places the U.S. in the middle tier of tested nations, along with Kazakhstan, Russia, Hungary, and Great Britain.

“Middle of the pack doesn’t sound that bad,” Rebarber said, “but Singapore gets five times as many of its students at that level. So being in the middle of the pack is not really acceptable.” He also pointed out that the lower-tier countries are just a few percentage points below the U.S.

Why has Common Core math failed so abysmally? Rebarber observed that rather than increasing the rigor of the math standards as promised, Common Core “just calcified the existing [deficient] rigor of the math program” – teaching algebra I and geometry content two years later than do the top-achieving countries. In addition, the standards “ended up pushing some progressive educational methods or dogmas . . . delaying introduction of standard algorithms and other methods that are enforced through the tests.”

The deficiencies that have made Common Core math a punchline are, by this point, well known. But the Pioneer report goes back further in time, exploring the history of “standards-based reform” that led to Common Core. Rebarber explained that when Congress, in 1994, required states to develop so-called “standards,” that word wasn’t presented to conservatives as “very detailed government regulation of curriculum content, curriculum sequencing, and teaching methods.” But over the years, that’s exactly what happened. “Standards became the blueprint around which schools organize their teaching, their day-to-day academic operations. They’re effectively curriculum central planning by government.”

And here we are – not only treading water, but actually sinking. Historic.

Jane Robbins is an attorney and senior fellow with the American Principles Project.