Yet Another Reason President Trump Should Veto Omnibus

Jane Robbins
|
Posted: Mar 23, 2018 12:00 PM
Share   Tweet
The opinions expressed by columnists are their own and do not necessarily represent the views of Townhall.com. 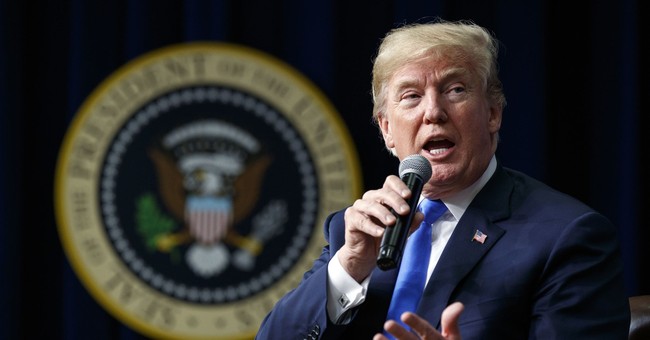 Republicans, not to be confused with conservatives, have produced a $1.3 trillion with a “T” spending bill to direct the money we borrow from China. For all the crowing about reducing the unconstitutional federal footprint in education, funding for the Department of Education (USED) will receive an increase – that’s increase, not decrease – of $3.9 billion. Generally, increasing a department’s budget isn’t the preferred method of winding down its responsibilities.

So this budget reveals zero federal intention to restore local control in education. It also reveals critical information about the current debate on the latest fad: “evidence-based policymaking.” House Speaker Paul Ryan (R-WI) and Senator Patty Murray (D-WA), through their bill entitled “Foundations for Evidence-based Policymaking Act” (FEPA), insist that the federal government needs ever more data on American citizens and ever more authority to mix and match that data. They say this will allow the feds to determine which programs are working (almost none of them) and which aren’t (almost all of them).

Skeptics have pointed out for years that the actual effectiveness of a federal program – documented with reams of research – is apparently irrelevant in deciding whether to continue that program. (This point was made at a January hearing of the House Education and Workforce Committee, called to examine the pros and cons of FEPA-type data-collection and -analysis.) Why, then, should we increase such data-mining if the government plans to ignore the results?

Exhibit A: the proposed spending deal’s increase in funding for (let’s take two at random) Head Start and after-school programs.

Head Start has been around since 1965, the year the federal government blew up the Constitution by taking over education policy. What do we know about the program’s effects on participants? From literally hundreds of studies (see compendia here and here), we know that Head Start is either ineffective or actually harmful to the children subjected to it.

Children’s verbal and math skills seem to be unaffected by Head Start participation; any positive effects seem to “fade out” by second or third grade; and children who emerge from Head Start actually demonstrate more problematic behaviors in kindergarten and first grade. Multiple studies on both Head Start and similar state programs have reached the unsurprising conclusion that young children tend to do better in school and in life when they spend more time with their parents and less in a government institution.

All this research constitutes “evidence” that, under the FEPA concept, should inform policymaking. So did the government zero out Head Start funding as, at best, an utter waste of money? Nope, the proposal is to increase funding – as has happened consistently for the last 50 years.

As for after-school programs, the proposed spending bill boosts funding for the Obama-era “21st-century community learning centers” and “Promise Neighborhoods” -- Big Brother-type schemes that have been referred to as “parent-replacement” programs. These are based on the assumption that the solution to any problem is more federal-government involvement, and especially a federal takeover of functions properly within the realm of parents (student physical and mental health, homework, art or dance or music lessons, and on and on ad infinitum). As evidenced by the breakdown of millions of families, the feds have demonstrated great competence at advising them how to live. See our critique here.

Can we assume that the existing “evidence” demonstrates the effectiveness of such programs? Quite the contrary.

As reported by David Muhlhausen of the Heritage Foundation, “[r]igorous scientific evidence shows that . . . [the] 21st Century Community Schools [program] harms children.” The program failed to affect 21 out of 22 outcome goals concerning homework activities. As for academic achievement, the program affected only two of the 11 outcomes measured – and those two it affected negatively (students “were less likely to achieve at above average or high levels in class and were less likely to put effort into reading or English classes”). And as with the results from Head Start studies, participants in this after-school program were found to exhibit more behavior problems in school than their fellow students who didn’t participate.

Ryan, Murray, and other FEPA proponents dream about the wonderful things that can be done if federal agencies are allowed to pass around citizens’ personal data – without their consent, or even their knowledge – and use it to evaluate program outcomes. But the spending bill obliterates any argument that such data analysis will have any effect whatsoever on government behavior.

This bill exposes the bankruptcy of the FEPA argument. But don’t count on “conservatives” in Congress to recognize that, or to lift a finger to protect privacy and American principles. There is still a glimmer of hope that President Trump may veto the bill, as he tweeted this morning it was still a possibility. Considering leadership’s failure to address the bulk of his budget priorities, it’s hard to see how he has any other choice.