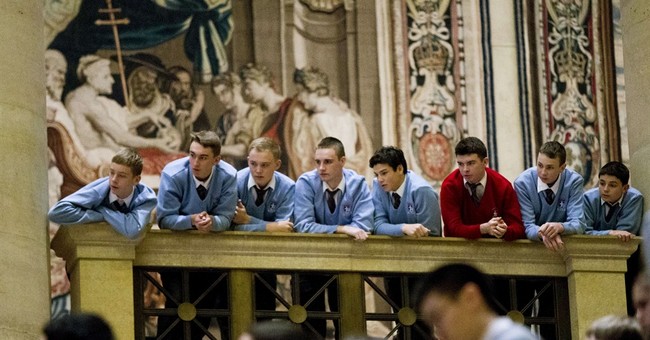 On one level it’s been entertaining to watch the College Board scramble to defend its radical new Advanced Placement U.S. History (APUSH) Framework. When the public can see the truth merely by going to the College Board website and reading the Framework, it’s certainly a challenge to prove that the document isn’t what it clearly is – a leftist polemic that presents American history in a relentlessly negative light. An unfortunate recent performance by College Board vice-president Trevor Packer before a Georgia House study committee suggests that the College Board team is cracking under the strain.

The APUSH course that was in effect for decades was a five-page Topic Outline identifying broad categories of material to be covered but relying on state standards for its content. Teachers had a good idea what content to focus on by reviewing the wealth of resources, including past Exams, available to them. The new Framework replaces the Topic Outline with a detailed 142-page tome that purports to be the “required knowledge” for the course. The new Framework even warned, in bold print, that no content outside the Framework would be included on the end-of-course APUSH Exam (under duress, the College Board has removed this statement – without affirming that, in fact, material from state standards may be included on the Exam).

When the APUSH controversy initially flared up, the College Board offered its first defense: Nothing has changed! APUSH teachers will still teach state-standards content just as they always have. That defense morphed into the claim that the previous Exam was much too broad, and that trying to teach the content from state standards was driving APUSH teachers to distraction. So, the College Board said, we’ll make the detailed Framework the focus so that teachers won’t have to worry about extra-Framework content. Thus did the College Board replace its initial nothing-has-changed argument with an everything-has-changed – and for the better! – argument.

Eventually the College Board appeared to settle on a complete refutation of its original nothing-has-changed claim by embracing, and defending, the biased slant of the Framework. APUSH must present the leftist perspective, the College Board suggested, because that’s how American history is taught in college (at least according to the relatively few professors the College Board consulted).

But in his Georgia appearance, AP vice-president Packer seemed to retreat from this retreat, suggesting that the new Framework actually is more conservative than the old Topic Outline because it eliminates the possibility of leftist professors’ including their idiosyncratic questions on the Exam. (This raises the question why, since he has been in charge of APUSH for 11 years, Mr. Packer would have allowed this to happen, but never mind.) The head spins in trying to grasp the shifting defenses.

Mr. Packer bolstered his new position with a cavalcade of demonstrably untrue assertions about the old and new APUSH courses (too many to relate here – they will require their own article). But toward the end of his testimony, Mr. Packer fell back on the time-honored leftist tradition of smearing his opponents – when you don’t have the facts on your side, resort to ad hominem attacks. He first dismissed the concerns of retired APUSH teacher Larry Krieger, who first sounded the alarm on the APUSH putsch, as motivated by greed. Mr. Krieger, declared Mr. Packer with absolute certainty, is merely angry that he’s losing money because his test-preparation book is now outdated by the new Framework.

Does Mr. Packer realize that the best thing that can happen to a writer of test-prep materials is for the test to change – because then he can write new materials, which schools and families will buy to replace the books they already had? Does Mr. Packer know that Mr. Krieger in fact was offered a lucrative contract to write such new materials, but turned it down because he couldn’t in good conscience profit from an APUSH course that was so deeply anti-American?

Could it be that Mr. Krieger is more honorable than his critics?

But Mr. Packer wasn’t finished with his smears. When asked about the anti-APUSH resolution passed by the Texas State Board of Education, Mr. Packer, in gossipy tones, suggested that Texas Board chair Barbara Cargill can’t be trusted because she rejected the requests of university faculty to serve on a history-standards review committee and replaced them with her own pastor.

Once again, however, Mr. Packer was playing fast and loose with the facts. Ms. Cargill did not place her own pastor on any committee, nor did she reject any university professors. Moreover, the pastor she did nominate is a history scholar who has a personal library of 1,500 history books, all of which he has read and can discuss at length. He also has children in the Texas public schools. In other words, he is exactly the kind of person who, under Texas law, should serve on a history-standards review committee. But Mr. Packer chose to engage in gratuitous slander – what does any of this have to do with APUSH anyway? -- to distract attention from the Texas Board’s rebuke of the College Board.

Mr. Packer’s misrepresentations (to use a nice word) about his opponents – made in a public forum in another state – are simply astonishing. Does College Board president David Coleman condone this behavior? Is the College Board so desperate to defend its rewrite of American history, and so bereft of substantive arguments, that it will stoop to falsehoods and slander?

How low will it go?