Did Slaves Build and Burn the White House?

Jane Hampton Cook
|
Posted: Aug 09, 2016 12:01 AM
Share   Tweet
The opinions expressed by columnists are their own and do not necessarily represent the views of Townhall.com. 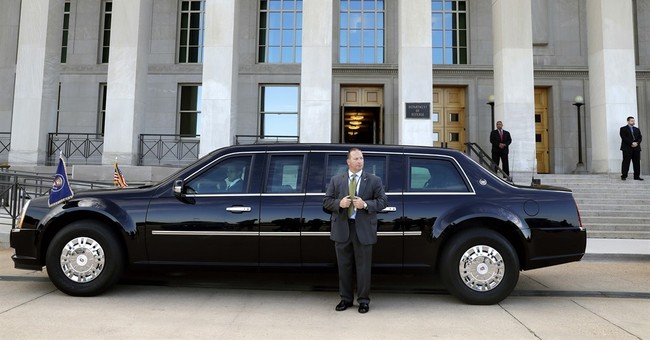 Did slaves both build and burn the White House?

"I wake up every morning in a house that was built by slaves," Michelle Obama recently said at the 2016 Democratic National Convention. Her words brought White House history into public discussion.

Did slaves help burn the White House, too?

During America's War of 1812 against England, a British admiral issued a proclamation calling on slaves to leave their masters. They could join the British military and/or be sent as free settlers to British territory.

President James Madison wasn’t shocked at the tactic. He'd proposed a similar option years earlier during the American Revolution. “Would it not be to depend as well to liberate and make soldiers of the blacks," Madison had said at the Continental Congress. "It would certainly be more consonant to the principles of liberty.”

Britain's 1814 slave proclamation prompted President Madison to warn his war secretary that Washington, D.C. was likely one of the British targets: “the seat of government cannot fail to be a favorite one.”

To be clear, the British were not without racial prejudices. British Admiral George Cockburn, the leading antagonist in my new nonfiction book, The Burning of the White House, wrote: “They have induced me to alter the bad opinion I had of the whole of their race and I now really believe these we are training will neither show want (lack) of zeal or courage when employed by us in attacking their old masters.”

Called the Colonial or West Indies Militia, these former slaves were part of the British marines, soldiers, and sailors who attacked Washington. These forces defeated American forces at Bladensburg, Maryland, on August 24, 1814, and arrived at sunset in Washington, where they burned most of the public buildings, most notoriously the White House and the U.S. Capitol.

Many former and current slaves were pro-American during the attack that led to the burning of the White House.

One former slave, who had already won his freedom, declined joining Britain's militia. Instead, Charles Ball fought side-by-side with the greatest American hero at Bladensburg, Commodore Joshua Barney. "I stood at my gun, until the Commodore was shot down, when he ordered us to retreat," Ball bravely recounted.

One of the best eyewitness accounts of what happened at the White House in the hours immediately before the British invasion came from Paul Jennings, a teenage slave to President Madison.

Jennings was the last occupant to leave the White House before the British arrived to burn it. He contained the fires in the kitchen to avoid accidentally catching the house on fire—an irony under the circumstances.

Taking refuge at the house of a Methodist minister, Jennings was listening to a prayer when "I heard a tremendous explosion, and, rushing out, saw that the public buildings, Navy Yard, ropewalks were on fire." Years later Jennings secured his freedom.

Michelle Obama brought up the issue of slaves building the White House to make a point about the generations "who kept on striving and hoping and doing what needed to be done." She continued, "I watch my daughters, two beautiful, intelligent, black young women playing with their dogs on the White House lawn."

Race relations have been strained and, at times, grievously violent in recent years. A July 2016 Pew Research Center study showed that 63% of registered voters consider race and ethnic relations to be a top issue in the 2016 presidential election.

Often a factor in racial tension is the difficulty of reconciling the wrongs of the past with the positive aspects of America’s history. Fully aware of recent racial tension, U.S. Senator Cory Booker (D-NJ), an African-American, eloquently and optimistically reconciled history with hope in his address to the 2016 Democratic National Convention.

Slavery was a cultural cancer that metastasized over generations. While slavery is a painful part of our nation's past, Americans can appreciate the values and principles of independence that led to ending it as Booker relayed.

"But those facts and ugly parts of our history don’t distract from our nation’s greatness. In fact, I believe we are an even greater nation, not because we started perfect, but because every generation has successfully labored to make us a more perfect union," he said.

Booker has one of the best perspectives on reconciling the tension between the evils of slavery and the improvements made since then.

By doing so Lincoln helped to free enslaved people, purging the cultural cancer that had plagued America and purifying independence in the process. The White House can rightfully be seen as a symbol of independence and emancipation.