Mail-in Voting Part I: The End of America’s Election Legitimacy

James McCoy
|
Posted: Aug 20, 2020 12:01 AM
Share   Tweet
The opinions expressed by columnists are their own and do not necessarily represent the views of Townhall.com. 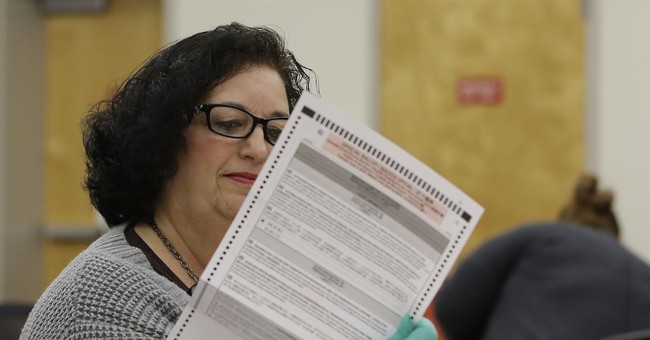 Editor's Note: This piece was coauthored by Loyd Pettegrew.

Fair elections and a legitimate voting process are at the very heart of a representative democracy. Thomas Jefferson noted, “Governments are instituted among men deriving their just powers from the consent of the governed.” The manner by which this consent is established is absolutely critical to the legitimacy of any government.

In the Federalist 10, James Madison, understanding the dangers of a democracy, said “A republic, by which I mean a government in which the scheme of representation takes place, opens a different prospect, and promises the cure [for special interests] for which we are seeking.” The two great points of difference between a democracy and a republic are: 1) the delegation of the government to a small number of citizens elected by the rest; 2) the greater number of citizens over which should be extended through its national consent, despite the inherent difficulty in obtaining it. “The right of suffrage is a fundamental Article in Republican Constitutions. The regulation of it is, at the same time, a task of peculiar delicacy.”

The meaning and importance of this “peculiar delicacy” has never been so compromised as what is proposed for the 2020 elections. Before 1890, elections in the United States were haphazardly structured and supervised, often without integrity, by local entities. Early in our history, partisan newspapers would publish filled-in ballots and members of special interest groups would cut out the ballots and place them in the ballot box for those interests.

During the presidential election of 1884 where Grover Cleveland defeated James Blaine, most states had adopted and utilized the secret balloting procedure, also known as the Australian or Massachusetts ballot. The secret ballot quickly became commonplace throughout all of the United States and the symbol of integrity in the voting process.  The secret ballot has traditionally been viewed as having four components: 1) An official ballot printed at public expense; 2) on which the names of all nominated candidates appeared; 3) being distributed only at the polling place; 4) being marked in secret and surrendered directly by the voter at the polling place.

The secret ballot quickly became the gold-standard of fair and honest elections in all democracies around the world. It contrasted sharply with elections in dictatorships and communist countries where despots or the ruling parties always used their power to intimidate voters and opposition candidates.

Recently a panel of federal judges in the 7th Circuit Court of Appeals ruled unanimously that Wisconsin's voting laws allowing voters to have absentee ballots emailed or faxed to them were not secure and therefore illegal. No single act in a democracy is more important or essential to our republic’s well-being than a trustworthy voting process.

It is critical that those voting in U.S. elections are bona fide citizens of this country.  Voting is a fundamental right of citizenship. It is therefore important to know that each voter-citizen meets the legally established requirements for voting. The U.S. Census Bureau lists the number of voting-aged citizens as 233,565,291. This group has become much more mobile over the past decade and consequently, state and local voter rolls records are hopelessly out of date and inaccurate. Add to this activist groups that endeavor to have their progressive programs implemented by getting ballots to non-voters (convicted felons, non-citizens, and even the deceased) who support their causes.

In an attempt to mitigate this reliability deficit, some states have tried to assure proper voter citizenship and eligibility by requiring photo IDs. As of 2016, 33 states have enacted some form of voter ID requirement, but these efforts have been overturned by activist judges. For example, North Carolina, Wisconsin and North Dakota voter ID laws have been attacked successfully by progressive lawsuits being struck down or amended on the basis that they are discriminatory, intending to reduce voting by traditionally Democrat constituencies. As in the North Dakota case, where it was argued that requiring a photo ID discriminated against native Americans, it is important to note that a photo ID is unequivocally required for all air travel, airport security and cashing personal or government checks, even by Native Americans. Should we believe that voting integrity in America is less important to our nation than banking or air travel safety? Voting integrity may be the single most important act of citizens in our democracy.

Enacting the political action mantra of the Obama administration’s chief of staff Rahm Emanuel, “You never want a serious crisis to go to waste,” Democrats are ferociously using the Covid 19 pandemic and U.S. Postal financial crisis to justify and promote universal mail-in balloting in the 2020 election. Mail-in balloting and its balloting doppelganger, ballot harvesting, would encourage the same anarchical forces propelling the BLM and Antifa protests and riots assaulting the cities, private businesses and homes of the American electorate.

An example of Democrats' new voting plan can be seen in California. Very few people in what once was known as “the Golden State,” now Mexifornia to use Victor Davis Hanson’s words, took notice when far left Governor Jerry Brown signed changes in AB1921, allowing ballot harvesting three years ago. As a result, California lost half of its Republican House seats in the 2016 election. In 2016 Orange County was the state’s only reliably red county but turned all blue after Democrats found hundreds of thousands of ballots post-election day. Republicans like Mimi Walters, Dana Rohrabacher and Young Kim were ahead on election night only to lose their races after late ballots were counted. The number of mail-in ballots counted in Orange County were unprecedented -- a whopping 250,000 new ballots were produced from the “ballot harvesting” law.

The state’s Progressive-in-Chief, Gavin Newsom has given the rest of the country a preview via executive order of how mail-in voting will work for Democrats. All ballots will be mailed to registered voters in 2020. One of us applied online to vote using residence information from his childhood and proceeded easily through the system.

We conclude that all four of the aforementioned secret ballot criteria would be subject to compromise or total eradication. Instead of having the vote as a safe and private act of conscience, outside pressures from vested interests would oversee and guide the act of casting American’s vote. The left wants nothing more than to embrace the “vote early, vote often,” and “vote the way we tell you to vote.” This is the most accurate description of mail-in voting. The objectivity of the “peculiar delicacy” of honest and fair elections will be forever lost. Such a cost is unacceptable to our republic.