Tuesday’s comments by Federal Reserve Chairman Ben Bernanke and conventional technical analysis suggest that gold may be poised for a rally. On Wednesday, Bernanke will complete his testimony before Washington lawmakers where he may offer more insight into the state of the U.S. economy. His words could generate the momentum the gold market needs to breakout to the upside.

On Tuesday, Bernanke presented a gloomy assessment of the U.S. economy that may have provided clues for investors that the Fed is poised for more monetary easing. His downbeat assessment of the economy left open the door for additional quantitative easing although the Chairman did not outline any specific stimulus plans.

In his testimony, Bernanke did not give any clear signals as to the Fed’s intentions. At times it seemed he was reiterating the statement generated by the Fed monetary policymakers at its June meeting. Nonetheless, the U.S. Dollar softened a bit and gold rallied which could be a precursor of events to come.

If additional quantitative easing is implemented, the dollar should weaken further, giving gold the boost it will need to breakout to the upside. QE is categorized as a dollar-negative move because it floods the market with currency. 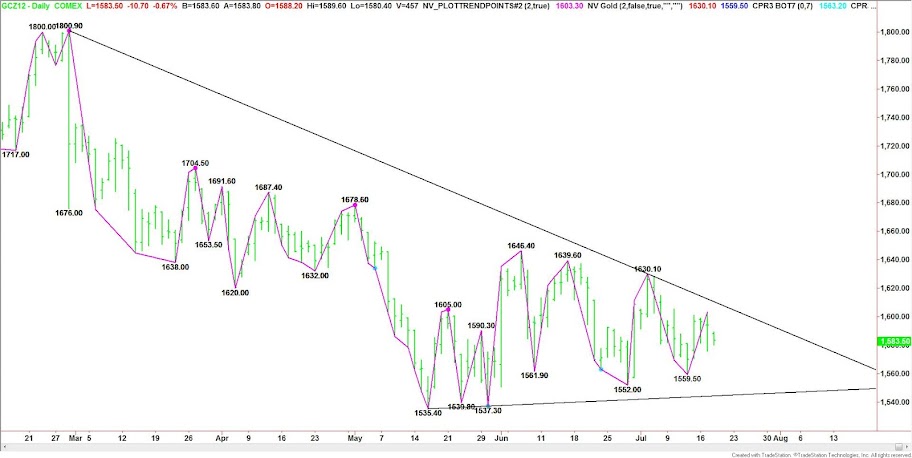 The highlight of this pattern is the compression of prices by the combination of the flat support line and the gradually declining resistance line. This chart pattern is often indicative of impending volatility so investors should brace themselves for a potentially volatile breakout over the near-term.

What will be the catalyst of this potentially volatile move?

Since gold is considered a store of value during economic turmoil, investors may return to it as a safe haven investment as the reality of another recession becomes clearer. Lately, investors have been treating gold as both an investment and a reserve currency.

So while investors have been buying gold on the dips and selling it on the rallies, keeping it inside of a tight trading range, the market may be set up to finally break through resistance if there is a good story behind the rally to support further upside action. This story may be related to gold’s value as a reserve currency which ties its next potential move directly to its relationship with the dollar.

While short-term traders may have been listening to Bernanke for news to spark a sharp rally in the equity indices, others may have picked up on his warning of another recession if Congress doesn’t reach an agreement soon to avert a budget crisis. Talk of another recession may be what gold investors wanted to hear since it creates uncertainty that could encourage investors to flock into gold as a safe haven investment.

Bernanke went on with additional warnings that without an agreement, higher taxes and deep austerity measures would take effect at year’s end. He also cited the Congressional Budget Office’s warning that a recession would occur in 2013 and jobs could be lost.

Gold speculators are not going to wait for the recession to start before taking action. Based on the developing fundamental story and the current daily chart pattern, these investors may be gearing up to strike as soon as the Fed signals that additional QE is imminent.

A Group Of Parents Sent Their Kids' Face Masks To A Lab For Analysis. Here's What They Found
Townhall
WATCH: Hot mic catches journos joking about their questions to Biden
Twitchy
Vladimir Putin Asks NBC News Who Ordered the Assassination of Ashli Babbitt by the Capitol Police
Redstate
The Morning Briefing: The Chrissy Teigen Cancel Choir Is Singing a Beautiful Tune
PJ Media