James Gottry
|
Posted: Nov 19, 2019 12:01 AM
Share   Tweet
The opinions expressed by columnists are their own and do not necessarily represent the views of Townhall.com. 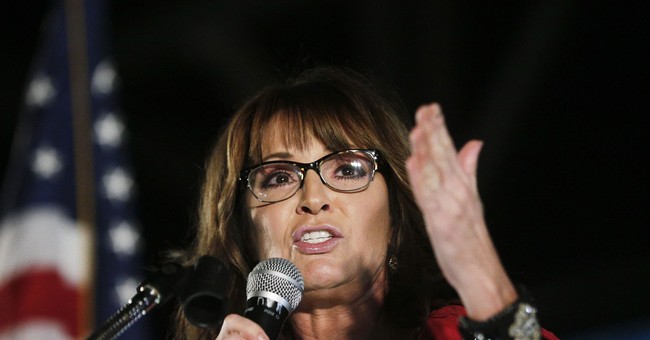 It’s been over a decade since she first burst onto the national scene, telling the world that the only difference between a hockey mom and a pit bull is lipstick, and reminding us that “a small-town mayor is sort of like a community organizer, except that you have actual responsibilities.”

The point is, Sarah Palin remains a household name, and she has never been afraid to speak her mind. Because of this, when the former Alaska governor and 2008 vice presidential candidate appeared recently on Dr. James Dobson’s Family Talk, the media came like a moth to a flame. But they honed in on one specific part of her interview: the state of her marriage.

They missed – or ignored – a very important part of the conversation.

Palin and Dr. Dobson talked about her beautiful son, Trig. Sarah described him as “amazing” and “the best thing that ever happened to me.”  She said Trig “teaches me every single day about what's important,” and expressed shock “that people would want to snub life out of him and not give him or other children with these challenges a chance.”

That’s right, I forgot to mention… Trig has Down syndrome. If you have met someone affected by this disability, then you – like Palin – know how special they are. But children like Trig are disappearing from the earth because of an avoidable tragedy: abortion.

When an expectant mother receives this diagnosis for her child, she is often pressured to have an abortion. And that pressure is having results. In the United States, approximately 70 percent of women choose to abort their unborn children diagnosed with Down syndrome. In Iceland, the number is nearly 100 percent, and other countries have similarly high rates.

Like many “worst-kept secrets,” far too few people are talking about this ugly reality.

Why do we abort babies with Down syndrome? Because they're different? Because they face some unique medical challenges? Because there are neurological complications?

Countless children are born every single day who are “different” (best I can tell, just about all of them). Many children – and adults – face medical challenges. And a fair number of them face neurological complications.

Should we exterminate them all? (Hint: It shouldn’t be difficult to formulate a definitive answer to this question.)

Recognizing the severity of this crisis, a group of U.S. senators have introduced a bill that would “prohibit discrimination by abortion against an unborn child on the basis of Down syndrome.” (Notably, not one Democrat joined in sponsoring the Senate bill.) As co-sponsor U.S. Sen. Jim Inhofe said, “to deny a child the chance at life because of his or her chromosome count is a heinous effort to eliminate a vibrant community through abortion.”

All details aside, this is our tragic reality. Abortion is being used as a high-tech eugenics device – an effort to “improve” the human race by systematically eliminating the most vulnerable among us.

As a society, we need to answer one question: Is life sacred, or is it not?

And if it is sacred, we need to do something about it. We need to stand up for these precious children and support politicians who are willing to stand for life.

Or, in the words of Sarah Palin: “Buck up or stay in the truck.”