Democrats Hate Amy Coney Barrett Because They Hate the Constitution

State Rep. Jake Hoffman
|
Posted: Oct 04, 2020 12:01 AM
Share   Tweet
The opinions expressed by columnists are their own and do not necessarily represent the views of Townhall.com. 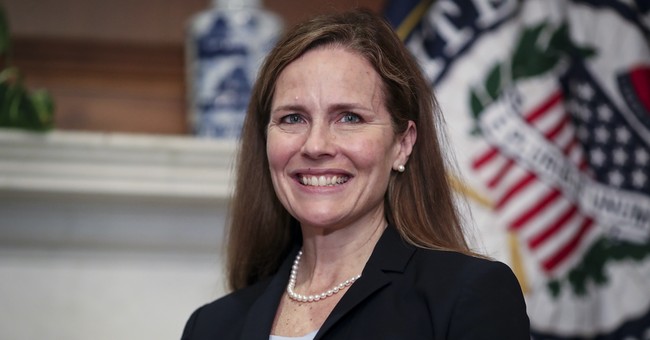 President Trump has nominated a recognized legal scholar, and a respected judge, to be the next Supreme Court Justice of the United States: Amy Coney Barrett. Judge Barrett is also a mother of seven children, two of whom are adopted. In her public appearances she seems to have a pleasant personality. Yet Democrats hate her. One has to wonder why.

Judge Barrett has openly acknowledged that the late Supreme Court Justice Antonin Scalia was her mentor: she served as a clerk to Justice Scalia at the Supreme Court 20 years ago. Barrett says that she “shares his judicial philosophy.” What is that philosophy? It is called “originalism.”

Originalists have the legal view that justices should adhere as closely as possible to the original text of the U.S. Constitution. They believe judges have a responsibility to refrain from letting their personally held ideological, political or religious beliefs influence their opinions on cases brought before their Court. Arguably, most importantly, originalists are ardently against the judicial branch attempting to legislate from the bench.

If we look at the current positions of the modern Democratic Party, it is clear that they do not share Amy Coney Barrett’s originalist point of view. In fact, their current rhetoric demonstrates that they are far beyond merely despising the philosophy of originalism. Instead, they are actively working to radically and fundamentally transform the Constitution into an unrecognizable monstrosity.

Democrats nationally are advocating for the elimination of the Electoral College—the system in our nation’s Constitution that makes the presidential election based on winning statewide elections, or Congressional Districts, rather than on the outcome of a national popular vote. The Electoral College ensures that all states have a say in who becomes president rather than simply the most populace states or cities. It was designed deliberately and brilliantly to guarantee that our states have at least as much importance as the federal government. This delegation of power to the states is viewed by Democrats as an annoyance in their quest for centralizing power amongst the leftist coastal “elites” and the ruling class in Washington, D.C.

No surprise to the American people, I’m sure, but Democrats have been openly and repeatedly attempting to eliminate, or at the very least significantly scale back your Second Amendment right to keep and bear arms. Former Democratic presidential candidate Robert Francis “Beto” O’Rourke said “… hell, yes, we’re going to take your AR-15.” Years ago this would have been shunned by Democrats as unreasonable, and too radical a break from the Constitution. Now, Joe Biden, has said O’Rourke will help develop his gun policies, if elected.

Democrats used to be champions of the First Amendment, yet have now fully embraced “cancel culture.” If someone dares disagree with current left-wing dogma they are attacked on social media and their livelihood or even their very lives are threatened. Violent mobs threaten speakers with “dissenting” views for even attempting to present a counter narrative on a university campus. Riotous mobs on the street ambush peaceful Americans having dinner in restaurants, demanding they comply with the anti-American groupthink of the day or risk being cancelled, vilified, and, in many cases, physically threatened.

You see, Democrats have come out of the shadows. They’ve shed their fear of ostracization for hating our country, what it stands for, and our divinely inspired founding documents. They now proudly and openly embrace socialism, communism, and centralized, one-party totalitarian control.

The Democrats hate Amy Coney Barrett because they hate the Constitution. They hate the separation of powers, states’ rights, checks and balances, and the inalienable rights that the Constitution prohibits them from trampling. They hate Judge Barrett because she is committed to adhering to the U.S. Constitution and adhering to it as written, demonstrating a profound respect and love for our country and understanding that the document was intentionally written to limit the federal government’s power over the American people.

With policies like the Green New Deal, gun control, laws designed to hamstring our local law enforcement, and the nationalization of our education system being pushed by Democrats, America needs more Constitution, not less.   America needs more judges with an originalist philosophy who will faithfully uphold the Constitution without regard for their own personal ideology. America needs a Justice Amy Coney Barrett on the Supreme Court.

Jake Hoffman is a contributing columnist at Townhall, the President and CEO of Rally Forge, one of the nation’s top conservative digital communications and media strategy firms, and an elected official in Arizona. Follow him on Facebook and Twitter.