Jacob Sullum
|
Posted: Jun 16, 2021 12:01 AM
Share   Tweet
The opinions expressed by columnists are their own and do not necessarily represent the views of Townhall.com. 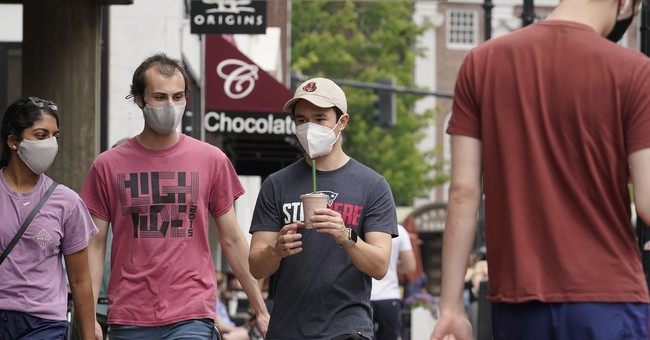 Pennsylvania legislators last week officially ended the state's COVID-19 "disaster emergency," which Gov. Tom Wolf repeatedly extended after declaring it 15 months ago. While the immediate practical effect of the legislature's vote will be minimal, it exemplifies an important step toward reining in the vast powers that Wolf and other governors have exercised during the pandemic.

The Pennsylvania resolution was authorized by a constitutional amendment that voters approved last month, which changed the requirement for terminating a state of emergency from a two-thirds vote to a simple majority. Voters also passed an amendment that reduces the length of future emergency declarations from 90 days to 21 days and requires the legislature's approval to extend them.

The election results and last week's resolution amount to a sharp rebuke of the Democratic governor's pandemic response, which a federal judge described as "shockingly arbitrary" and unconstitutional. The goal of the new limits, according to the state Senate's Republican leaders, is "re-establishing the balance of power between three equal branches of government as guaranteed by the constitution."

Pennsylvania's governor has very broad powers once he declares a "disaster emergency." Among other things, he can suspend statutes and regulations, commandeer private property, issue evacuation orders, and "control ingress and egress to and from a disaster area, the movement of persons within the area and the occupancy of premises therein."

Wolf relied on that last power when he closed all K-12 schools and all "non-life-sustaining" businesses. He also cited it when he ordered Pennsylvanians to stay home "except as needed to access, support, or provide life sustaining business, emergency, or government services."

By last week, Wolf had lifted nearly all of his COVID-19 restrictions, and he argues that the constitutional amendments won't affect the legality of future responses to public health threats. In addition to his own emergency powers, he notes, the state Department of Health has a "duty" to "determine and employ the most efficient and practical means for the prevention and suppression of disease."

On its face, that power is even broader than Wolf's, authorizing any measure that the secretary of health considers appropriate. A bill that state legislators are considering would limit the secretary's amazingly wide discretion, saying the health department may not close businesses, issue stay-at-home orders, restrict travel or mandate a "specific hygienic practice" such as mask-wearing or physical distancing except in cases where people have been "exposed or potentially exposed to a contagious disease."

State Sen. Judy Ward, R-Altoona, who introduced that provision, wants to require legislative approval of such far-reaching policy decisions, which she said "should not be made in a vacuum by someone who was not elected by the people." According to Ward, her amendment "simply prevents one person from unilaterally throwing tens of thousands of citizens out of work, barring children from school, and spending millions of taxpayer dollars."

Legislators in many other states -- including, in some cases, legislators from the same political party as their governor -- have similar concerns. USA Today reports that "lawmakers in 46 states, Guam and Puerto Rico have drafted 300 proposals this year to curtail their governors' executive powers." Such limits already have been enacted in several states, including New York, Florida and Kentucky.

The impulse behind such legislation is understandable once you consider the vague, sweeping language of the statutes that were invoked during the COVID-19 crisis. After declaring an emergency, for instance, California's governor can exercise "all police power vested in the state"; Michigan's governor can "promulgate reasonable orders, rules and regulations as he or she considers necessary to protect life and property"; and Nevada's governor assumes whatever "functions, powers and duties" he thinks are "necessary to promote and secure the safety and protection of the civilian population."

Legislators gave governors the ability to unilaterally, dramatically and indefinitely magnify their own powers, trusting them not to abuse that authority. The experience of the last year and a half suggests that trust may have been misplaced.