Another Looming Threat to E-Cigarettes

Jacob Sullum
|
Posted: Nov 20, 2019 12:01 AM
Share   Tweet
The opinions expressed by columnists are their own and do not necessarily represent the views of Townhall.com. 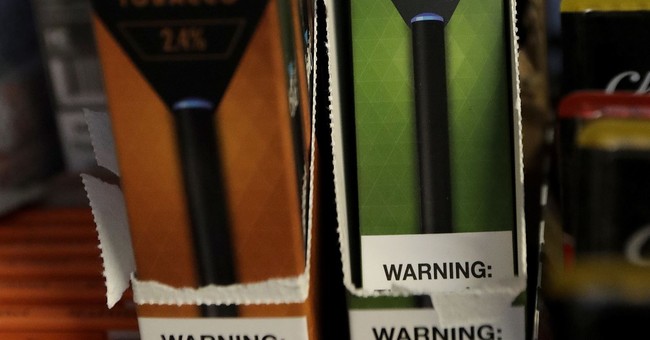 President Donald Trump reportedly has reconsidered a plan to ban flavored e-cigarettes, a reversal that was widely portrayed as a triumph of politics over public health. Yet that criticism more aptly describes the proposed ban, which would have sacrificed the interests -- and potentially the lives -- of current and former smokers in the name of curtailing underage vaping.

There were political arguments on both sides of this debate. Advocates of the flavor ban argued it would appeal to suburban women concerned about the recent rise in e-cigarette use by teenagers, while opponents warned that it would alienate vapers who were otherwise inclined to support the president, endangering his reelection.

The opponents, bolstered by rallies and polling data suggesting that vapers were highly motivated and apt to vote (or refrain from voting) based on this issue, seem to have prevailed. But they not only had the stronger political argument; they also had the stronger public health argument.

Millions of Americans have quit smoking by switching to vaping, a far less hazardous source of nicotine. Consumer surveys and sales data show they overwhelmingly prefer the products targeted by the proposed ban.

That policy, which was expressly designed to make vaping products less appealing, would have driven some former smokers back to their old habits while deterring current smokers from making a switch that could save their lives. Even The New York Times saw the folly of this approach, warning that it "would almost certainly force people who already use these products, including roughly 11 million adults, to choose between traditional cigarettes (which remain widely available, despite being deadlier than e-cigarettes) and black-market vaping products."

For the time being, the vaping industry, including thousands of mom-and-pop shops across the country, seems to have dodged a bullet. But it still faces the looming threat of federal regulations that are expected to drive most businesses and products from the market.

Under a 2016 rule, manufacturers, which include vape shops that mix their own e-liquids, have to persuade the FDA that allowing sales of their products is "appropriate for the protection of public health." Although it's still not clear exactly what that means, vaping businesses must submit a "premarket tobacco application" (PMTA) for each of their products by May 12 -- less than six months from now.

A PMTA is required for every product variation. The FDA puts the "average cost" at $132,000 for e-liquids and $467,000 for devices, although it says some applications could cost more than $2 million.

Either way, those costs are likely to deter all but the largest vaping companies. The FDA itself predicts that "54 percent of delivery systems and somewhere between 50 and 87.5 percent of e-liquids" will "exit the market" before the application deadline.

If a business manages to file adequate applications in time, it will be allowed to keep those products on the market for up to a year while the FDA decides whether to approve them. But even at this late date, the requirements for approval remain opaque, as a lawsuit filed last month by a coalition of small vaping companies points out.

The FDA, for instance, demands "sufficient information regarding the potential abuse liability" of each product and suggests it would be satisfied with "a double-blind, placebo-controlled, within-subject study comparing several doses of a new product to a comparator product with a known abuse liability." It's not clear whether anything short of that prohibitively expensive option would suffice. And while manufacturers are supposed to list "harmful or potentially harmful constituents," the FDA still has not fully specified what those are.

"Our next focus will be on ensuring that the Trump administration recognizes the need to reform the FDA's regulatory system for these products," says Gregory Conley, president of the American Vaping Association, an advocacy group that supports vaping as a harm-reducing alternative to smoking. "If President Trump wants to win in 2020, mere inaction on this issue is not enough."