Jacob Sullum
|
Posted: Feb 08, 2017 12:01 AM
Share   Tweet
The opinions expressed by columnists are their own and do not necessarily represent the views of Townhall.com. 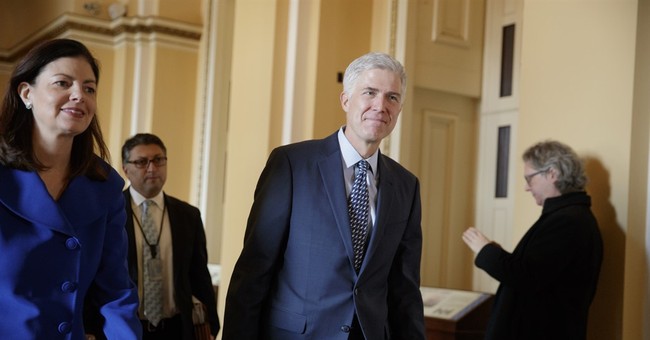 Trending
Donald Trump's Twitter temper tantrum over the legal challenge to his immigration order suggests he does not appreciate the role of an independent judiciary. Fortunately, Trump's lack of interest in such matters has given us a Supreme Court nominee who takes that role seriously and can be expected to resist presidential power grabs.

Last Friday, James Robart, a federal judge in Seattle, issued a temporary restraining order that blocked enforcement of Trump's 90-day ban on travelers from seven Muslim-majority countries and 120-day suspension of the U.S. Refugee Admissions Program. The next morning, Trump slammed Robart on Twitter: "The opinion of this so-called judge, which essentially takes law-enforcement away from our country, is ridiculous and will be overturned!"

Trump followed that up on Sunday with a tweet that castigated Robart for exposing Americans to the risk of a terrorist attack: "Just cannot believe a judge would put our country in such peril. If something happens blame him and court system. People pouring in. Bad!"

It is hardly surprising that a president would disagree with a ruling that stops him from doing what he wants to do. But by condemning a "so-called judge" and the "court system" for daring to frustrate his will, Trump cast doubt on the judicial branch's authority to do what it is supposed to do: check the other branches of government when they violate the law.

Alarmed by a president who sounds like a tin-pot dictator, Trump's critics understandably worried that his choice to replace the late Supreme Court Justice Antonin Scalia would be someone with authoritarian instincts who would bend over backward to accommodate the president's agenda. But judging from his record on the U.S. Court of Appeals for the 10th Circuit, Neil Gorsuch is not that guy.

The same progressives who claim Gorsuch would be a "rubber stamp" for Trump are troubled by his criticism of the Chevron doctrine, which says judges should defer to bureaucrats' interpretations of the laws they enforce. But Gorsuch's skepticism of that principle, which is based on his respect for the separation of powers, shows he is not shy about challenging the executive branch when it exceeds its bounds.

Gorsuch's concern about overweening executive power is illustrated by two 2016 opinions in which he rejected the retroactive application of an agency's legal interpretation. One case involved an unauthorized immigrant seeking legalization, the other a home health service provider whose Medicare reimbursements were deemed improper based on regulations announced years after the claims were filed.

Gorsuch, like Scalia, is a critic of vague criminal statutes and a stickler when it comes to requiring that prosecutors prove all the elements of an offense. Both tendencies are apparent in a 2015 opinion that overturned the Analogue Act convictions of two convenience store owners because the government had not proved they knew enough about the psychoactive "incense" they sold to be guilty of violating that law.

Gorsuch's respect for the zone of privacy protected by the Fourth Amendment is also reminiscent of Scalia. Last year, dissenting from a 10th Circuit ruling that allowed police officers to ignore multiple "No Trespassing" signs on the property of a suspected drug dealer, Gorsuch faulted his colleagues for endorsing "an irrevocable right to enter a home's curtilage to conduct a knock and talk."

In another 2016 decision that surely would offend Trump's "law and order" sensibilities, Gorsuch sided with a man convicted of possessing child pornography. His majority opinion agreed that the National Center for Missing and Exploited Children qualifies as a governmental actor under the Fourth Amendment, meaning its warrantless search of the defendant's email was presumptively unconstitutional.

Why would Trump pick a Supreme Court justice with the backbone to oppose his excesses? By most accounts, he farmed out the selection process to the Federalist Society and the Heritage Foundation as a sop to conservatives. Perhaps he did not realize that a conservative might try to conserve the Constitution.