Jacob Sullum
|
Posted: Oct 19, 2016 12:01 AM
Share   Tweet
The opinions expressed by columnists are their own and do not necessarily represent the views of Townhall.com. 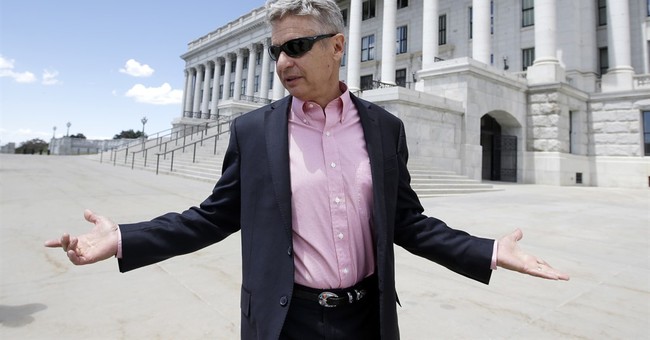 Trending
One of the few appealing aspects of Donald Trump's presidential campaign has been his criticism of Hillary Clinton's reckless interventionism. But the bellicose billionaire combines that criticism with promises of a gratuitous military buildup, a casual attitude toward the use of American weapons and a disturbing tendency to view trade and immigration as acts of war.

To get a sense of what a more disciplined, consistent and thoughtful critique of Clintonian warmongering sounds like, listen to Gary Johnson, the Libertarian nominee for president. Notwithstanding the popular portrayal of Johnson as a foreign policy ignoramus based on his embarrassing "Aleppo moments," the former New Mexico governor offers a bracing alternative to Clinton's supposedly sophisticated yet consistently careless embrace of violence as a tool for reshaping the world.

Again and again as first lady, senator and secretary of state, from Serbia to Syria, Clinton has supported military interventions that had nothing to do with national defense. Mindful of the damage done by the promiscuous use of America's armed forces, Johnson promises a different approach: When in doubt, stay out.

"As president," Johnson said in a recent speech at the University of Chicago, "I would not need to be talked out of dropping bombs and sending young men and women into harm's way. I would be the president who would have to be convinced it is absolutely necessary to protect the American people or clear U.S. interests. I will be the skeptic in the room."

Like Trump, Johnson bemoans the disastrous consequences, in squandered lives and resources as well as instability conducive to terrorism, of the Clinton-supported war in Iraq. The fact that Clinton voted for that war and took more than a decade to admit it was a mistake -- a mistake from which she apparently learned nothing, given her subsequent support for regime change in Libya and Syria -- demonstrates that foreign policy knowledge is not synonymous with wisdom.

Johnson's criticism of unnecessary foreign entanglements goes beyond Trump's by highlighting the folly of the never-ending war in Afghanistan. "We were attacked, and we attacked back," he says. "But seven months after we sent our troops to Afghanistan, al-Qaida had scattered to the winds and the Taliban had been removed from power. Al-Qaida was gone, but we stayed." Fourteen years later, thousands of U.S. troops remain in Afghanistan.

Unlike Trump, Johnson does not think the U.S. government spends too little on the military. "U.S. military spending accounts for roughly one-third of total military spending of the entire world, exceeding the combined total of the next seven largest military budgets," he notes.

That bloated budget, which Johnson wants to cut, reflects and reinforces an excessively broad vision of the U.S. military's role in the world. "Our foreign policy and military actions must support clear U.S. interests," Johnson says, as opposed to "a desire to shape the world in our own image or to pick winners and losers in civil wars on the other side of the globe."

Congress encourages intervention not only by keeping so-called defense spending unjustifiably high, but by abdicating its constitutional responsibility to decide when the use of military force is appropriate. "As president," Johnson says, "I will honor the War Powers Act without hiding behind dubious legal opinions from my own lawyers."

That's a reference to President Obama's laughable arguments for waging war without congressional authorization, including claims that dropping bombs in Libya did not constitute "hostilities" and that Congress approved military action against ISIS before ISIS existed. If Hillary Clinton is elected, we can expect more such devious dissembling in the service of a crusading foreign policy that knows no limits.