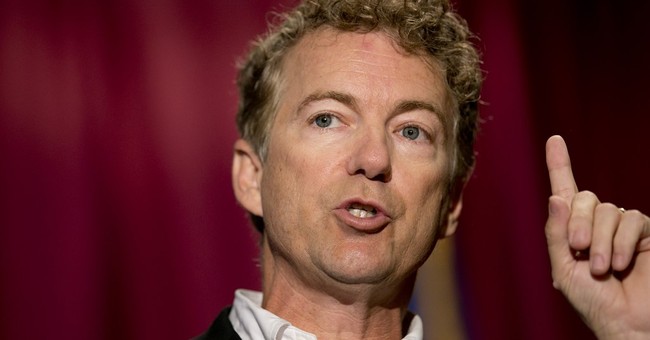 Trending
At a Q and A session in Dallas a year ago, Rand Paul expressed skepticism about whether the Islamic State in Iraq and Syria (ISIS) posed "a threat to our national security." Hours later at another event in Dallas, the Kentucky senator said that if he were president he "would lay out the reasoning of why ISIS is a threat to our national security and seek congressional authorization to destroy ISIS militarily."

Paul's sudden conversion on the merits of war with ISIS made me worry that, in catering to Republican primary voters, he would lose his distinctive voice on foreign policy, which urges caution and modesty instead of the heedless interventionism advocated by his rivals. But last week's Republican presidential debate showed that Paul still offers a desperately needed alternative to the mindless militarism favored by the GOP.

"We have a world that grows increasingly dangerous," Sen. Marco Rubio of Florida declared, "and we are eviscerating our military spending." It is so eviscerated that the U.S. spends more on the military than the next seven countries combined.

Former Hewlett-Packard CEO Carly Fiorina, former Florida Gov. Jeb Bush and retired neurosurgeon Ben Carson nevertheless agreed with Rubio that U.S. military spending is dangerously low. "We need the strongest military on the face of the planet," Fiorina said, "and everyone has to know it." Although we and they already do, Fiorina still wants to boost spending on the Army, Navy and Marines.

Bush upped the ante. "If we're going to lead the world," he said, "then we need to have the strongest military possible." Strictly speaking, that means diverting virtually all resources to military spending, leaving Americans just enough to cover the basic necessities of life.

Paul, by contrast, has proposed a five-year budget-balancing plan that includes $164 billion in Pentagon cuts. Although he later seemed to retreat from that proposal, it is hard to imagine him complaining that $610 billion, about a fifth of all federal spending, is not enough to defend the country.

During the debate, Paul was the only candidate to consistently ask whether the activity funded by that enormous budget actually makes the country safer. "We have to learn (that) sometimes the interventions backfire," he said. "The Iraq War backfired and did not help us. We're still paying the repercussions of a bad decision."

According to Bush and Rubio, however, the mistake was not so much starting that war as ending it. "We politically and militarily pulled back," Bush said, "and now we have the creation of ISIS."

Paul's analysis starts earlier, with the colossal error that George W. Bush made -- an error his brother is still reluctant to acknowledge. Paul persuasively argues that deposing Saddam Hussein, based on an utterly spurious national security argument, strengthened Iran and created the conditions that gave rise to ISIS.

Paul warns that the failure to contemplate the possibility of such unintended consequences ensures there will be more of them. "ISIS would be in charge of Syria had we bombed Assad," he said. "Sometimes both sides of the civil war are evil, and sometimes intervention makes us less safe. ... Every time we have toppled a secular dictator, we have gotten chaos, the rise of radical Islam, and we're more at risk.

Paul is not your man if you want a president who doubles down on reckless wars, trying to correct the problems created by earlier interventions. "If you want boots on the ground, and you want them to be our sons and daughters, you've got 14 other choices," he said. "There will always be a Bush or Clinton for you, if you want to go back to war in Iraq."