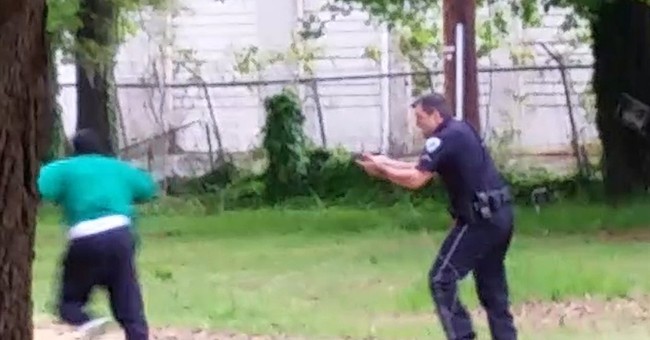 Trending
Even before it became clear that Feidin Santana was witnessing what local authorities now describe as a murder, it took guts for him to record the police encounter that ended in Walter Scott's death. Santana, who was walking to work at a barbershop in North Charleston, S.C., the day before Easter, risked illegal retaliation by camera-shy cops the moment he stopped talking on his smartphone and started using it to capture Scott's interaction with patrolman Michael Slager.

Although the First Amendment right to record the police as they perform their duties in public is well established, cops often violate that right by ordering people to turn off their cameras, confiscating their cellphones or arresting them on trumped-up charges. The shooting of Scott, which last week led to Slager's arrest thanks to the details revealed by Santana's video, illustrates both the prevalence of this contempt for constitutional rights and the importance of counteracting it.

After Scott fell to the ground, struck by five of the eight rounds that Slager fired at him as he fled a traffic stop, Santana continued recording. "One of the officers told me to stop," Santana told CNN. "It was because I say to them that what they did, it was an abuse, and I witnessed everything."

The New York Times reports that when Scott's older brother, Anthony, arrived at the crime scene and took pictures of the body, three officers "surrounded him, telling him to turn over his phone." He gave it to them. "Hours later," the Times says, North Charleston Police Chief Eddie Driggers "arrived, returned Mr. Scott's phone and offered his condolences."

As Driggers seemed to recognize, there is no legal basis for such interference with camera-carrying bystanders. The right to record police has been explicitly upheld by at least four federal appeals courts -- in the 1st, 7th, 9th and 11th circuits -- and implicitly recognized by others.

Federal judges outside of those four circuits have ruled that the right to record flows logically from the First Amendment right to gather information and that it applies equally to everyone, not just credentialed journalists. Big-city police chiefs take it for granted that "members of the public are legally allowed to record police interactions," as a 2014 NYPD memo put it, and that "a bystander has the same right to take photographs or make recordings as a member of the media," as Washington, D.C., Police Chief Cathy Lanier informed her officers in 2012.

The behavior of North Charleston police after the shooting of Scott suggests why such memos are necessary. So do the actions of the officers who arrested Austin, Texas, activist Antonio Buehler three times in 2012 for daring to record police encounters.

Last July, responding to a lawsuit filed by Buehler, a federal judge ruled that the right he was exercising is well enough established that police cannot rely on qualified immunity to escape liability for violating it. U.S. Magistrate Judge Mark Lane cited "a robust consensus of circuit courts" that "the First Amendment encompasses a right to record public officials as they perform their official duties."

Even the threat of personal liability may not be enough to deter cops from harassing people who record them, because taxpayers typically pick up the tab when cities settle lawsuits arising from such incidents. Last year, for instance, New York City paid $125,000 to settle a lawsuit brought by Brooklyn resident Dick George, who said police roughed him up and arrested him for disorderly conduct after he recorded a stop-and-frisk encounter in 2012.

According to George's complaint, one of the cops said, "Now we are going to give you what you deserve for meddling in our business, and when we finish with you, you can sue the city for $5 million and get rich. We don't care."

Anthony Scott encountered a similar attitude when the cops took his cellphone. "It was eerie how they were acting," he told the Times. "They were cocky."