Smoke a Joint, Lose Your Country 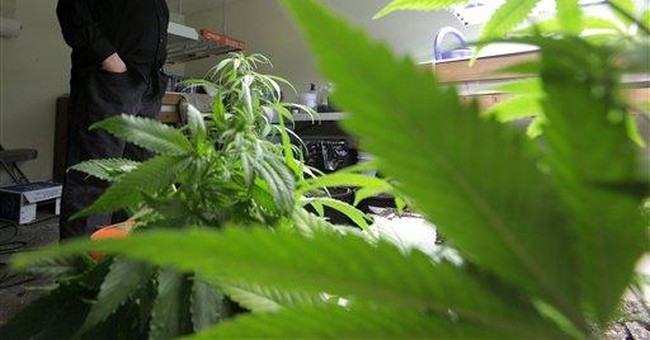 Under U.S. law, a legal resident who commits an "aggravated felony" is automatically deported. But a crime need not be aggravated or a felony to qualify: As several groups that defend immigrants' rights note in a recent Supreme Court brief, the category has been interpreted to include minor offenses such as selling a $10 bag of marijuana, selling counterfeit clothing, stealing a $10 video game, shoplifting baby clothes worth $15, forging a $20 check and pulling another woman's hair in a fight over a boyfriend.

The immigration consequences of criminal convictions are especially disproportionate in drug cases, where suspicion of foreigners converges with fear of the intoxicants historically linked to them. As two recent Supreme Court cases illustrate, this combination can result in prolonged detention and lifelong banishment of people who have lived here for decades, separating them from their jobs, their families and their communities, all for victimless crimes.

A noncitizen is deportable if he is convicted of any drug law violation except for "a single offense involving possession for one's own use of 30 grams (about an ounce) or less of marijuana."

In a case the Supreme Court decided last week, a Kentucky truck driver named Jose Padilla (not to be confused with the American citizen convicted of assisting terrorism) pleaded guilty to transporting marijuana.

Padilla, a Vietnam War veteran from Honduras, did not realize the plea meant he would have to leave the country he had called home for more than 40 years. Because his attorney wrongly assured him he would not be deported, the Court ruled that Padilla had been deprived of his Sixth Amendment right to "the effective assistance of competent counsel."

On the same day it announced that decision, the Court heard a case involving a Mexican immigrant, Jose Angel Carachuri-Rosendo, who became a legal U.S. resident in 1993 and more than a decade later served a 20-day sentence in a Texas jail for misdemeanor marijuana possession. The following year, he was caught with one tablet of Xanax, for which he served 10 days in jail.

According to the U.S. Court of Appeals for the 5th Circuit, these two trivial offenses added up to an "aggravated felony," which not only made Carachuri deportable but barred him from asking the attorney general for a "cancellation of removal."

The 5th Circuit's reasoning, which has been endorsed by one other federal appeals court and rejected by four, goes like this: Although Carachuri was never convicted of a felony, he theoretically could have been charged as a recidivist under federal law, which would have made him eligible for a sentence of 15 days to two years.

Another victim of such imaginary charges is Jerry Lemaine, a 28-year-old New Yorker who was born in Haiti but has lived in this country since he was 3. Caught with a joint on Long Island in 2007, Lemaine pleaded guilty and paid a $100 fine, only to be shipped off to Texas by immigration authorities. They detained him there for three years after determining that he, like Carachuri, qualified as an "aggravated felon" in the 5th Circuit (though not in the 2nd Circuit, where he was cited for the marijuana).

Lemaine, you see, had also been charged with possessing a small amount of marijuana as a teenager. Although the charge was ultimately dismissed, in the federal government's view it still made him a recidivist, which made him an aggravated felon, which made him deportable without recourse for drug violations that in New York do not even qualify as criminal offenses.

Outrages like this occur largely because Congress in 1996 eliminated judges' discretion to prevent deportation of people who do not deserve it and severely restricted the attorney general's authority to do so. Like mandatory minimum sentences, these changes were aimed at reining in misguided compassion and eliminating inappropriate disparities. And like mandatory minimums, rigid deportation rules have resulted in a different sort of injustice. Tougher is not always better.