These Boots Are Made for Talking 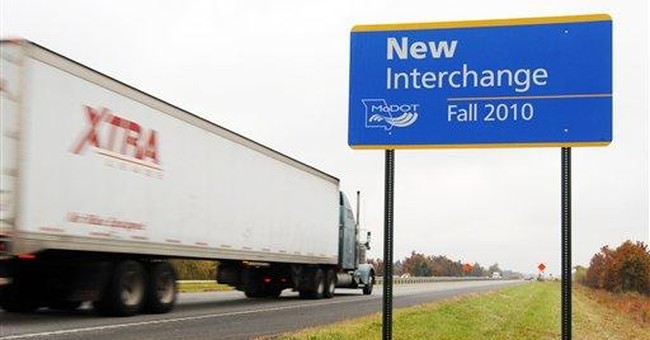 According to a report from a shoe store in Campbellsville, Ky., the Army Corps of Engineers "created or saved" nine jobs when it used money allocated by the American Recovery and Reinvestment Act to buy nine pairs of work boots.

The Wall Street Journal reports that the store's owner, frustrated by the government's confusing online forms, enlisted the help of his 42-year-old daughter, who figured nine -- the number of people who would use the boots on the job -- made as much sense as any other answer.

The economic kick supposedly delivered by those work boots is emblematic of the errors and exaggerations that pervade the job numbers proudly cited by the Obama administration as evidence that the Recovery Act is working. The highly labor-intensive boots also illustrate the goofy logic of government-goosed employment, which aims to maximize jobs and therefore prizes inefficiency.

Last month, the Obama administration bragged that $160 billion in spending authorized by the $787 billion Recovery Act had "created or saved 640,329 direct jobs" as of Sept. 30. Last week, the Government Accountability Office (GAO) reported that 58,386 of these jobs were tied to projects that had not spent any money yet. Whoops.

Meanwhile, newspapers across the country have been digging up one example after another of erroneous job numbers, including premature reporting, double counting, stray zeros, raises counted as new jobs, jobs created in congressional districts that do not exist, phantom jobs attributed to housing assistance for low-income renters and minor purchases that, like the Army Corps' boot order, are implausibly credited with creating several jobs each.

David Freddoso and Mark Hemingway of The Washington Examiner are keeping track of these reports, and as of this writing they count 90,489 jobs "not really created or saved."

The biggest source of uncertainty about these numbers is the very notion of a job "saved." While "recipients are expected to report accurately on their use of funds," the GAO notes, "what they are less able to say is what they would have done without the benefit of the program."

Since the Obama administration mixes the mushy jobs "saved" in with the firmer jobs "created," it's hard to tell which is which. But two-thirds of the jobs are attributed to Education Department spending, and these are overwhelmingly public school positions that allegedly would have been lost to layoffs without federal aid.

The New York Times reports that "some school districts said that they might not have actually laid off teachers without the stimulus money." The Times is too polite to add that the rest -- the ones that claim they're sure these jobs would have been cut but for the federal money -- are lying. In the face of uncertainty, recipients of federal money aimed at boosting employment have a powerful incentive to err on the side of reporting more jobs rather than fewer.

Even if recipients are honest, diligent and psychic, the jobs they report are not, strictly speaking, jobs. Instead, they are "full-time equivalents": the number of hours in a quarter for which employees are paid with Recovery Act money, divided by a full three months of work. This calculation invites recipients to inflate their numbers by counting all hours on stimulus-funded projects, instead of just the hours worked by people who otherwise would have been unemployed.

Even when done correctly, the quarter-by-quarter accounting exaggerates the number of "direct jobs" linked to stimulus spending. When President Obama promised the stimulus would produce 3.5 million jobs, most Americans did not imagine he was talking about three-month gigs.

But the most fundamental flaw in the president's stimulus hype is the notion that more jobs are always better (which also underlies his claim that global warming will be a boon to the economy as long as we spend lots of money to mitigate it). According to this standard, if the government really did find a supplier who spends 520 man-hours to deliver one pair of work boots, it should buy as many as possible.