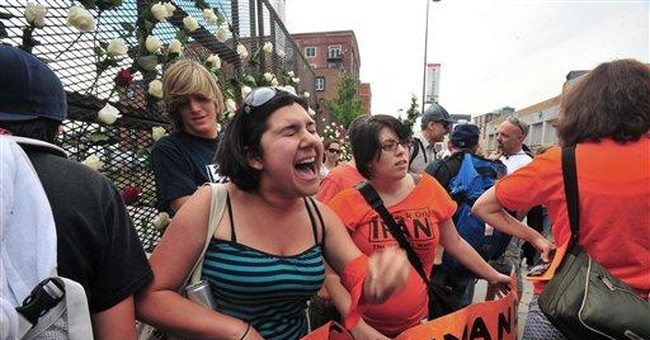 The Republican platform unveiled last week notes in passing that "the Constitution assigns the federal government no role in local education." Yet the same document offers opinions on all manner of local educational issues, including the virtues of phonics, the evils of sex education, the wisdom of merit pay for teachers and the folly of social promotion.

That contradiction illustrates the hollowness of the Republican commitment to "constrain the federal government to its legitimate constitutional functions." The Republicans (like the Democrats) respect the Constitution only when it's convenient.

You might say that's old news. Yet while campaigning for president in 1980, Ronald Reagan promised to abolish the Department of Education. So did Bob Dole in 1996. After two terms of a Republican president who proudly charged in the opposite direction, the most John McCain can muster is a promise to "identify and eliminate ineffective programs" -- that is, to make unconstitutional activities more efficient.

Although the Department of Education is still with us, by threatening to eliminate it, Reagan and like-minded Republicans signaled that they understood some matters are beyond the purview of the federal government. It's hard to find evidence of that understanding in the current GOP platform.

In 1887, Grover Cleveland, a Democrat, vetoed a bill allocating $10,000 to help drought-stricken farmers in Texas, saying, "I can find no warrant for such an appropriation in the Constitution." Nowadays the Republican Party takes for granted the propriety of both "a natural disaster insurance policy" and an "economic safety net for farmers."

Likewise, the GOP platform does not question the legitimacy of the federal government's enormous entitlement programs, saying only that they should be "reformed" and "modernized." Regarding Social Security, McCain does not go even as far as George W. Bush, who proposed letting Americans shift some of their payroll taxes to private accounts. By contrast, the current platform calls for "personal investment accounts which are distinct from and supplemental to" the existing system of intergenerational income redistribution.

Far from shrinking the federal government, the Republicans want to enlarge it, providing "aid to those hurt by the housing crisis," solving "the energy crisis" (undeterred by the Carteresque connotations of that phrase), "expanding access to higher education," seeking "a major expansion of support" for certain kinds of stem cell research, even "returning Americans to the moon as a step toward a mission to Mars." The platform does not explain how these initiatives qualify as "legitimate constitutional functions."

The Republicans are committed to "continuing the fight against illegal drugs," even though that fight, unlike alcohol prohibition, was never authorized by a constitutional amendment. They want to impose national bans on gay marriage, human cloning, assisted suicide and online gambling, even while declaring that "Congress must respect the limits imposed by the Tenth Amendment," which reserves to the states or the people "the powers not delegated to the United States by the Constitution." Despite their eagerness to trample individual freedom in all these areas, Republicans claim, "the other party wants more government control over people's lives," but "Republicans do not."

The Republicans "lament that judges have denied the people their right to set abortion policies in the states." Yet their position that "the unborn child has a fundamental individual right to life" guaranteed by the 14th Amendment implies that the Constitution not only allows but requires a national ban on abortion, which also would override state policy choices.

Defending "the free-speech right to devote one's resources to whatever cause or candidate one supports," the Republicans say they "oppose any restrictions or conditions upon those activities that would discourage Americans from exercising their constitutional right to enter the political fray or limit their commitment to their ideals." Yet their presidential nominee is famous for pushing precisely such restrictions and conditions in the name of "campaign finance reform."

As an indicator of where McCain would take the country after eight years of big-government conservatism, the 2008 Republican platform is not just disappointing. It's incoherent.