Living Well Within the Politics of Crisis: Lessons from the Sages of our Past

Jack Kerwick
|
Posted: Dec 14, 2020 11:40 AM
Share   Tweet
The opinions expressed by columnists are their own and do not necessarily represent the views of Townhall.com. 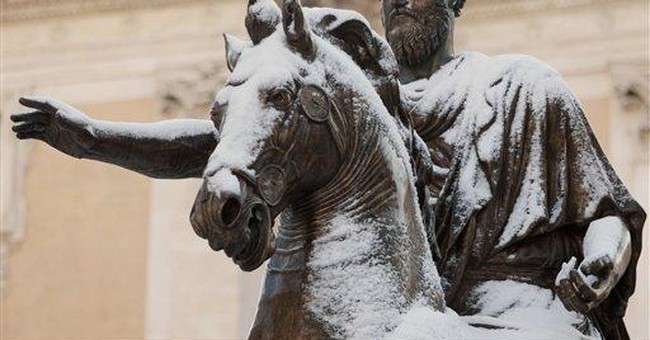 Part I: The Stoics

Life, at least as we know it here on Earth, and since the Fall of Eden, has always posed its share of challenges. Relative to what we Americans who are presently alive are accustomed to experiencing, 2020 has been particularly challenging.

The world’s wisdom traditions, what is more commonly referred to as the world’s “philosophies,” supply us with invaluable resources for not only navigating our way through the often tumultuous waters of human existence, but flourishing in the midst of them.

What’s fascinating is that for all of the cultural, historical, and philosophical differences that divide them, there exists something like a cross-cultural, trans-temporal consensus among the most perceptive members of the human species on certain ideas.  Here, we can focus on one such idea, one that was as succinctly as it was eloquently expressed by Saint Augustine when he said:

“Bad times, hard times, this is what people keep saying; but let us live well, and times shall be good. We are the times: Such as we are, such are the times.”

Ultimately, it is human beings who have the freedom, the power, to choose their perspectives, i.e. their thoughts and their very feelings, regarding the circumstances in which they find themselves.  This, however, is something of which the vast majority of the contemporary inhabitants of Western liberal societies seem to be unaware.  Their obliviousness is at once reflected and enforced by the idiom in which their political discourse transpires.

This is the idiom of what has been called “the Politics of Crisis (POC).” It depends upon the Newtonian concept of “event- causation.”  The idea encapsulated by the latter is that external events, including the actions of other human beings, directly or immediately cause or “trigger” our responses (whether those responses are thoughts, feelings, or actions).  There is no language better suited to the partisanship—what Madison referred to in The Federalist Papers as “factions”—characteristic of modern societies.

To put it simply, because partisans, in an electoral system with centralized government, must compete with their rivals over control of the levers of power, it is necessary for them to assign blame for society’s woes to their enemies while annexing credit for its fortunes to themselves.   Only by way of such a tactic can they hope to manipulate enough people into (ostensibly) allocating them this power in the first place.

Regardless of who is doing the finger-pointing, in which direction, and for whatever reason, the inescapable implication is that the citizens are not, ultimately, responsible for their lot.  They are forever being engulfed by one crisis or another.

The most recent and glaring illustration of this language of event-causation is to be found in the tireless references to “the Pandemic,” rather than to people’s responses to “the Pandemic,” as the cause of the monumental material, psychological, emotional, and social damage that has been inflicted upon countless millions of human beings both here and abroad under the pretext of achieving “victory” over “the virus.”

Yet, in reality, it is we who, by taking counsel of our fears, contributed to the misery of countless numbers of human beings.  It was not any virus.

Adults pride themselves upon being responsible men and women.  Most teach their children to assume responsibility for their actions.

And yet, to judge from our politics, with its language of event-causation, an observer from another planet could be forgiven for thinking that ours is a politics designed by and for adolescents.

Epictetus, though a Stoic, echoes the insight expressed by the Christian Augustine when he says:

“Circumstances do not make the man; they merely reveal him to himself.”

Marcus Aurelius, another Stoic, sounds off on this theme:

“It’s time you realized that you have something in you more powerful and miraculous than the things that affect you and make you dance like a puppet.”

And these two tidbits:

“External things are not the problem.  It’s your assessment of them.  Which you can erase right now.”

“If you are distressed by anything external, the pain is not due to the thing itself, but to your estimate of it; and this you have the power to revoke at any moment.”

“The universe is change; our life is what our thoughts make it.”

Seneca speaks as a true Stoic when he says the following:

“No person has the power to have everything they want, but it is in their power not to want what they don’t have, and to cheerfully put to good use what they do have.”

Of course, this is the same Seneca who said: “Throw me to the wolves and I will come back leading the pack.”

Epictetus asks: “How long are you going to wait before you demand the best for yourself?”

He instructs us: “First say to yourself what you would be; and then do what you have to do.”

“Curb your desire—don’t set your heart on so many things and you will get what you need.”

“The chief task in life is simply this: to identify and separate matters so that I can say clearly to myself which are externals not under my control, and which have to do with the choices I actually control. Where then do I look for good and evil?  Not to uncontrollable externals, but within myself to the choices that are my own[.]”

As the world around us continues to change, we’d be well served to listen to these wise men from centuries ago.  In future essays, we will see that the Stoics were but one collective voice in a consensus composed of various philosophers and transcending place and time.