Jack Kerwick
|
Posted: Mar 17, 2018 12:01 AM
Share   Tweet
The opinions expressed by columnists are their own and do not necessarily represent the views of Townhall.com. 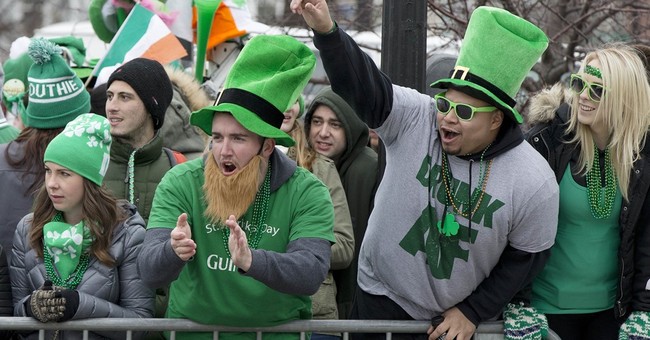 Today, countless numbers of Americans will celebrate St. Patrick’s Day. Many will do so with no small share of adult spirits.

Yet how many of these people genuinely know anything about Saint Patrick?

While it’s true that many of the details of his life are lost in the midst of time, and while it is equally true that some conventional accounts are purely mythological, those who have taken the time to research St. Patrick seem to be in essential agreement over a few things that have more or less been accepted as fact.

(1)Patrick came from a relatively well-to-do Christian family of the 5th century in what is today recognized as Britain.  His father was a deacon and his grandfather a priest.

(2)When Patrick was 16 years of age, Irish pirates descended upon his family’s estate, raiding it. They abducted Patrick and forced him into bondage.  For the next six years, the young man would be made to attend to animals in what is now known as Ireland.

(3)While a slave, Patrick spent much of his time alone. Lonely and fearful, he proceeded to draw closer to the God of his parents’ faith.  In his writings, Patrick remarked that it was at this juncture that, through much prayer, he became a disciple of Christ.  It was also during his captivity that Patrick subsequently claimed to have had dreams in which he made Christian converts of the people of Ireland.

(4)Patrick said that God spoke to him six years into his captivity, assuring him that he would soon return home, for his ship was about ready to sail back to Britain. So, Patrick escaped and walked approximately 200 miles to the port at which the boat that would sail him home was docked.  It took some doing on his part, but the ship’s captain reluctantly allowed Patrick to come on board.

(5)After three days of sailing, the ship landed in Britain.  Over the span of four weeks they walked, hungry and exhausted, through what Patrick would characterize as a “wilderness.”  Patrick prayed for nourishment.  Shortly afterwards, he and his group encountered a herd of wild boar. Consequently, his companions came to esteem him, for in their trials, Patrick continually implored them to trust in God.  The availability of food, in their eyes, vindicated Patrick’s faith.

Eventually, when he was in his early 20s, Patrick made it home.

(6) After he returned to Britain, Patrick continued to study and deepen his Christian faith.  A few years after being home, he had a vision.  Patrick wrote:

“I saw a man coming, as it were, from Ireland.  His name was Victoricus, and he carried many letters, and he gave me one of them.  I read the heading: ‘The Voice of the Irish.’”

Patrick continued: “As I began the letter, I imagined in that moment that I heard the voice of those very people who were near the wood of Foclut, which is beside the western sea—and they cried out, as with one voice: ‘We appeal to you, holy servant boy, to come and walk among us.’”

As to whom “Victoricus” refers, there remains debate. Fortunately, for our purposes, we needn’t concern ourselves with this matter, for the vision seems to have been the final catalyst to have provoked Patrick to enter the priesthood.

(7)Fifteen years later, upon his ordination, Patrick was deployed to be a missionary to the Irish.  Apparently, though, there were already some Christian communities in Ireland; Patrick was entrusted with a twofold purpose.  He was to minister to those Christians that already lived in Ireland and make new Christians from the Celtic polytheists, the majority, that resided there.

(8)Not infrequently, Patrick met with hostility on the part of the chiefs of tribes that he encountered. He would write: “Never before did they know of God except to serve idols and unclean things.”

Yet after his labors, Patrick noted the stark changes that occurred among the inhabitants of the land that once enslaved him.  “But now, they have become the people of the Lord, and are called children of God. The sons and daughters of the leaders of the Irish are seen to be monks and virgins of Christ!”

Patrick wrote that he “baptized thousands of people,” including the sons of kings.  Patrick ordained priests and endowed them with authority to preside over the burgeoning Christian communities.  Wealthy women, persuaded by his efforts, resisted pressure from their families and became nuns.

Patrick’s commitment to his mission must have been second to none.  Because he refused to accept gifts from kings, he had no legal protections. He claimed that, on at least one occasion, he was pummeled, deprived of all of his belongings, enchained, and thrown into jail to await his execution.

Somehow, Patrick managed to dodge the fate that awaited him.  But he also said that “many years later,” he was again a captive—but this time for 60 days. Patrick disclosed no other details regarding this incident.

(9)Patrick converted Ireland into a bastion of the Christian faith.  He did so by utilizing the Irish’s own pagan traditions so as to shed light on the insights of his own faith.  To this end, since the Irish were accustomed to honoring their gods with fires, Patrick used fire to celebrate the Resurrection, Easter.  And he superimposed a sun—a rich Irish symbol—on the cross, hence giving rise to what would become the Celtic cross.

It was eventually said that Patrick used the three-leafed shamrock of Ireland to teach his prospective converts about the Holy Trinity.  The number “three” was of significance for the Irish and, according to Wikipedia, they had many “triple deities.”Furthermore, some suggest that the shamrock itself may have symbolized to the Irish natives the regenerative powers of nature, an idea that was then reframed within a Christian context.

(10)Patrick was among the first figures in history to publically disavow slavery.  In this respect he was centuries ahead of his time.

(11)Though the world knows him as Saint Patrick, and though this is certainly a distinction of which he is worthy, he was never canonized as a saint.

Writer Ken Concannon explains: “There was no formal canonization process in the Church during its first millennium. In the early years of the Church the title saint was bestowed first upon martyrs, and then upon individuals recognized by tradition as being exceptionally holy during their lifetimes.”

Patrick became a saint “by popular acclaim, probably with the approval of the bishop.”

(12)March 17, the day that we celebrate St. Patrick’s Day, is the anniversary of this great Christian missionary’s death. Scholars place the time of his death anywhere between 460 and 493.

So, as you drink green beer and eat corn beef and cabbage this St. Patty’s Day, bear in mind that it is a great man of God to whom you’re toasting.