Jack Kerwick
|
Posted: Jun 01, 2017 11:01 AM
Share   Tweet
The opinions expressed by columnists are their own and do not necessarily represent the views of Townhall.com. 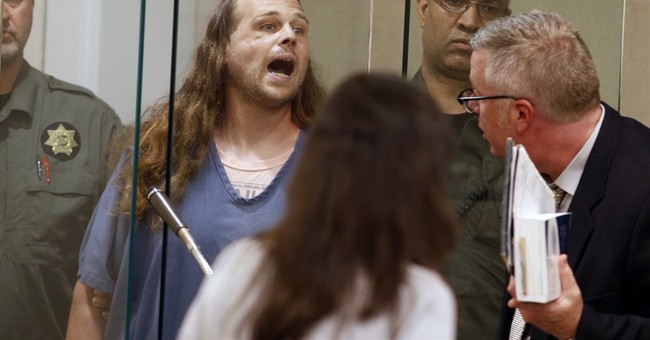 In a recent article on the “white supremacist,” “Islamophobic” “terrorist” attack in Portland that occurred over the Memorial Day weekend courtesy of a “Trump supporter,” I noted that, as of yet, we knew remarkably little of what actually happened.

That is, we knew not nearly enough to substantiate the leftist press’s angle on the events that transpired on a Portland train.

Jeremy Christian went on an “anti-Muslim” rant against two Muslim women, so went the official line.  Three men, “heroes” is how they were being described, came to their defense.  The men stood up to “racist hate.” For their efforts, the “white supremacist” and “Trump supporter” stabbed them, murdering two of them.

I had questions, but there is one question the answer to which could make all the difference as to whether Christian is guilty or not of murder: In what exactly did the intervention of the good Samaritans consist?  If Christian did not pose an imminent bodily threat to anyone, and if the three passengers got up in his face or otherwise aggressed against him, then while their intentions may have been noble, he still could have been justified in thinking that his well-being was imminently imperiled.

The night that my essay was published, an attorney from Portland sent me a copy of the affidavit for this case.  It answered some of my inquiries.  Additionally, the wording of this legal document confirmed my skepticism concerning the PC template through which the media has labored to process this event.

Christian, who was “seen taking large drinks from a bladder style container of purple liquid that [was] later identified by [Christian] as Sangria wine,” proceeded to shout “statements seemingly targeted at the girls and at others that included: ‘Get the f**k out!’ ‘Pay taxes,’ ‘Go home, we need American here!’ ‘I don’t care if you are ISIS,’ ‘F**k Saudi Arabia!’ and ‘Free speech or die.’”

Evidently, Christian didn’t specifically target the two girls, instead launching into a rant that “involved” comments that could be construed as hostile to Islam but which, as this sampling of quotations makes clear, were not limited to such remarks.

And this account dovetails well with the fact that, just one day prior, Christian, while riding the same train, was indeed captured on video cursing Islam, yes, but Judaism and Christianity as well.  A staunch atheist, Christian thought that monotheism—not Islam only, but all forms of monotheism—is the biggest problem facing the human race.

The two young women, incidentally, simply moved their seats away from him.  It doesn’t sound as if he pursued them.

Media Claim #2: The two men who lost their lives at the end of Christian’s blade, and the third who was stabbed (but who survived), risked their lives for the sake of combatting “hate” and in order to spare the “two Muslim females.”

FACT: According to the affidavit, this is not true.   The three men who are being hailed as “heroes”—Taliesin Namkai-Meche, Micah Fletcher, and Ricky Best—didn’t initially mix it up with Christian.  Rather, it was a man named “Mr. Forde” who initially tried to “intervene and verbally deescalate the situation [.]”  He didn’t “stand up to hate” or, necessarily, seek to protect “two Muslim women.”  Mr. Forde simply tried to calm Christian. He was “unsuccessful,” for Christian “continued shouting.” Forde recalled him saying, among other things, something about “decapitating heads.”

The young women “were clearly alarmed” by Christian’s outbursts and “move [ed] away” from him.

It was only after Forde’s unsuccessful attempt to diffuse his volatility that Christian made “a sudden move in the direction of” Namkai-Meche who, the affidavit implies, was an innocent bystander until this point.  Namkai-Meche was sitting down.  When Christian moved in his direction, understandably and perhaps with an eye toward preventing himself from being pummeled upon, he stood up.  This angered Christian, who responded by getting into Namkai-Meche’s face and shouting: “Oh, do something bitch!”

It was at this point that Micah Fletcher stood up next to Namkai-Meche.  This apparently incensed Christian more. Yelling, “Do something!” he “shoved Micah Fletcher in the chest.” Christian began pulling out a “folded knife” from his pocket.  Fletcher shoved Christian back. The latter stumbled. Christian challenged Fletcher to “hit me again.” Fletcher told him to get off the train. Christian then swung at him with his knife out, stabbing Fletcher in the neck. Immediately, he turned and stabbed Namkai-Meche in the neck.  But it is when Christian went in for Namkai-Meche’s neck the second time that Ricky Best, the military veteran that Christian would murder, intervened to stop the stabbing of the two men.

Christian “pushed” Best into Namkai-Meche, who was trying to “staunch” his bleeding, and then proceeded to stab both of them.  Fletcher was as well trying to attend to his own wound as he left the train car to seek medical help from passengers on the platform.

Namkai-Meche and Best would die from their injuries.  Fletcher’s wound missed being fatal by mere millimeters.

Upon spitting, Christian remarked: “I’m tearing out mother**ker’s throats, you think I give a f**k who I spit on.”

“I can die in prison a happy man.”

Christian said to one of his victims: “I told him, you ain’t gonna heal punk.  And he still wants to put hands on me.  Die bitch. F**king die. Stupid mother**ker. That’s what liberalism gets you.”

“I hope they all die. I’m gonna say that on the stand.  I’m a patriot and I hope everyone I stabbed died.”

Notice, in this litany of rantings, not a single syllable could remotely be construed as “anti-Muslim,” let alone “white supremacist” or “racist” (it was a white-on-white attack, after all).

Christian is vermin who deserves the ultimate penalty for his crimes. His victims deserve our sympathy.  Ricky Best acted heroically in trying to stop two men from being stabbed, and Micah Fletcher acted honorably and bravely in standing alongside Taliesin Namkae-Meche after the latter acted sensibly in rising to ward off what undoubtedly appeared to be an imminent attack on his person by Christian.

Yet none of these three men risked and sacrificed their lives in order to protect two Muslim women.  First, there weren’t two Muslim women.  Second, no women were in need of being rescued, for Christian was on a rant that wasn’t obviously directed toward them and which included comments that had nothing to do with Islam. The only person who did try to persuade Christian to stop his tirade—Mr. Forde—is receiving relatively no media coverage, and is certainly not being hailed as a hero.  Forde, clearly, doesn’t fit the narrative.  He also was unharmed.

Media Claim #3: Christian was a “white supremacist” and “Trump supporter.”

FACT: This claim is the most bogus of all.  Christian’s Facebook posts leave no doubts as to where his political allegiances lay.  He was an enthusiastic Bernie Sanders supporter, one who was all too willing to elect to the presidency the first Jew that would ever occupy that office.  Christian despised both Donald Trump and Hillary Clinton.  The former he accused of wanting nothing more than to make America “white again”—a peculiar reason for a “white supremacist” to dislike anyone, much less a man who aspired to assume the power of the American presidency.

It’s a strange sort of “white supremacist” who expressly denies that he’s a “racist,” going so far as to mention that he has non-white family members and threatening to “knock out” anyone who would dare to call him a “racist.”

It’s a strange sort of “white supremacist” who admires Malcolm X, someone who, by Christian’s lights, would have been a true “revolutionary”—unlike Martin Luther King, who he dismissed as a “plagerizing [sic] weak-sauce revolutionary.”

It’s a strange sort of “white supremacist” who, in rallying support for Bernie Sanders, writes: “Power to the People!!!” and “End The Prison And Military Industrial Complexes!!!”

It’s a strange sort of “white supremacist” who tries to discourage others from being “Racist” and, instead, encourages them to become “a Misanthrope” (i.e. to hate, not on the basis of race, but universally?).

It’s a strange sort of Trump supporter that describes Sanders as “the one genuine candidate since Ross Perot and maybe Nader [.]”

It’s a strange sort of Trump supporter that self-describes (after Bernie got railroaded) as “a totally apolitical Born Again Nihilist.”

It’s a strange sort of Trump supporter who invites others to join him “in smashing some Clinton Crime Family and Trump Mafia supporters;” admits that between Clinton and Trump, the former is the candidate who he “hate [s] the least;” and refuses to vote for Trump. On November 11, 2016, Christian posted: “Just want all my FB Peeps to know I could not bring myself to vote Trump like I said I would.  I abstained from voting for the first time in my adult life.”

It’s a strange sort of Trump supporter who asks: “Why f**k aren’t we out in the streets demanding a President [Sanders] that has a positive poll rating???”

It’s a strange sort of Trump supporter who says that he “can’t wait for Jeff Sessions to be assassinated for his unamerican hate speech,” and who calls in the same post for the murder of “as many DEA Agents” and “as many BOP Guards in the Federal Prison” as possible.

It’s a strange sort of Trump supporter who had on multiple occasions been ejected from Trump events and who had been reported to the Portland Police by Trump supporters.

The left has been on the hunt for The Great White Oppressor for a long time. The need for a “white terrorist,” and, specifically, a terrorizer of Muslims, was undoubtedly felt all that much more acutely this past week as England fell prey once more to but another Islamic terrorist attack and jihadists in Egypt inaugurated Ramadan with a bang by slaughtering dozens of Christians, including Christian children. So what did the punditry class do?

It invented a “white supremacist/terrorist,” transformed him into a Trump supporter, and created some Muslim victims.

But this meme, like so much else emanating from the left these days, is a lie.