Jack Kerwick
|
Posted: May 22, 2017 11:37 AM
Share   Tweet
The opinions expressed by columnists are their own and do not necessarily represent the views of Townhall.com. 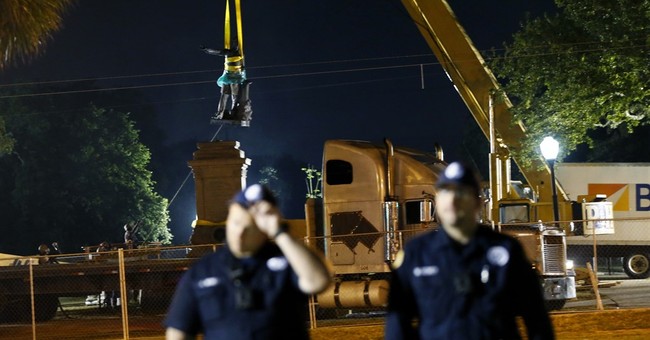 A statue of Robert E. Lee is the last of four statues commemorating the Confederacy that leftist activists in New Orleans succeeded in bringing down this past weekend.

All Confederate symbols are monuments to “white supremacy,” the left assures us.  This is the justification for the campaign to erase them from public view.

Pro-Confederate Southerners, however, have always maintained that they have never been interested in memorializing “supremacy” of any kind.  Rather, their symbols are expressions of a rich and storied cultural history.  Statues such as those of Jefferson Davis and Robert E. Lee that were just razed in the Big Easy are monuments to patriots and heroes who were willing to forego all in order to conserve that culture for future generations.

“Heritage, not Hate,” is how the pro-Confederate South has been putting it for decades now.

And while the account standardly offered by heritage-affirming Southerners is true as far as it goes, the reality is that it does not go nearly far enough.

The truth is that the attack on Southern cultural symbols is an attack on American symbols.

In the last resort, the movement to strip the public consciousness of any and all affection for the Confederate heroes that sought to secede from the Union is an anti-American movement.

Southern secessionists repudiated the Union.  They never repudiated America.  More specifically, they repudiated the presumed authority of a central government that, they were confident, had exceeded anything permitted to it by the Constitution.

But those Southerners who sided with the Confederacy never rejected America.  Quite the contrary, for they saw in themselves the spirit of their ancestors come alive again: Just as such estimable Southerners as George Washington, Thomas Jefferson, Patrick Henry, James Madison, and many more sacrificed all so that Americans could secede from the oppressive government of England, so too did their posterity below the Mason-Dixon line “mutually pledge” to one another their “Lives,” “Fortunes,” and “Sacred Honor” so that they could secede from an oppressive federal government.

Those who fought for the Confederate States of America, like the act of secession itself, are as American as the proverbial apple pie.  Confederate soldiers are American soldiers. From at least the time of the late 19th century, beginning at the close of the Spanish-American War (in which, as in all American wars, Southerners fought with distinction), Confederate veterans began receiving recognition that they were American veterans.  A few decades later, through an act of Congress, they were endowed with the same status as Union soldiers. By the 1930s, they were eligible to receive pension benefits from the United States government, and in the 1950s, the spouses and children of Confederate veterans became just as eligible to receive these benefits as their Union counterparts.

The Confederates were American patriots.  Never has there been a group of Americans that so embodied the Spirit of ’76, the love for liberty exemplified by the country’s Founders.   That there were some Southern secessionists that had an interest invested in preserving slavery is certain.  That they constituted, in the words of one Confederate soldier whose letters were recovered, “a very small minority” is equally certain.  Indeed, the vast majority of Confederate warriors, like the majority of Southerners, did not own slaves.

In fact, a number of eminent Confederate generals, like, for example, General Lee, did not own slaves.  Lee had inherited seven or so slaves, but he freed them long before the War Between the States erupted.

Not only, though, did neither Lee nor most of his compatriots in Dixie care to defend slavery; they didn’t even want to secede.  Yet they viewed secession as a “necessity,” as Jefferson Davis characterized it in his inaugural address to the newly formed confederacy, the only means available for escaping the compact that the Northern states, via the central government, had violated.  Lee, for one, remarked that unless the individual states retained their sovereignty, their Constitutional rights, “free government” itself would be no more and the American government would become “aggressive abroad and despotic at home.”

It is nothing short of a national disgrace that American patriots have permitted the most arrogant of activist-ideologues to wage a cultural-cleansing campaign against the South.  Mainstream “conservative” talking heads and scribblers have said little to nothing.  Doubtless, their neglect of this issue has something to do with their belief that it is only Southerners who the left seeks to demoralize and culturally-destroy.

But as I have tried showing, they couldn’t be more wrong.  The left knows this, even if Yankee “conservative” commentators choose to ignore it.  The attack on Southern heritage is an attack on American heritage.  Lee, Davis, and other gallant men that hailed from the South and who fought in the Confederacy are easy targets at the present moment precisely because both Southern and Northern “conservatives” have failed miserably in making this point.

Actually, even I—a white, Christian, heterosexual man in his mid-40s who was born, raised, and continues to reside in New Jersey—understates the nature of the left’s campaign.  The latter is indeed an assault upon American heritage, but America—or “AmeriKKKa,” as the enemies of all things Confederacy have been calling it for 50 years—is despised by the left precisely and only insofar as they view it as the emblem par excellence of all that they despise in Western civilization itself.

From the standpoint of the left, the history of the whole Western world is a history of “racism,” “white supremacy,” “sexism,” “colonialism,” “imperialism,” “homophobia,” “xenophobia,” “Islamophobia,” and any and every other “ism” or “phobia” in the leftist’s litany of cardinal moral offenses.

The militant left’s assault on the Confederacy is one battle in a much larger war against the West.  From within its frame of reference, the only difference between Southern Confederates and the rest of the West is that the Confederate heroes are currently more vulnerable prey. The logic of the left’s vision is inexorable: All historical figures of European ancestry who the cultural cleansers deem insufficiently “progressive” must be, as best possible, scrubbed from public memory.

Both Northern and Southern patriots alike had better realize this.